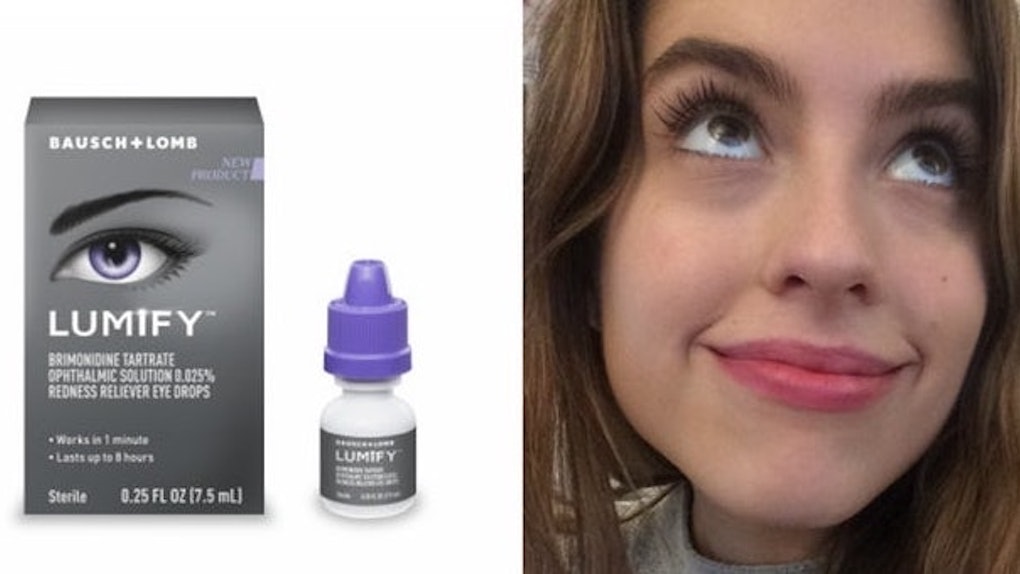 I recently attended a press event celebrating the launch of Bausch and Lomb's new eye drops, Lumify. Before you switch tabs from my Lumify eye drops review, rest assured that this isn't a story about any old eye drops: celebrity makeup artist, Vincent Oquendo, and A-list plastic surgeon/ophthalmologist, Dr. Melissa Toyos were touting the product's ability to brighten lackluster and/or bloodshot eyes. In other words, these eyedrops are formulated to make your eyes look like the Snapchat filter version of themselves.

I'm convinced that I never fully recovered from bleary eyed all-nighters of my college years; since then, the whole bright eyed and bushy tailed look has eluded me. A more plausible reason, perhaps, is that I (like so many of us) stare unblinkingly at a computer screen for the better portion of my day, stay up too late, and watch too many tearjerking proposal videos (that last one just me?). Whatever the cause, bloodshot eyes don't jive with the types of the makeup looks I like to go for. That said, I didn't realize I could benefit from more luminous eyes until I was presented with that option; that a quick drop of a solution could put a proverbial twinkle in my eye. The whole thing seemed magic.

Except it's less sorcery, more science. Lumify was developed by eye doctors and has withstood numerous clinical safety trials. In December 2017, it was approved by the FDA. Before I discovered Lumify, I had heard rumblings that some makeup artists use cosmetic eye drops backstage at Fashion Week, but after some very scientific research (cough, reddit rabbithole) I learned that many cosmetic eyedrops pose the risk of rebound redness — a phenomenon where your eyes get so used to eyedrops that they become even more red than before you used the eyedrops in the first place. Luckily, Lumify is different; in fact, it was specifically formulated to eliminate the risk of rebound redness. Plus, it's safe for contact wearers and anyone over the age of 5. In short, this stuff is pretty darn benign in the risk department.

Prior to trying Lumify, my only experience with eye drops had been trying some gnarly minty ones my high school boyfriend poured into my pupils. To say they stung like crazy is an understatement. I swore off eye drops, we broke up (unrelated), and I went about my life — until, at the Lumify launch event, I was presented with a sample of the stuff and instructed to give it a go. Immediately, I recoiled at the thought of writhing in pain in front of my industry peers and said as much. In response, I was promised they wouldn't sting. Et voila! I dropped them into my eyes and there was no writhing to be had. Instead, the solution felt how eyedrops should feel (or at least how I'd like them to feel): non-irritating, soothing.

Lastly — yes, I saved the verdict for last — this stuff actually lives up to its claims. No hemming, hawing, or head-cocking about it. It's amazing to watch your eyes transform from irritated and red to clear and blindingly white within a minute; I've evolved from looking allergic to looking angelic all within the time it takes me to brush my teeth. Plus, the sparkly effects last for up to eight hours (I usually only apply once if I'm using them on any given day).

Take a peek at my before and after shots, above. My eyes are beacons of light in the latter!

I'm so impressed with this stuff, in fact, that I that I keep one bottle in my purse and one bottle in my makeup bag (which is saying something considering the number of products I stuff into bags and silo to the back of my closet). Not to mention, the bright eyed effect plays well with literally any eyeshadow look.

Starting now, you can snag Lumify at most drugstores for around $15 for a 2.5ml bottle. It's not the cheapest thing in the world, but hey — you can't put a price on looking bright eyed and bushy tailed.