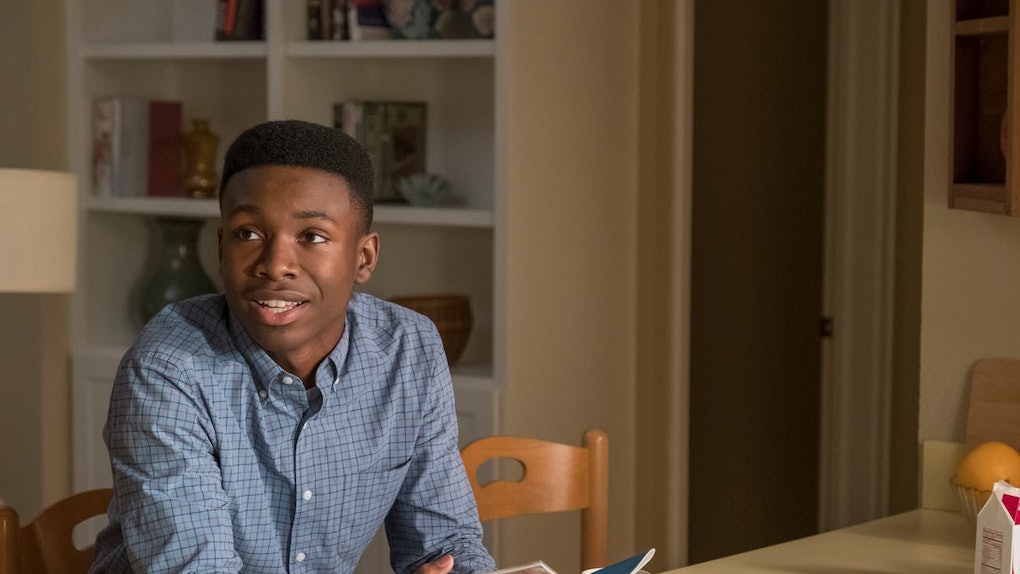 'This Is Us' Season 3 Episode 2 Shows Randall's College Acceptance, So It's Not All Sad

When we last saw the teen versions of the Big Three on This Is Us, they were in mourning for Jack. Although the end of Season 2 shared a glimpse of Randall and Kate recovering together a few months later, the family's immediate aftermath of Jack's death was saved for the third season. A sneak peek of this week's episode, "A Philadelphia Story," is now available, and This Is Us Season 3 Episode 2 shows Randall's college acceptance weeks after the loss of Jack. The news seems tinged with sadness about his absence, but it looks like we won't have to break out too many tissues during the show this week.

In the short clip from "A Philadelphia Story," Rebecca and the kids are seen in temporary housing after losing their home in the Super Bowl fire. Already confiding in Randall in the way that the present-day storyline has told us about, Rebecca hopes to find a new house soon. She then reveals that a fat envelope from Howard University has arrived for Randall. Months before, Randall visited the historically black college with Jack, who topped off the D.C. trip with a stop at the Vietnam Veterans Memorial.

No surprise, but Randall has always been a bit of a genius, and Howard has accepted him. As a teary Rebecca celebrates with him, Kate walks in and hears the news. Randall insists that her own acceptance letter from the Berklee College of Music is on its way, but Kate balks, suggesting that she never sent in her application after losing Jack.

While the moment is finally a happy one for the family after such a traumatic experience, viewers can easily figure out that Randall's college decision is probably far from complete. We know that Kevin left Rebecca behind after high school, presumingly moving to the West Coast immediately. Although the show has hinted that Kate soon followed, Season 2 revealed that she and Randall were at home with Rebecca for the first year after Jack's death. It's a sad thought, but it looks like neither Randall nor Kate actually attended their dream colleges.

The background of the video clip also shows a couch and TV setup that resembles last season's flashback of Randall and Kate's Sex and the City marathons. Not only does the show's timeline suggest that both of them stayed home for school, but it also seems that the Pearsons were stuck in their rental home for far longer than Rebecca hoped. There's also the mystery of the episode title, "A Philadelphia Story." In the '90s, the Pearsons lived in Pittsburgh, and Philadelphia is about a five-hour drive away, so Randall choosing a school in Philly rather than D.C. isn't exactly the definition of "staying home." So where did Randall go to college if he possibly never attended Howard?

The episode teaser also reveals that Kate and Kevin are struggling more with Jack's death than Randall seems to be. While Randall had a tender, affirming moment with Jack before the Crock-Pot caught on fire, Kate felt responsible for their dad's demise and Kevin never learned about the loving, apologetic note Jack left for him in the house. The promo shows Kate overeating to cope as Kevin begins drinking. Meanwhile, in the present day, Toby shows symptoms of his antidepressant withdrawal.

Randall getting into Howard is a sunny reprise from some of the show's darker plots, but as with every story, it seems to come with plenty of complications. Season 3 of This Is Us continues on Tuesday, Oct. 2, at 9 p.m. ET on NBC.