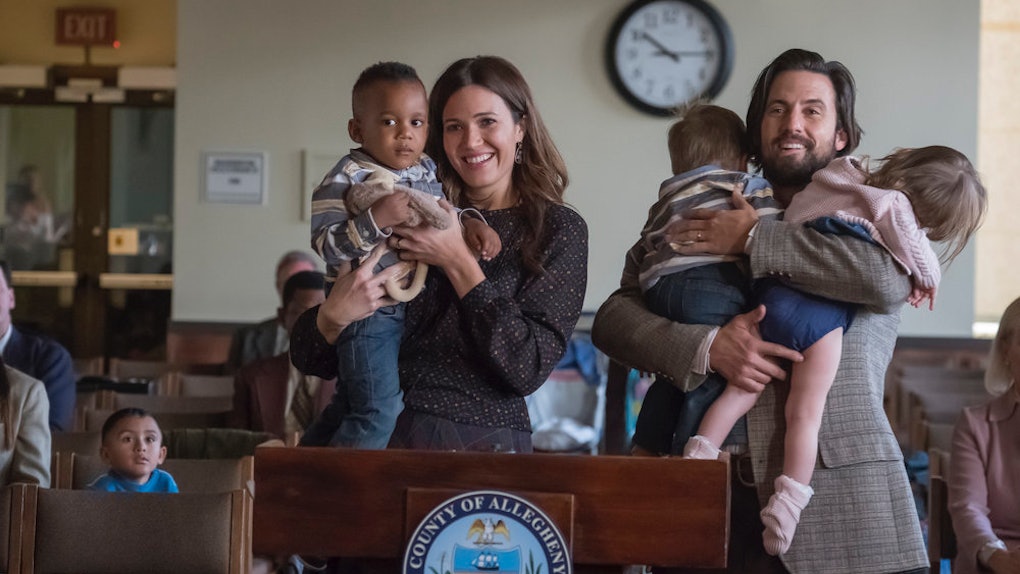 Wipe away your tears! Another emotional episode of This Is Us has come to an end. But as always, our episode buttons with a next time trailer. Next week's episode, entitled "The Most Disappointed Man in the World," looks to provide us with several time jumps, including one with a toddler-aged set for The Big Three. Let's take a look at everything we know, including the This Is Us Season 2 Episode 7 promo.

Randall adjusts to the foster system. Kate and Toby take the next step in their relationship. Kevin visits Sophie in New York. Jack and Rebecca finalize Randall's adoption.

And here's the trailer.

So, three storylines are up for bat next week, two of which seem to have little to do with the name of the episode.*

The big one of course, is Kate. After a week off from her modern day storyline to give us a glimpse of Halloween 2008, we're back to her and Toby and the oncoming baby, and what looks like it could be a justice of the peace style "Let's just get married and be done with it" ceremony. That certainly fits the "taking the next step in their relationship" referred to in the synopsis.

And though I'm sure there are many who want to see Kate have that white wedding, it's also understandable that between the pregnancy, the stress, and the money a modern day wedding costs, she and Toby would opt for something quick, dirty, and simple. A nice change from the "Sad Kate" stuff the show usually insists on giving us.

Toby and Kate may even think they can get away without having Kate's entire family there, but if we know This Is Us, that's not happening. Some combination of Kevin and Randall and Rebecca will find out and crash it. Kate may have the happiest day of her life, but the show never seems to want to give it to her the way she envisions it.

Our second storyline features Randall and relates back to the synopsis of him "getting used to the foster system." From the looks of it, he's visiting Deja's mom in jail and is giving her the business about her inability to be there for her daughter. So far we know that Deja's mother has spent her life in and out of jail, and that whatever she did this time, it's much worse than usual, though the show hasn't revealed exactly what that is. Perhaps next week we'll find out.

We assume since Kate and Randall will be returning to present day, Kevin will too. But since there's only a short glimpse of him, we'll have to hope the "visits Sophie in New York" will maybe help him admit he has an addict problem.

Then there's the main flashback for this week, which involves Rebecca and Jack's fight to adopt Randall, even though they are white and he isn't. As we see from the trailer, the judge overseeing the adoption is less than convinced this sort of mixed family can work in Reagan's America. (The kids look to be toddlers, so this is 1981/82, which is an age we've not seen them at before.)

Of course, we know the outcome, as Jack and Rebecca did successful adopt Randall. But it will be interesting to see the monkey wrenches that were thrown in their way and how they handled it. From the voice over, this looks like Rebecca's chance to stand up and fight for her right to take the boy in and be his mother, further cementing him into their family.