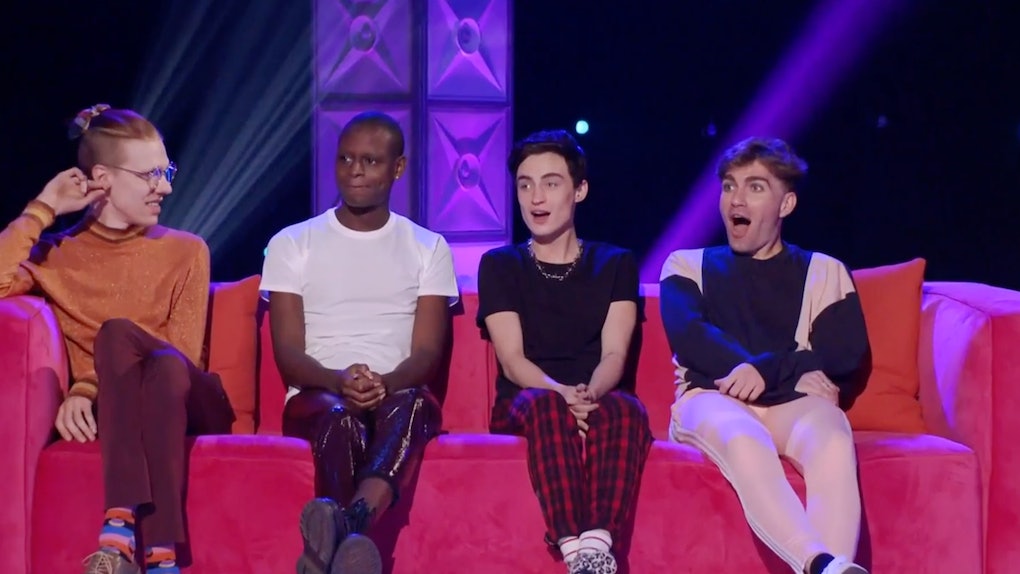 This Clip Of 'RuPaul's Drag Race' Season 13, Episode 10 Is Full Of Psychic Energy

The competitive atmosphere of Drag Race is most conducive to serving fierce looks, but it's still produced a few romantic storylines in its time. Back in Season 5, Jinkx Monsoon confessed her crush on Ivy Winters. Then, in Season 11, Brooke Lynn Hytes and Vanessa Vanjie Mateo heated up the Werk Room with their fling. Now it sounds like love — or at least a little spark — may be in the air once more. In a first-look clip of RuPaul's Drag Race Season 13, Episode 10, the queens get a psychic reading that reveals *a lot* about how they feel about one another.

Following a memorable Snatch Game and the elimination of Elliott with 2 Ts in the March 5 episode, the remaining eight queens are closer to the crown than ever. But before they can get started on the all-important makeover challenge, RuPaul surprises them with a psychic reading. In the first look at Episode 10, psychic Char Margolis sits down with the queens and delivers some major revelations. Margolis is able to channel the spirits of Tina's father as well as Utica's cow Clara, and she even picks up on Kandy not exactly hitting it off with Rosé at the beginning of the competition.

But the biggest moment came when she clocked Denali and Rosé's bond. The two queens have been very close the entire competition, and Margolis asked if they had a crush on one another. "Maybe a little one," the two admitted.

While Margolis' reading confirmed Rosé and Denali are incredibly close, fans shouldn't expect them to become anything more than friends in Season 13. Rosé is quick to clarify in the clip that nothing is going on between them, since she has a boyfriend back home. She's spoken about her committed relationship in the past, too. In Drag Race's Feb. 26 documentary special Corona Can't Keep a Good Queen Down, Rosé revealed her boyfriend is a hospital worker who has been on the front lines helping out during the pandemic.

The queens don't have long to ponder the revelations of the psychic reading anyway. After their meeting with Margolis, Ru reveals the eight queens will be paired up for their next challenge based on who they could learn the most from. And — plot twist — instead of making over a stranger like in past seasons, because of the coronavirus pandemic, the queens will be making over one another.

Get ready for a makeover episode like no other when Episode 10 of RuPaul's Drag Race Season 13 airs on Friday, March 12, at 8 p.m. ET on VH1.