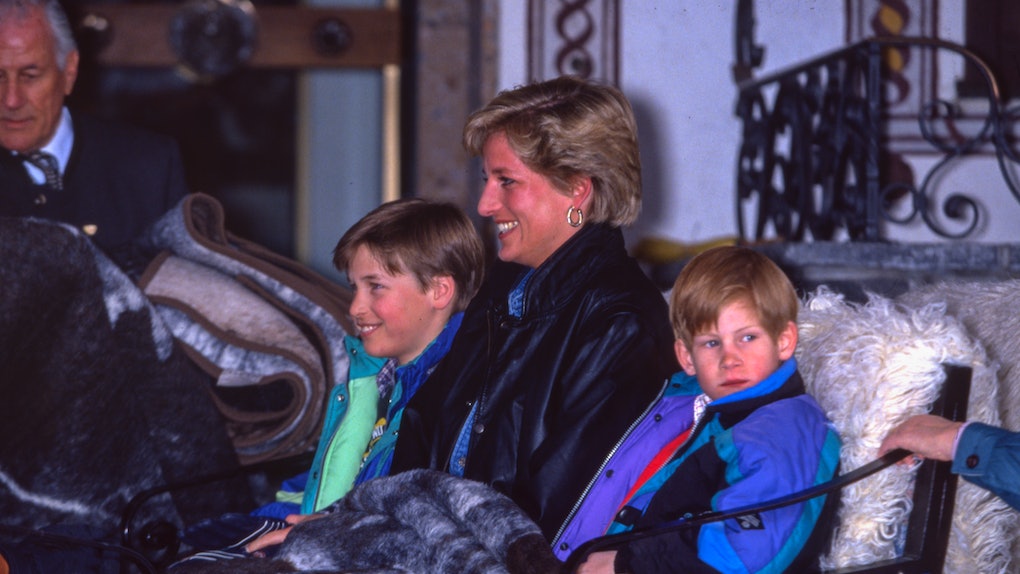 Royal blood runs deep, but family genes apparently run deeper. More than two decades after Princess Diana died in a tragic car accident on Aug. 31, 1997, there are still constant comparisons between her and her two sons, Prince William and Prince Harry — and for good reason. On Saturday, Nov. 7, it was a childhood photo of Princess Diana that had fans swooning over how much the boys resemble their mom.

Princess Diana's brother, Charles Spencer, took to Twitter on Nov. 7, to share a rare, throwback photo of himself and his big sister. In the sweet snap, Diana, wearing an adorable pink-striped dress, has her arm draped around her little brother, who is wearing blue shorts, a polo shirt, and a pair of white socks with sandals. The adorable pic got a lot of attention from Spencer's followers, who shared fond memories of Diana and also drew attention to the fact she looks so much like Harry and William.

"I miss Diana so much. She taught us all how to truly love & led by example," one person wrote. Another shared: "Her legacy and influence remains and in fact gets stronger and stronger as years go by. Its unbelievable how much she is still loved. She showed the way, and she is dearly missed by charities. She could move mountains."

While the photo definitely drew comparisons to Harry and William as kids, some Twitter users also saw a resemblance between Diana and her grandkids, especially William's children George and Charlotte.

Despite losing their mother at such a young age, Prince William and Prince Harry keep Diana's memory alive in various ways. Earlier this year, William penned an emotional letter to the people who run an anti-bullying charity named in her honor to express his gratitude for the work they do.

"I wanted to write to send my support and thanks to all the staff, volunteers and supporters of The Diana Award," William wrote on May 14. "My brother and I remain ever appreciative of the work you do to foster, develop and support young people, particularly at this time of uncertainty."

There's no doubt Diana would be incredibly proud of the two men and their beautiful families.

More like this
As @Royal_Suitor, Here's Why I'm Dedicated To Defending Harry & Meghan
By R.S. Locke
Madison Beer's Response To Constant Online Bullying Got So Real
By Brandy Robidoux
Meghan & Harry's Open Letter For Archie's 2nd Birthday Asks Fans To Pay It Forward
By Brandy Robidoux
Stay up to date