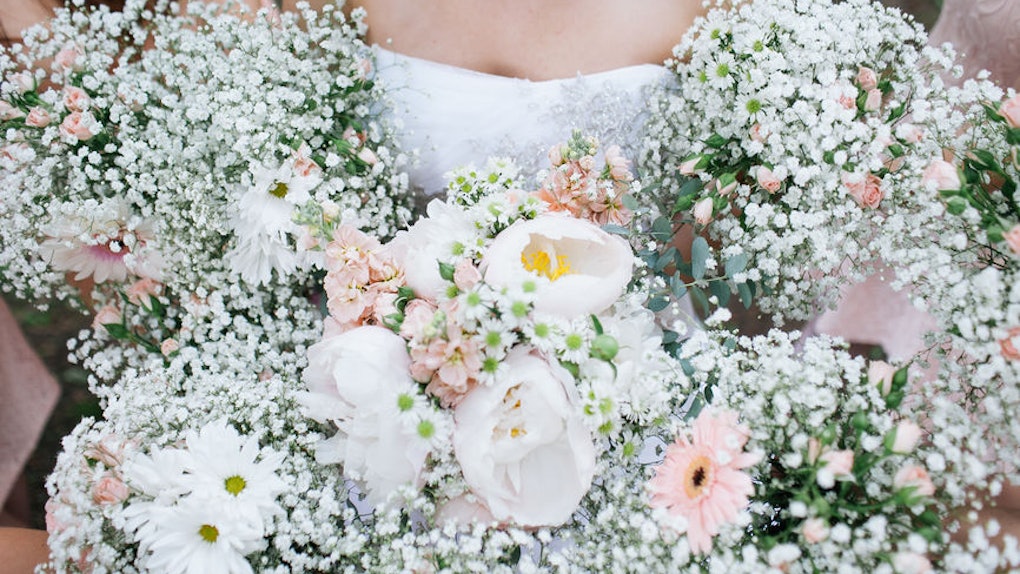 This Bride Wanted To Replace Her Maid Of Honor For Not "Losing Baby Weight," & Seriously, WTF

During the summer, it's not uncommon to have a wedding on your calendar every other week. It's wedding season! And while they're mostly joyous occasions, sometimes weddings can be more drama than anything else, unfortunately. Take, for instance, the story of a real bride who actually threatened to replace her maid of honor for not "losing baby weight". No, that's not an exaggeration... it really happened, and it's ridiculous. Because as if carrying a baby and giving birth isn't emotionally draining and hard enough.

In a since-deleted Facebook post, a bride took to a mom advice group on the social media site to ask if it was OK to replace her maid of honor, Fox News reports. The reason? Said maid of honor had a baby, and hadn't lost her baby weight fast enough for the bride's liking. Per Fox News, the deleted post read, "So my friend who is my maid of honor in my wedding recently gave birth and she hasn’t lost the baby weight."

Obviously, there's so much wrong with ever wanting anyone in your wedding to lose weight for the big day, but the fact that this bride expected someone who just gave birth to lose weight quickly made the internet seriously mad.

According to Fox News, a Facebook user had the great idea to screenshot the post before it was deleted, and then shared it to a wedding-shaming Facebook group, where it was obviously torn to shreds. Because seriously, it's a lot.

"She may not even fit her dress," the bride continued, in the original post. "I refuse to have it altered again. It was already altered multiple times for her and she said she’d fit into it. She said she has a back up dress and I’m saying hell no to that. I’m not fat shaming but come on. My wedding is only one day and I’m not having it ruined by her or her baby weight."

Honestly, can you even believe that? First of all, no wedding would be "ruined" by someone's weight, no matter what. Second of all, bodies are never not beautiful, at any weight, shape, or size. After childbirth, it can take six to 12 months for a woman to return to her pre-pregnancy weight. It's unknown how long ago this bride's friend gave birth, but still. It's just unrealistic for the bride to want her friend to lose weight in time for her wedding, all just to fit into a dress. (And she had a backup! Like... what?!)

Obviously, the internet was not too kind to the bride, who asked if it would "be wrong to have someone else take her place" in her original post. As Fox News reported, the comments on the post ranged from "I hope she trips while walking down the isle," to "This bride is an idiot." Sure, wedding planning is stressful, and it's only natural to want your big day to be perfect. But you can't control a friend's weight, nor should you want to. People are so much more than any number on the scale, and that's that.

More like this
Zac Clark & Tayshia Adams Are Wedding Planning & I’m So Pumped
By Lydia Wang
When Are Ariana Grande & Dalton Gomez Getting Married? Here's The Reported Tea
By Corinne Sullivan
TikTok's Viral Eye-To-Eye Challenge Is A Wholesome Game To Play With Your BFFs
By Marisa Casciano
Stay up to date