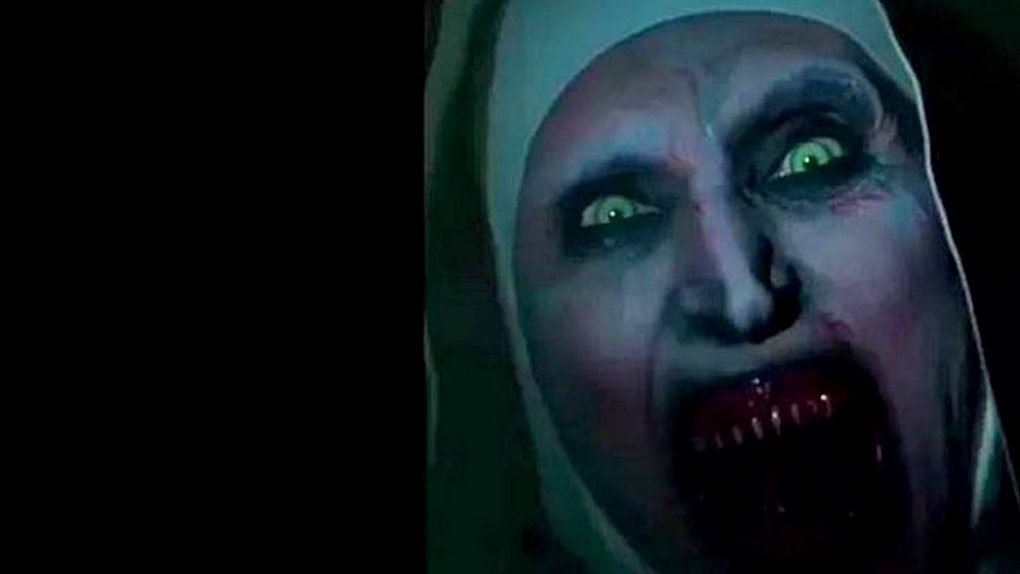 This Ad For 'The Nun' Is So Scary, YouTube Had To Remove It

Most people love a good scare every so often, and the horror movie genre has actually been booming lately thanks to critical and popular successes like Get Out, The Quiet Place, and Hereditary, but the newest buzzy horror flick may be taking things a bit too far. The most recent ad for The Nun is so scary that YouTube had to remove it.

If you have not heard of The Nun, it is a new horror movie about to come out that stars Taissa Farmiga (American Horror Story) as a young nun who is sent to investigate the mysterious suicide of a nun at an abbey in Transylvania. As you can probably already tell, things don't exactly go great for everyone looking into this nun's death, as the demonic ghost of the dead nun lashes out on the new visitors. The movie serves as the fifth installment in The Conjuring series of horror movies, and is a direct spinoff of 2016's The Conjuring 2, which centered on the same demonic entity.

As is par for the par for the course with these horror movies, the trailer for The Nun includes a shocking jump-scare, in which the demonic nun suddenly jumps out from a corner at Taissa Farmiga's character. That is all well and good for a horror movie trailer, but not so much for a YouTube ad that you had no idea would be playing before whatever video you wanted to watch.

Over the weekend, people began to complain about a short YouTube ad for The Nun that caught a lot of viewers off-guard. One person posted a warning to Twitter to prepare unsuspecting viewers for the jump-scare ad.

The now-banned The Nun ad shows a computer screen with its sound being turned down, before a close-up of the demonic nun's screaming face suddenly appears on the screen. The ad harkens back to old YouTube prank videos, a trend in the site's early days in which trolls would upload to lure viewers closer to the screen and then suddenly shock them with a loud noise and frightening image. If you want, you can watch the banned The Nun ad for yourself below:

The policy that YouTube cited in its decision to ban the ad lists "promotions that are likely to shock or scare" as one of the examples of a type of ad that would be considered too shocking or violent to run on the streaming video site. Clearly, this The Nun ad definitely fits into that category. What made the ad worse is that, at only 6 seconds long, it was unskippable for YouTube users, meaning that there was no possible way to not watch the ad if you wanted to get to your video.

Thankfully, YouTube users can stream away on the site now with fear of that nun popping up again... unless, you know, you actually choose to watch the ad on YouTube as a video rather than a promotion. And for those who love a good scare, The Nun will scream its way into movie theaters on Sept. 7.