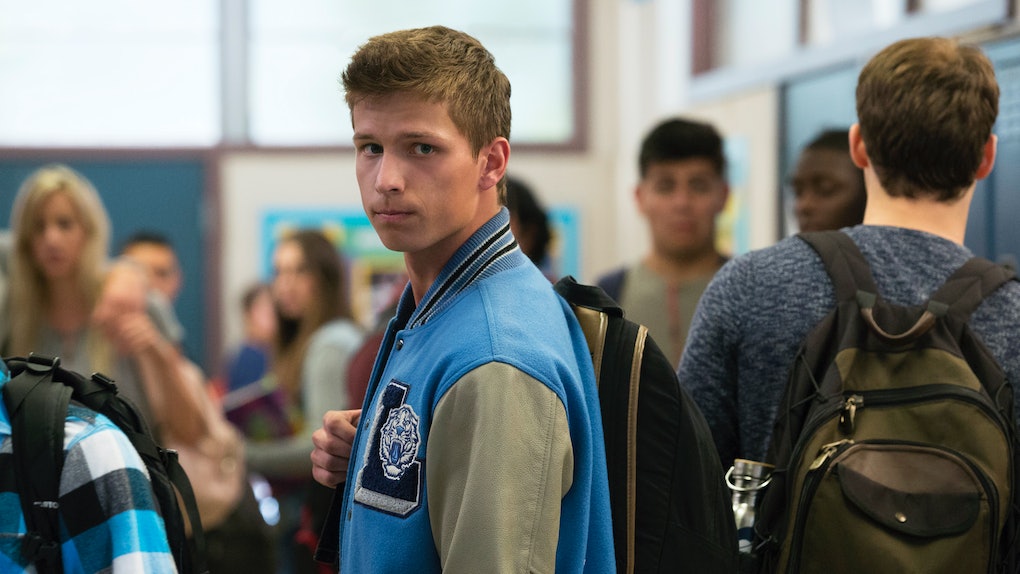 Season 2 of 13 Reasons Why definitely achieved a lot as far as bringing Hannah Baker's story to a full close. However, with the majority of Season 1's characters receiving deeper backstories and new characters playing considerable parts in the overall story, some plot inklings that initially seemed like major teases for something bigger just...disappeared. After miming the shooting of a gun in the Season 2 trailer, new athlete Scott Reed actually turned out to be a bit of a forgettable character. As a result, fans of the show have concocted this 13 Reasons Why theory about Scott Reed that, if panned out, would have put Scott in an entirely different light.

The early half of Season 2 hinted that there was something sinister about Scott, playing up a long look between Clay and Scott and the fact that Clay seemed to know very little about him outside of his athlete connections. However, as the season progressed, any bad feelings about Scott diminished when he helped Clay and his friends confront Monty about the threatening messages he was sending to those testifying in the Bakers' case.

Like with watching Zach's gradual disillusionment with the life of a Liberty High athlete, it was satisfying to see Scott seemingly turn the page in the baseball team's attitude toward kids falling lower in the high school hierarchy. But was Scott's brief screen time really just a means to track down Monty at the season's climax?

Unsatisfied 13 Reasons Why fans have taken to Reddit to debate about how the use of Scott could have been better, and one viewer arrived at a particularly interesting theory. Although the reveal of Hannah's summer fling with Zach is many fans' favorite Season 2 moment, why wasn't Scott the secret boyfriend? Reddit user eRkUO2 writes:

Many issues have been raised about the writers needing to display Hannah having a positive relationship with a boy. Choosing Zach to fit this role created continuity errors with season one. Why not choose Scott to fit this role? The show already hinted at him being a decent guy, similar to Zach in S1, but did NOTHING with this character otherwise. He already seems like someone who feels sorry and is secretive in nature so that role would fit well for him. It would also solve the issue of the Polaroid messages left feeling like something Zach wouldn't do.

Scott instead of Zach in that sweet summer lovin' montage? I'm kind of into it.

The forum response to the suggestion is mixed, with some viewers insisting that Season 1 hinted at Zach's affection for Hannah despite how he treated her. Zach, already a major character before Season 2 launched, also wouldn't have had much to do in new episodes if he wasn't Hannah's ex. However, perhaps the relationship twist would be even more groundbreaking if Hannah had dated someone not included in Season 1's inner circle. User Ohbrothergollygee says:

That is exactly what I thought was going to happen when the role and casting [of Scott] was first leaked. He could have been the new guy working at the theatre while Clay was away in the summer, they could have had a fling, maybe he was supposed to go back home afterward, but for whatever reason ends up back at Liberty for Spring term right when the trial starts... he could have been a "surprise" witness by the school. So much potential, lost.

For some fans, any continuity flaws within Zach and Hannah's relationship traces back to Season 2 not using Jay Asher's original novel for story inspiration. Reddit user kjdbthrowaway writes:

[T]he show shouldn’t have gone beyond a season 1, in my eyes. It told the story of Hannah straight from the book (for the most part) and it should’ve ended there. Now that they made a season 2, they have a lot of continuity errors. Whenever shows/movies shy away from the source material and try to write original content it almost always goes awry.

Of course, the fact that we knew nothing about Scott Reed beforehand probably would have made a relationship with Hannah seem even more bizarre, but at least it would've brought the story briefly outside of Liberty High's clearly defined "Hannah Baker & Associates" bubble. We were left hanging for any more info about Scott, but actor Brandon Butler is just as confused about his character's intentions in Season 2, telling Seventeen:

I had a discussion early on with [showrunner] Brian Yorkey and he told me that Scott actually wasn't a bad guy like Bryce, so I at least was conscious of that while filming. Other than that though I wasn't fully sure who or what Scott was about. I was learning who he was as we got the scripts over the course of filming. I’m glad that Scott did the right thing in the end... I have no idea if there will be a season 3 or if Scott will even be back (I hope so though). But if there is, selfishly, I think it would be kinda interesting to see Scott hanging out with Clay’s crew and maybe learn more about Scott’s relationships with Bryce and Monty. Scott’s still a mystery to me.

We'll have to wait and see if Scott returns for a bigger role in a possible Season 3 of 13 Reasons Why. Until then, I'm picturing Hannah's hypothetical summer romance with Scott.

More like this
This 'Stranger Things 4' Theory About Eleven's Past Is Super Dark
By Ani Bundel
Ellen Pompeo's Response To Jesse Williams Leaving 'Grey's Anatomy' Is Emotional
By Cianna Garrison
'The Woman In The Window': 12 Differences Between Netflix's Movie & The Book
By Abby Monteil
Stay up to date