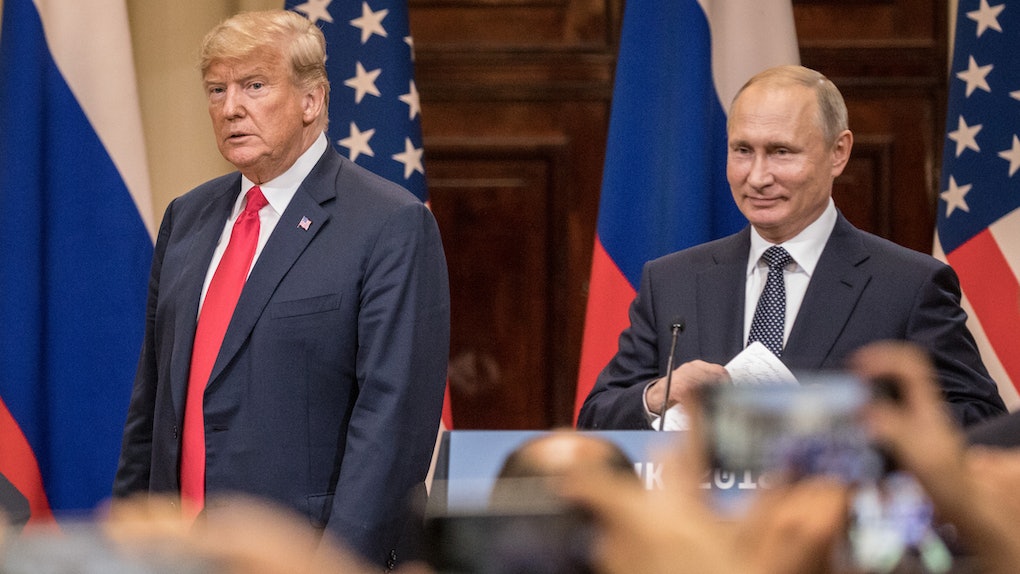 So, it happened: President Donald Trump and Russian leader Vladimir Putin had their first known conversation after the release of the Mueller report. Though Special Counsel Robert Mueller's investigation found that there was no collusion between Russia and members of the 2016 Trump campaign, it did find find evidence that Russia interfered in the 2016 presidential election, which is something you'd think would come up in their conversation. Well, it didn't. And these tweets about Trump's phone call with Putin about the Mueller report are not happy about it.

Trump told reporters in the Oval Office on May 3 that he and Putin had a "good conversation about many things," from trade to North Korea's nuclear program, per The Associated Press. While the Mueller report did apparently come up in their chat, Trump told the press that he and Putin "didn't discuss" Russian election interference, per The Hill. White House Press Secretary Sarah Sanders said as the time that the president had previously made it clear to Putin not to meddle in future elections, per The AP. Trump instead suggested that they joked around about the outcome of the probe, with Putin reportedly saying "something to the effect that it started off being a mountain and ended up being a mouse." Kinda wild considering Mueller did outline Russia's extensive efforts to meddle in the presidential election (but more on this in a sec).

Trump later repeated on Twitter that afternoon that he and Putin had discussed the Mueller probe, but again dismissed it as a "witch hunt" and a "hoax." Trump went on to praise the conversation he had with Putin in a tweet on May 4, adding that he feels there is "tremendous potential for a good/great relationship with Russia."

The prospect of that relationship without nipping the election hacking in the bud, though? Yeah, Twitter is having a hard time with that one.

Here's a look at his tweets first:

Social media users are seriously not having that.

"Why is Trump having friendly little conversations with Putin," @DebErupts wondered.

Rep. Adam Schiff (D-California) tweeted that Trump "betrays our national security" for "nothing more than his own vanity and delusion."

"This should frighten every American," another Twitter user who goes by the name Curtis Clark wrote.

Some are also pointing out what they say is increasingly alarming behavior by Trump, including his casual response to the North Korean projectile launch on May 4. Trump expressed his hope for a deal with Kim Jong-un following North Korea's short-range missile launch. Sanders said the White House was aware of the launch and will "monitor as necessary."

A lot of people just can't figure out why Trump wouldn't talk to Putin about election hacking after the Mueller report. In the report, which was released on April 18, Mueller wrote that Russia's interference in the election was “sweeping and systematic," per the AP. It added that "the Russian government perceived it would benefit from a Trump presidency and worked to secure that outcome, and that the Campaign expected it would benefit electorally from information stolen and released through Russian efforts." Elite Daily previously reached out to the White House for comment on the details in the report, but did not immediately hear back.

Trump seems to be more focused on the fact that the report found no collusion, though, as he's tweeted things like "no collusion" and "no obstruction" in the wake of its release.

For what it's worth regarding the content of Putin and Trump's phone call, White House Press Secretary Sarah Sanders said on May 3 that Trump didn't have to confront Putin about Russian election interference because he apparently has already made it clear that that's unacceptable. "He doesn’t need to do that every two seconds," she said, according to the AP.

Well, then. Sounds like President Trump's approach to dealing with Putin in the wake of the Mueller report's findings is a take-it-or-leave-it kind of situation, so I guess we'll just have to deal with these comments (or lack thereof).