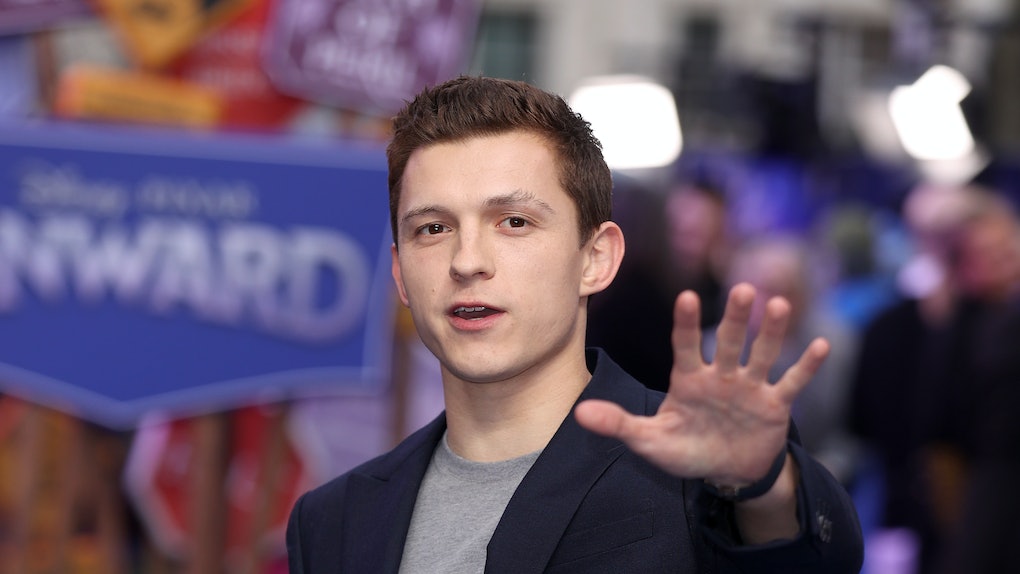 You know that feeling when you have to log onto Zoom for a meeting and you just don't want to get dressed for the work day ahead? Well, A-list actors feel the same way, but instead of dressing down for Zoom meetings, they do it on live television. The tweets about Tom Holland's pantsless Tonight Show interview were incredibly thirsty given the small flashes of the Spiderman star's legs, but the internet was still ablaze with screenshots of the brief glimpse.

Holland's Feb. 23 interview with Jimmy Fallon started off business as usual, but the 24-year-old had a trick up his sleeve to show the camera. Flexing his quads, he revealed to Fallon that he was in his underwear for the virtual chat, opting to only dress up on top. He wore socks, too, but it was the shot of the superhero actor's muscular legs that got Marvel fans on Twitter talking.

"I don’t have to shave my legs because I’m a prepubescent teenager,” Holland joked before showing off to the worldwide audience of viewers. Some stans brushed off the moment and merely noted their jealousy of his hairless legs, or just made memes about his appearance on the show, but others got downright thirsty for the heartthrob.

Scroll through the full roster of tweets crushing over Holland's legs below, and just try not to fall in love, too.

Fans Were In Shock At First

And A Couple Fans Were Just Jealous

Some people really just wanted the opportunity to express their envy over Holland's worked-out physique, and his ability to refrain from shaving his thighs and calves.

But The Tweets Got Progressively Thirstier

Of course, the thirsty tweets were quick to roll in once fans started seeing the pantsless star all over their timeline the morning after the interview aired.

There was also an unruly amount of stans who were almost too thirsty for Holland's legs, but we're not judging — and certainly, nobody is complaining about the leg show.

More like this
These Tweets About Jimmy Fallon's TikTok Dance Follow-Up Segment All Say It's Too Little, Too Late
By Brandy Robidoux
These Tweets About Regé-Jean Page Leaving 'Bridgerton' Are Royal Bummers
By Cianna Garrison
These Tweets About Taylor Swift's "Mr. Perfectly Fine" All Ask 1 Important Question
By Sydney N. Sweeney
Stay up to date