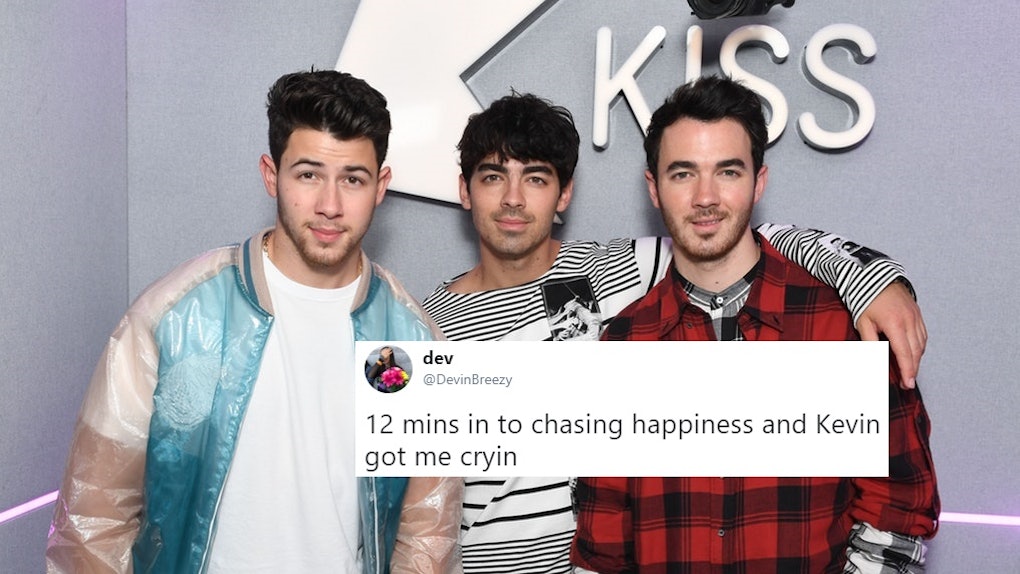 The Jonas Brothers are back in full swing with a new album called Happiness Begins. And to top off the monumental achievement of reuniting, releasing a couple of hit songs, and dropping an entire album, the brothers released a new documentary called Chasing Happiness that hit Amazon on June 4. And fans are already going wild over it. All the tweets about the Jonas Brothers’ Chasing Happiness documentary will definitely make you want to watch it the first chance you get.

Chasing Happiness chronicles the brothers’ journey from the beginning of their careers as Disney channel stars to the present. One thing the documentary covers in detail is their disbandment and how they eventually came back together.

At the beginning of the documentary, Nick Jonas reflects on this, saying, “I often wonder how it happened. All of it, us. You know how many people in similar situations to what we all went through together can’t even stand to be in the same room. I mean, we were not supposed to get out of Jersey.”

Later, Nick talks about how he and his brothers used to love doing everything together.

“From the beginning, my brothers and I were always really close,” Nick says, according to People. “We did love doing everything together — wrestling, backyard sports, every vacation. Most of the time, we would just run around the neighborhood.”

So, there really is a lot that goes down in this documentary. The official trailer for the documentary gives some great insight into how all this came to be. You can watch it down below:

One thing that doesn’t quite come across in the trailer is that the brothers discuss religion quite a lot and how that affected their growth as artists. They even talked about the purity rings they were so famous for.

“In the church, it was encouraged that we go through this program to wait for the right person or until marriage,” Joe Jonas explains in the documentary. “All the kids I grew up with were doing it so I was like, ‘This is cool.’ Probably by like 15, I was like, ‘What?’ That was not who we were, it was just something that we did when we were young kids. But we wore the rings through the first part of the band starting to explode and at that point, it was already too late because it was in the media.”

Needless to say, fans of the Jonas Brothers are overwhelmed with new content and they’re sharing all their thoughts on social media. They're especially head over heels for Kevin Jonas because he just doesn't get enough love — and he honestly came out looking like the unsung hero of the JoBros. In any case, here’s what they’re saying right now:

I don’t know about you, but it looks to me like this documentary is a hit all on its own. Fans have been waiting forever for the Jonas Brothers to deliver something really good and Chasing Happiness might just be it.

More like this
These Tweets About BTS' 'Bang Bang Con 2021' Sum Up The Epic Performance
By Cianna Garrison
Who Plays Jamie In 'Cruel Summer'? You've Seen Froy Gutierrez Before
By Rachel Varina
The 'Glee' Cast's Tribute To Naya Rivera At The 2021 GLAAD Media Awards Was So Moving
By Abby Monteil
Stay up to date