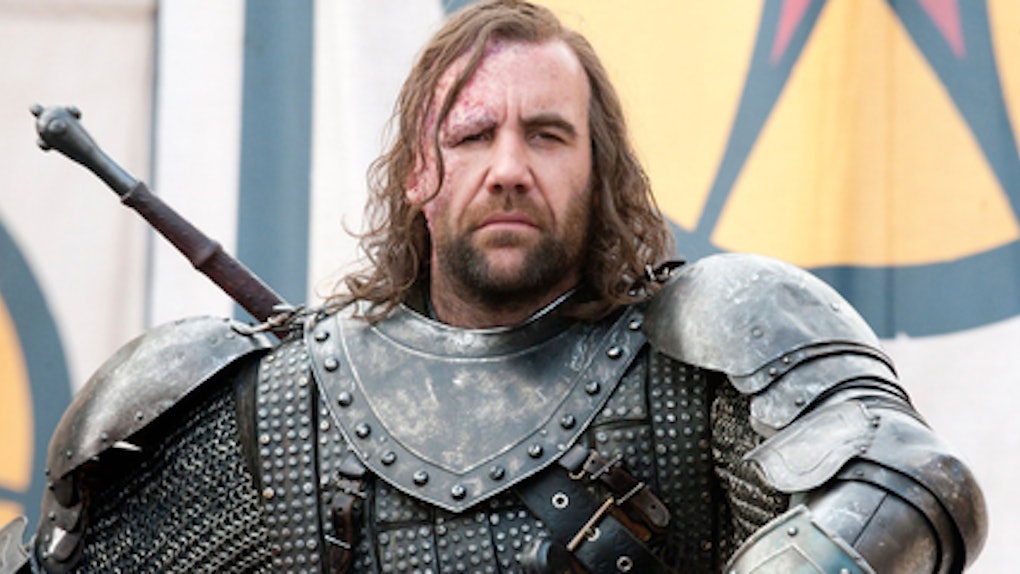 It's no secret that Sandor Clegane — who's better known as the Hound — has a complicated relationship with his brother, Gregor "The Mountain" Clegane. After facing down the Night King and his army of undead soldiers in Season 8, Episode 4, the Hound appeared to be ready to fulfill his promise that his older brother would be meeting his death at his hands. After seasons of build up, the long-awaited "Cleganebowl" finally went to a head as the brothers dueled in the Sunday, May 12, episode — and the Mountain emerged the victor after a particularly brutal fight. Unsurprisingly, these tweets about the Hound's death mourn the loss of the enigmatic character.

Throners might remember the telling moment during the finale of Season 7 when the Hound appeared to hint at a future between him and his older brother, who gave him his scars as a young boy. When the two brothers came face to face in the dragon pit, the Hound told him, "What did they do to you? Doesn't matter, it's not how it ends for you, brother. You know who's coming for you. You've always known."

While he didn't go into detail about who was coming for Queen Cersei's right hand, fans guessed that the Hound was referring to himself — and he proved them right when he headed to King's Landing alone with Arya Stark after telling Sansa, "There’s only one thing that would make me happy," i.e. killing his older brother.

Arya and the Hound made it into King's Landing unseen, and the Hound faced off against his brother. After an epic battle, the Hound met his end in the same way as Oberyn Martell, the Dornish prince who died back in Season 4 while fighting the Mountain as a champion for Tyrion Lannister's innocence in the murder of Joffrey. In case you forgot, Oberyn died a particularly gruesome death — when it seemed like he had emerged the victor, the Mountain tripped the prince and pushed his eyes into his head.

The same scene played out during the May 12 episode, with the Mountain gauging his younger brother's eyes out. Only, that wasn't all that happened. On the verge of having his eyes and face crushed, the Hound heroically sliced through his brother's eyes with a knife, and the two went tumbling through the crumbling rock together, both falling to their deaths in the flames below.

It was an unexpected and grisly end for the Hound, who had come to be a beloved fan-favorite character after taking Arya under his wing. In Episode 4 of the final season, he memorably saved the youngest Stark daughter from an army of White Walkers and Wights, allowing her to kill the Night King and save the living at Winterfell (and in all of Westeros).

Fans took to Twitter to share their feelings about the Hound's last stand, and they were understandably devastated while applauding his bravery.

While the Hound ultimately didn't survive, he died trying to do what he had always wanted to do, and was able to take down the Mountain with him in the process. Unfortunately, with just one episode of Game of Thrones remaining (the series will conclude on Sunday, May 19), it's likely that fans will see many more of their favorites fall before the season finale. The Hound was a particularly sad one to stomach, but now fans are fearful of who will be next.