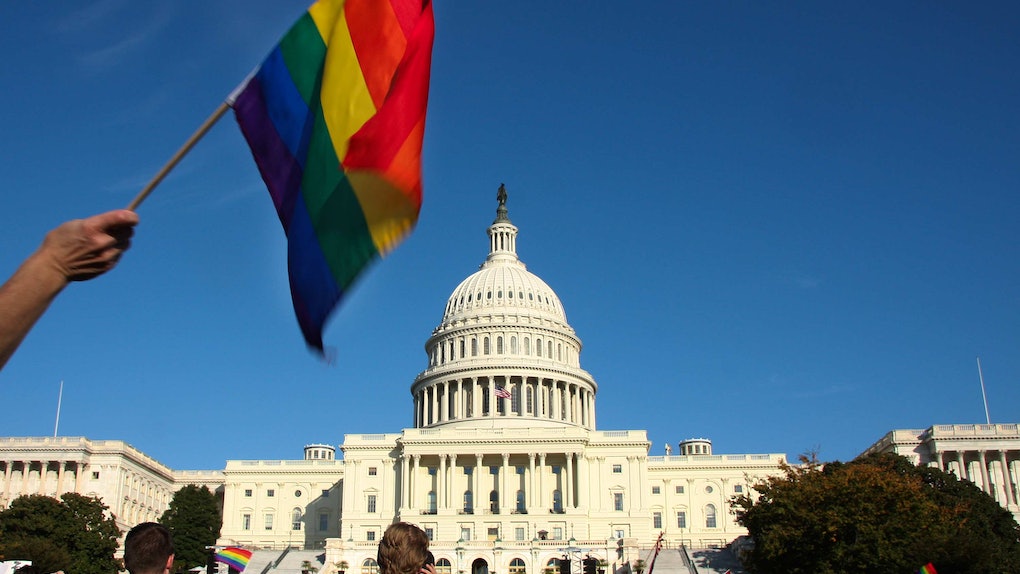 These Tweets About The Equality Act Cheer This Huge Moment

Add a check to the "wins" column: On Thursday, Feb. 25, the U.S House of Representatives voted to pass the Equality Act, the LGBTQ+ rights legislation that would ban discrimination based on sexual orientation or gender identity. While the bill still has to proceed through the Senate to become law, the vote is a first step towards a huge win for LGBTQ+ Americans. Across social media, people are already cheering this bill's progress.

The Equality Act, which was previously introduced in 2019, would amend the Civil Rights Act of 1964 to ban discrimination based on gender identity and sexual orientation. The bill would cover discrimination in employment in housing, employment, and public businesses like restaurants, stores, and services. While it passed the House in 2019, it was not brought for a vote in the Republican-controlled Senate at the time. Now, reintroduced in a Democrat-controlled Congress, the bill has passed the house in a 224-206 vote, per CNN, with at least three Republicans crossing party lines to vote in its favor.

Notably, this version of the bill follows the Supreme Court's June 2020 decision in Bostock v. Clayton, in which the Court ruled that a gay man fired from his job had been discriminated against — asserting that sexual orientation and gender identity were covered under sex discrimination. Now, the Equality Act would codify that ruling and its precedent into law, while expanding its applicability.

Across social media, people celebrated the vote and expressed their hopes for the future.

Now, the bill goes to the Senate, where it already has strong supporters among the Democratic Party, and Senate Majority Leader Chuck Schumer has promised to bring it to a vote. However, its ultimate fate is unclear, as it will have to pass the 60-vote threshold to avoid a filibuster. Conservative opponents have suggested that it would violate religious liberty by requiring businesses and institutions to provide services to LGBTQ+ people — the Equality Act would explicitly supersede 1993's Religious Freedom Restoration Act (RFRA), which prohibits the government from "substantially" burdening the free exercise of religion. In short, religious beliefs couldn't be used to justify discrimination against LGBTQ+ people.

Still, the bill has a far better chance in 2021 with a Democrat-controlled Senate than under a Republican-controlled Senate back in 2019. With any luck, Twitter will get to celebrate this legislation again soon.

More like this
These Tweets & Memes About Matt Gaetz's Venmo All Make The Same Joke
By Cianna Garrison
Joe Biden's Quotes About Kamala Harris Are Full Of Respect
By Rhyma Castillo
The More Contagious B-117 COVID Variant Is Now The Most Common Strain In The U.S.
By Rhyma Castillo
Stay up to date