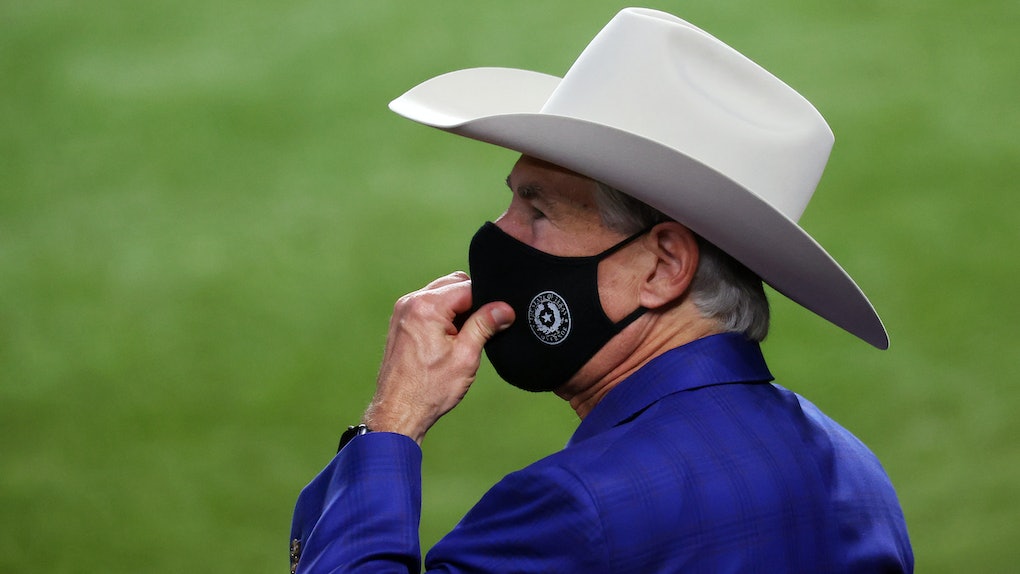 These Tweets About Texas Reopening All Say The Same Thing

After struggling through a state-wide humanitarian crisis in the wake of a devastating winter storm, Texas is in the spotlight once again. On March 2, Governor Greg Abbott announced an executive order to end the state-wide mask mandate, despite continued warnings from public health officials to continue following safety measures amid the ongoing COVID-19 pandemic. These tweets about Texas reopening all roast Abbott for allowing the state to operate at 100% capacity, and as a Texan myself, I'm 100% here for it.

As of March 10, masks will no longer be required in public spaces, and businesses of any kind will be allowed to operate at 100% capacity — including bars, concert halls, dance clubs, sporting arenas, and more. Abbot announced the policy change in a March 2 public address. "For nearly a half a year, most businesses have been opened either 75% or 50%," Abbott said. "This must end. It is now time to open Texas 100%," he added, later noting that "people and businesses don’t need the state telling them how to operate." In a announcement via Twitter also on March 2, Abbot wrote that "with this executive order, we are ensuring that all businesses and families in Texas have the freedom to determine their own destiny."

In the announcement, Abbott credited advancements like the limited availability of COVID vaccines for the decision to lift the mask mandate and reopen. "Texas now has the tools to protect Texans from the virus," he said, noting that by next Wednesday the state is expected to have administered 7 million vaccine shots, which likely means 3.5 million people fully vaccinated, as most vaccine options involve two shots. Texas has a population of 29 million. As of March 3, over 516,000 Americans have died from the coronavirus, according to The New York Times. Although cases across the country are, on average, decreasing, Texas itself has seen a 5% increase in cases over the last two weeks, per statistics from Johns Hopkins University. On March 1, Houston, one of the largest metropolitan areas in the country, became the first city in the United States to record cases of every major COVID-19 variant.

Public health officials are critical of the move, and have warned Texans to continue to don their masks in public spaces. According to Dr. Mark Escott, Travis County Interim Health Authority, COVID-19 is still very much a threat. "Despite the impending removal of the state mask mandate, we must continue our vigilance with masking, distancing, and hand washing," he told The Texas Tribune on March 2. "These remain critical in our ongoing fight against COVID-19," he added.

Despite the executive order, Abbott has suggested that Texans should continue wearing masks, although the state government will not enforce a mandate. "[This announcement] is a reminder that each person has a role to play in their own personal safety and the safety of others," he said per the press release.

Twitter users weren't exactly surprised with the governor's announcement, and many tore into the decision as as short-sighted and harmful.

According to White House Chief Medical Advisor Dr. Anthony Fauci, COVID-19 vaccines likely won't be widely available to all American adults until late May or early June. Until then, experts say, the best defense against the virus is still following COVID-19 safety measures, like washing your hands, social distancing, and (properly) wearing two masks.

More like this
These Tweets & Memes About Matt Gaetz's Venmo All Make The Same Joke
By Cianna Garrison
These 40 Clever Vaccine Selfie Instagram Captions Deserve A Shot On Your Feed
By Rachel Chapman
The More Contagious B-117 COVID Variant Is Now The Most Common Strain In The U.S.
By Rhyma Castillo
Stay up to date