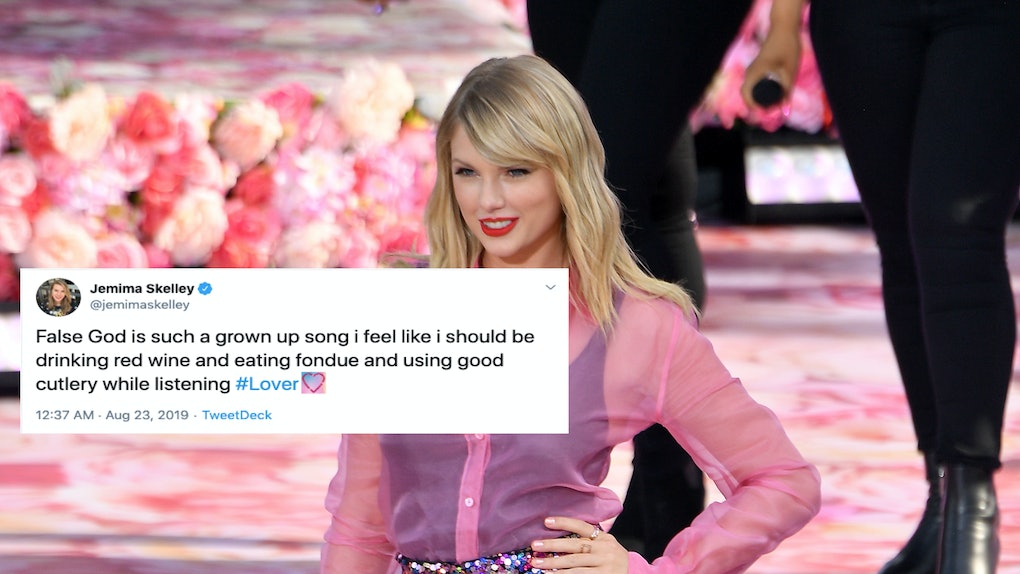 Taylor Swift's new album Lover is filled with open and honest tracks on just about everything. Like, Swift really opens up about a plethora of topics. She took time to reflect on her own shortcomings in "The Archer." She penned a love letter to her British boo Joe Alwyn with the romantic track "Lover." She called out sexism and the double standard between men and women in "The Man." And now she's got everyone shook with "False God." Tweets about Taylor Swift's "False God" hint that fans can't get enough of the sexy song and its sultry beat.

Prior to the album's release, many fans wondered what the track "False God" could cover. One super fan, who I'm assuming had the golden opportunity to attend Swift's super-secret Nashville listening party, created an intense Reddit thread to dish on what they knew about the album and each track. In the thread called "It’s a cruel summer — so here’s every possible detail about Lover," another Redditor claimed the track would be political and possibly about the controversial leader of the free world, Donald Trump. OK, so the fan was wrong about this particular track, but to be honest, they probably don't mind that "False God" instead focuses on the sexy side of a relationship.

Fans have taken to Twitter with their reactions to the yearning song and, no surprise, it's definitely left an impact.

From feeling the "False God" mood to being shook that Swift embraced a more adult tone, fans had a range of emotions listening to the song. Opening with a saxophone solo, "False God" describes a bumpy patch in a relationship before the couple gives in to their more primal urges. On the track, Swift softly sings, "They say the road gets hard and you get lost / When you're led by blind faith, blind faith / But we might just get away with it / Religion's in your lips / Even if it's a false god / We'd still worship."

Listeners were also caught off guard by "False God" including the saxophone, and honestly, same. Swift's transition from the country music genre to pop might have taken time to adjust to, but her use of such an explicitly sexy instrument is a move I can definitely endorse. Folks on Twitter agree.

Following her squeaky-clean lyrics at the start of her career, Swift's albums began incorporating sexier songs in recent years. On Twitter, Swifties have already compared "False God" to similar, earlier jams such as "Dress," "Don't Blame Me," and "So It Goes."

On Instagram, Swift called Lover "a celebration of love, in all its complexity, coziness, and chaos." Sex often plays a role in love, so it's only right for Swift to embrace that saxophone beat and explore her... jazzier side. While "False God" might not be everyone's cup of tea, its fans have definitely made it loud and clear that they're down for worshiping alongside Swift.