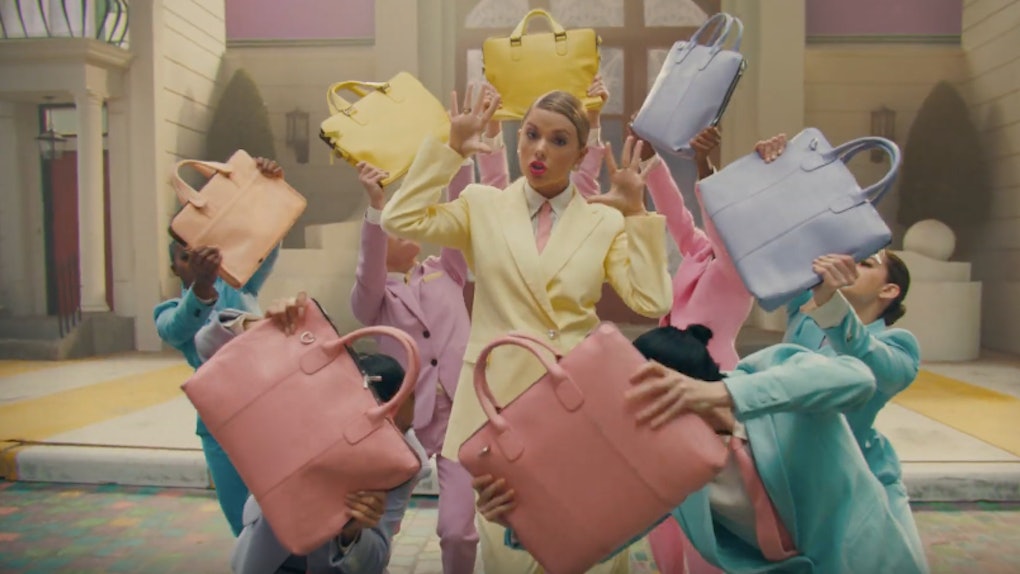 These Tweets About Taylor Swift & Brendon Urie's "ME!" Music Video Are A Full Mood

If you’ve been keeping up with news about Taylor Swift, then you know by now that she released a new single on April 26. The single is called “ME!” and is probably one of Swift’s best songs yet. Don’t believe me? Then you’ll just have to consult all the Swifties out there who are tweeting about the song and its music video nonstop. All the tweets about Taylor Swift’s “ME!” music video will make you want to watch it yourself.

"ME!" is a song about self-love and embracing your individuality. In the video, Swift and Urie dance around a pastel fantasy world, and just hours before its release at midnight, Swift chatted with Robin Roberts on April 25 to discuss the meaning behind the song. She said that “ME!” is all about self love and empowerment.

“‘ME!’ is a song about embracing your individuality and celebrating it and really owning it. I think that with a pop song, we have the ability to get a melody stuck in people’s heads and I just want it to be one that makes them feel better about themselves, not worse,” Swift explained.

Needless to say, the “ME!” music video is probably one of the most highly anticipated music videos of the year so far. Swift has been teasing new music for the past couple of weeks and sharing very mysterious photos on social media as part of the promotion for “ME!” So, fans have been waiting for quite a while to finally hear and see this video. And since Swift is one of the most famous musical acts on the planet, that basically translates into a massive cultural event that’s unfolding on social media as we speak.

But before I get to all the tweets fans are firing off about the music video, let’s talk about the video itself. The video is all kinds of fun and shows Swift at her very best. Swift and her team clearly put a huge amount of effort into this video and if the fan response is any indication, then I’d say it’s really paid off. Here’s a look at the video itself:

The Swifties are obviously thrilled with this new music video and they should be. Swift really delivered the goods for them, proving that she has a solid handle on what her fans truly want. Of course, Swifties are super important to Swift and I’m sure she’s loving all their reactions to “ME!” But Swift has loads of celebrity fans, too! Take Shawn Mendes, for example, who recently honored Swift with a blurb in TIME.

“I’ve been a Taylor Swift fan for as long as I can remember. But it wasn’t until I met and got to know her that I understood how wonderful a person she truly is,” Mendes wrote. “Taylor makes the job of creating music for millions of people look easy. It all comes from her — her belief in magic and love, and her ability to be as honest and raw as possible. She’s the master of putting the perfect amount of thought into not overthinking, and that’s why her music connects so well.”

Being the huge fan that he obviously is, I’m sure Mendes is loving Swift’s new single and video the way Swifties are.

More like this
What Does Taylor Swift's Vault Door Video Mean? Fans Are Decoding It
By Cianna Garrison
These Tweets About Taylor Swift's "Mr. Perfectly Fine" All Ask 1 Important Question
By Sydney N. Sweeney
21 Taylor Swift's 'Fearless' Lyrics For Throwback Pics That Belong On The 'Gram
By Rachel Chapman
Stay up to date