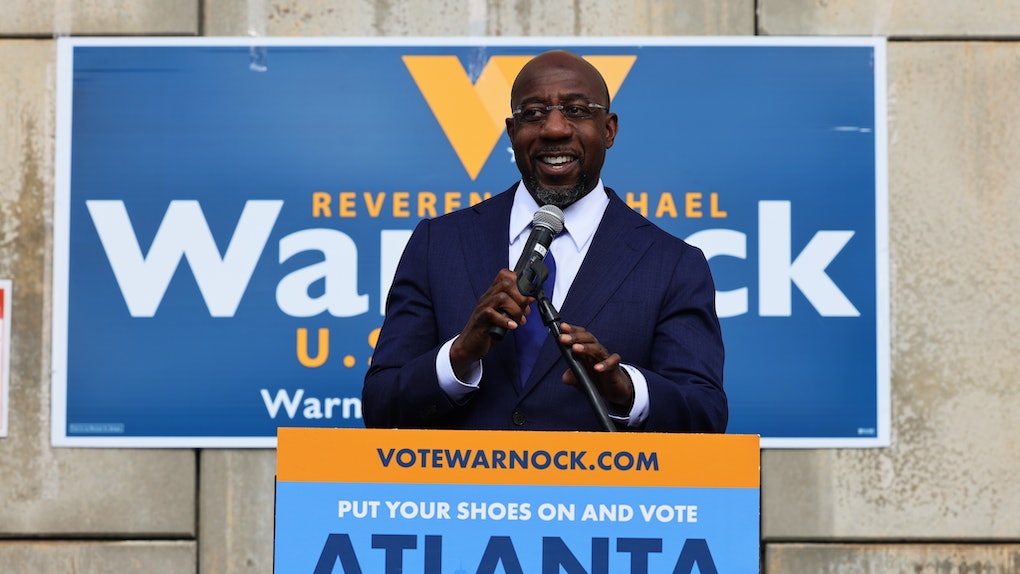 These Tweets About Rev. Raphael Warnock's Victory Speech Are An Emotional Rollercoaster

Early in the morning on Wednesday, Jan. 6, multiple news outlets finally gave people an outcome for one of the Georgia Senate runoff races, and it's a history-making win. According to The New York Times, Democrat Rev. Raphael Warnock is the projected winner of his Georgia Senate race against the GOP incumbent, Kelly Loeffler. CNN and The Associated Press also called the race for Warnock around 2 a.m. ET, making him the first Black senator from the state of Georgia. Prior to the official calls, Warnock addressed supporters, and these tweets about Rev. Raphael Warnock's victory speech show that people are in their feelings about the historic win.

Warnock got a jump on the official announcements and addressed his supporters in a live Zoom video call in the wee hours of Jan. 6. He didn't immediately declare victory, but, according to a transcript of the speech in the Savannah Morning News, the newly-elected senator from Georgia shared a positive outlook: "There are a lot of votes out there ... and we have a path to victory ... This is a game of inches [and] we’re going to win this election." At the time of his announcement, Warnock led Loeffler in the vote count by 0.8%, with Warnock receiving 50.4% of the vote to his opponent's 49.6%. As of 8:11 a.m. ET, after he was named the projected winner and with 98% of the estimated votes reported, Warnock's lead was pushed to 1.2% with the pastor securing 50.6% of the vote, according to The New York Times.

In his speech, Warnock first took a moment to realize how far he'd come with this win. The senior pastor of Ebenezer Baptist Church said, "I come before you tonight as a proud American, and as a son of Georgia. My roots are planted deeply in Georgia soil. A child who grew up in Kayton Homes housing projects, No. 11 out of 12 children, a proud graduate of Morehouse College, and the pastor of Ebenezer Baptist Church, the spiritual home of Martin Luther King, Jr. and Congressman John Lewis."

Warnock also mentioned his late father, a pastor and veteran, and went on to share how especially meaningful the moment was for his mom, saying, "The 82-year-old hands that used to pick somebody else’s cotton went to the polls and picked her youngest son to be a [U.S.] senator."

It was at that point, Twitter really got in their feels:

People also couldn't help but notice Warnock's message of healing: "And I promise you this tonight: I am going to the Senate to work for all of Georgia. No matter who you cast your vote for in this election, in this moment in American history, Washington has a choice to make. Will we continue to divide, distract, and dishonor one another? Or, will we love our neighbors as we love ourselves?"

To close, Warnock pushed for unity as he quoted Dr. King: "We are tied in a single garment of destiny. We are caught up in an inescapable network of mutuality. Whatever affects one directly, affects all indirectly." And finally, the senator-elect set his intention to "meet the challenges of this moment," saying, "Together we can do the necessary work and win the future for all our children."

At the time of publication at 8:10 a.m. ET, Loeffler has yet to concede. She addressed supporters in person earlier in the day, saying, "This is a game of inches. We're going to win this election, we're going to save this country, and I'm not going to stop working," per Yahoo News.

The other Senate runoff race between Republican incumbent David Perdue and Democratic challenger Jon Ossoff is too close to call as of publication, per The Times, with Ossoff leading the vote count by 0.38%. Should Ossoff become the projected winner, the Democrats will control the Senate with 50 seats and Vice-President elect Kamala Harris acting as the tiebreaker.