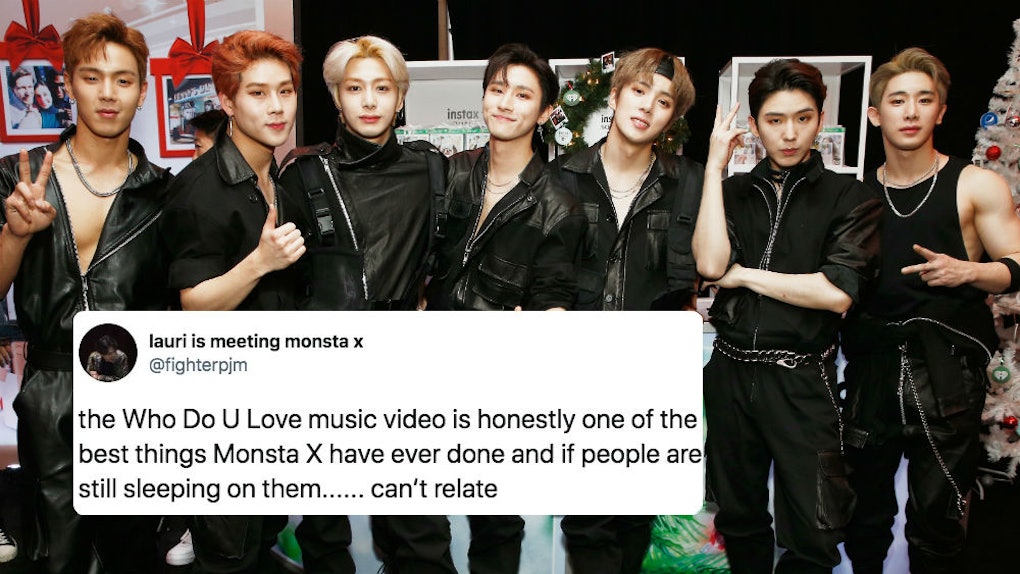 These Tweets About Monsta X's "Who Do U Love?" Video Answer Their Question

Monsta X has released total bangers like "Jealousy," "Shoot Out," and "Alligator," and now they can add "Who Do U Love" to the list, because their new single is absolute fire. Similar to their previous release for "Play It Cool," which was an English-language collaboration with Steve Aoki, "Who Do U Love" also has the group's members singing in English, which the group's fanbase, the Monbebe, will appreciate — especially international fans. English-language releases are pretty rare in K-Pop, so as an international fan, I'm savoring every second of this because I can finally sing along after just the first listen rather than uh, first 100. If anything, "Who Do U Love" is just another indication of how global the group is becoming, since both the song and music video feature a collaboration with French Montana. These tweets about Monsta X's "Who Do U Love?" music video show just how much Monbebes are loving it, which basically answers the group's question of "Who Do U Love?" (It's you, Monsta X. It's always been you.)

The group's fans would immediately notice that Monsta X's music video for "Who Do U Love?" is different than any of their previous music videos. For starters, the group opted for their video to be shown in widescreen, which was a super interesting stylistic choice on their part. Then, instead of the members all being together, the video showed Shownu, Wonho, Minhyuk, Kihyun, Hyungwon, Joohoney, and I.M. singing the lyrics separately. They also didn't break out in group choreography, and instead, the guys performed choreography all by themselves. This all could be because the song is about feeling lonely and desperately wanting to be with someone, but they might not want to be with you.

Let me tell you, the song is so addictive and it will be stuck in your head basically for the rest of forever. Shownu, Wonho, Minhyuk, Kihyun, Hyungwon, Joohoney, and I.M. slayed their performances in the music video for "Who Do U Love?" and really made me feel the emotions of the song.

OK, you don't need me to tell you how awesome the music video is, so I'll let Monbebes take it away.

Here's how fans reacted to Monsta X's "Who Do U Love" music video:

I think Monbebes love the video, don't you think? And the MV is just the first of many things coming their way. Monsta X is set to perform "Who Do U Love?" live on Good Morning America on Thursday, August 1. Stateside fans can also expect to hear the group perform their new single on their We Are Here world tour, which comes to the U.S. in July. I would say get your tickets now, because with "Who Do U Love?," I predict Monsta X will be winning over a lot of new fans.

More like this
These Tweets About Taylor Swift's "Mr. Perfectly Fine" All Ask 1 Important Question
By Sydney N. Sweeney
These Tweets About BTS' 'Bang Bang Con 2021' Sum Up The Epic Performance
By Cianna Garrison
These Tweets Comparing SuperM's "We Do" To BTS' "Dynamite" Video Are So Split
By Michele Mendez
Stay up to date