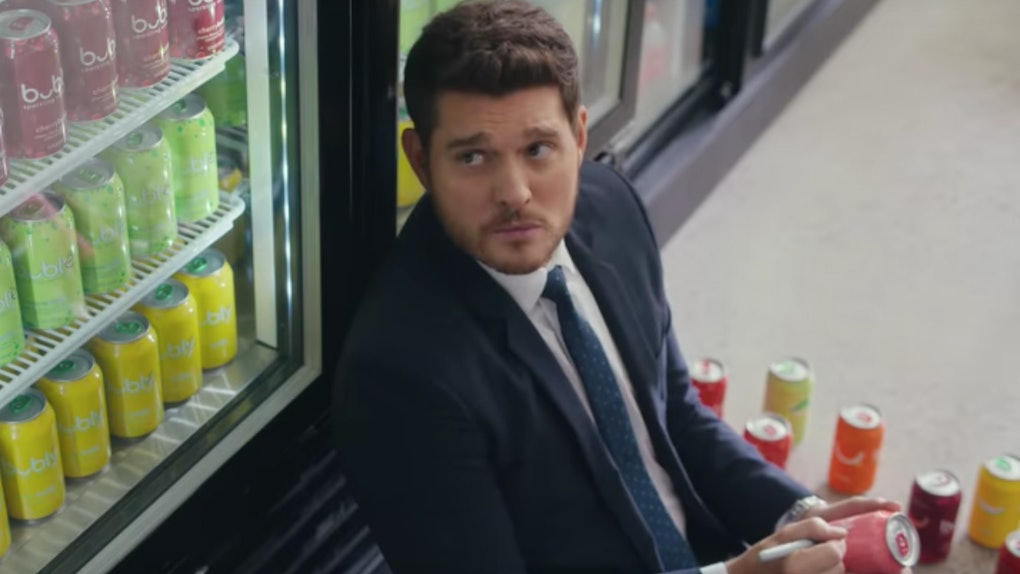 The majority of my favorite Super Bowl ads tend to include random celebrity cameos, and one of my favorites thus far has been the commercial for carbonated beverage brand, Bubly. It starred none other than the king of Christmas albums, which Bublé fans and Bubly drinkers were incredibly stoked about. So if you haven't already seen these tweets About Michael Bublé's 2019 Super Bowl commercial, they show that fans were absolutely thrilled about every second of it. I know I was.

If you haven't seen Bubly's 2019 Super Bowl ad yet, it starts out with famous singer Michael Bublé browsing the beverages in a convenience store. Famed comedian and actress, Aparna Nancherla, is standing in the middle of the aisle with a can of Bubly, and Bublé says, “Blackberry Bublé, my favorite.” Nancherla proceeds to correct him before they start to argue over the pronunciation. Eventually, a manager gets involved, joining the argument. He continues to try and sway Bublé, but no matter how hard he tried, he could not manage to understand the difference.

The ad ends with a little girl who comes up to the three of them holding a marker. She asks "Mr. Bubly” for an autograph (mixing up the names) before it cuts to Bublé using the marker to change the name on the cans from "Bubly" to Bublé." LOL It was really great, and if you haven't already seen it, make a point to check it out, below.

LOL honestly though, how cute was that? In my personal opinion, Bubly's commercial was funny, and super pleasant. Plus, it was beyond exciting to see Bublé thriving outside of the holiday season, if you know what I mean.

Anyway, as you probably would have imagined, Twitter was quite pleased about Bubly's sweet, light-hearted commercial. Make sure to check out their reactions, below — you definitely won't be disappointed.

OK guys real talk: I'm with the Twitterverse on this one. I don' t know about you, but Bubly's Super Bowl commercial has probably been the greatest one I've seen so far tonight.

On a totally opposite note, one cellphone carrier brand called Mint Mobile released one of the nastiest ads I've yet to see — focused on, I'm not joking, chunky milk. The ad starts with a man who can't believe there's a $20 phone plan, and says, "that's not right." The brand's mascot then insists that the only thing that isn't right is chunky milk. It then cuts to a fake ad that shows a mom talking about why she buys chunky milk, she pours it into a glass, and her kids drink it. Literally it's so gross, I could hardly stand to watch it in its entirety. You should probably just watch it for yourself anyway, but consider covering your eyes.

There are very few things that excite me more exciting than a good Super Bowl ad, and Bubly crushed totally theirs. While ads like Mint Mobile were totally disgusting, Bubly's was simultaneously feel-good and so freakin' funny. It looks like Bublé won Super Bowl Sunday, guys.