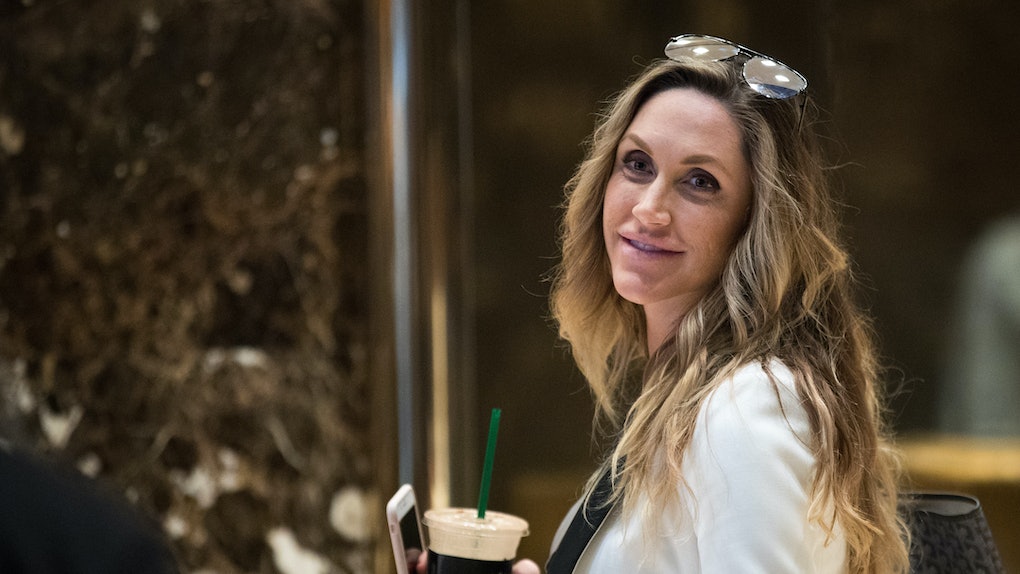 These Tweets About Lara Trump's Shutdown Comments Roast Her Obliviousness

If you needed a reminder that the President Donald Trump has a child-in-law who isn't Jared Kushner, can I remind you that Eric Trump's still married? On Wednesday, Jan. 23, Eric's wife Lara Trump, who also serves as President Trump's campaign adviser, decided to share her thoughts on the government shutdown and the nearly 800,000 government employees it has left without a paycheck. But Trump seems to think that the situation is just something to muscle through. "This is so much bigger than any one person," Trump said of the government closure on Jan. 23, and it didn't go over well. These tweets about Lara Trump's shutdown comment are saying she just doesn't get it.

It's been about a month since President Trump first failed to get his more than $5 billion in funding for his border security proposal — which includes a wall between the U.S. and Mexico — and hung the out of office sign on the government. As a result of the shutdown, 380,000 federal employees have been furloughed and another 420,000 have been working without compensation. During a Jan. 23 appearance on Bold TV, the interviewer asked Trump what she'd say to all the federal employees who are going without pay, and her answer... did not go over well.

"Listen this is, it's not fair to you and we all get that," Trump said in the interview. "But this is so much bigger than any one person." Trump went on to add, "It is a little bit of pain but it's going to be for the future of our country, and their children and their grandchildren and generations after them will thank them for their sacrifice. I know people have families, they have bills to pay, they have mortgages, they have rents that are due." Elite Daily reached out to the Trump Organization for further comment, but did not immediately hear back.

You can see the moment at about the 3:09 mark in the video below.

While Trump made a point to say that government employees being furloughed or working sans paycheck is a "bit" of a sacrifice for the bigger picture, that choice of language might be surprising to the people who are at risk of losing their homes or who have rationed lifesaving medicine that they can't afford to buy while not receiving a paycheck.

People on Twitter were quick to point out that Trump's comments were more than a little out of touch.

In the interview, Trump also said that the shutdown has been carrying on for "too long" and that her father-in-law is trying to fix it. She said on Wednesday,

The president is trying every single day to come up with a good solution here, and the reality is, it's been something that's gone on for too long and been unaddressed, our immigration problem. If we do nothing right now it's never going to get fixed.

The president has met with leading Democratic leaders on multiple occasions to negotiate an end to the shutdown and re-open the government to no avail. In their latest attempt to reach a compromise, Senate Minority Leader Chuck Schumer and Speaker of the House Nancy Pelosi met with President Trump in the situation room on Jan. 9, but the meeting reportedly ended in Trump storming out of the room when Pelosi said she would not provide any funding for the wall even if the government reopens. In the West Wing parking lot following their meeting, Schumer told reporters, "Again, we saw a temper tantrum because he couldn't get his way and he just walked out of the meeting." The following day, President Trump denied the claims of a tantrum in a tweet. Elite Daily reached out to the White House for comment on Schumer's claim, but did not hear back.

While negotiations appear to be in a standstill, there are nearly 800,000 employees who haven't seen a check in nearly a month. Whatever level of sacrifice it is, it's not good.

More like this
These Tweets & Memes About Matt Gaetz's Venmo All Make The Same Joke
By Cianna Garrison
These TikTok "Pass The Phone" Challenge Ideas Will Hilariously Roast Your BFFs
By Daffany Chan
The More Contagious B-117 COVID Variant Is Now The Most Common Strain In The U.S.
By Rhyma Castillo
Stay up to date