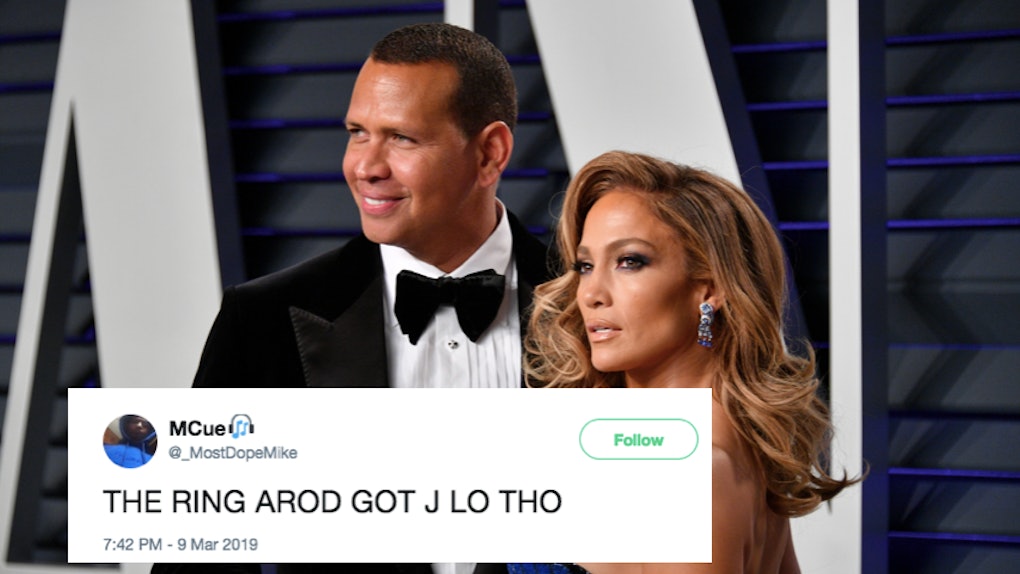 The internet is reacting after J-Rod announced that they are heading down the aisle in a set of matching Instagram posts on Saturday, March 9. Alex Rodriguez proposed to longtime love Jennifer Lopez with a massive ring reportedly worth $1 million, and these tweets about Jennifer Lopez and Alex Rodriguez's engagement are losing it over the stunning sparkler.

On Saturday night, the former New York Yankees star first took to Instagram to share the good news and show off the engagement ring he used to seal the deal. Rodriguez’s rep Ron Berkowitz confirmed to numerous outlets that the pair got engaged against the romantic backdrop of Bakers Bay in the Bahamas (which is reportedly also where Justin Bieber and Hailey Baldwin decided to become husband and wife), where they've been vacationing the last few days.

Rodriguez — who recently celebrated his and Lopez's two-year anniversary on Feb. 3 — headed to the social media app to share a photo of the emerald-cut rock. In the photo, the bling can be seen taking center stage on Lopez's hand, and all I can say is that it's literally blinding. Considering J. Lo's penchant for glitz and glamour, it was basically the perfect sparkler to use to pop the question to the "On The Floor" songstress, and people are losing it over just how big it is.

It looks like A-Rod did good when it came time to put a ring on it, and according to E! News, multiple jewelers told the publication that they estimated the emerald-cut sparkler to be worth at least $1 million.

Unsurprisingly, Rodriguez let the bling take front and center stage in his Instagram post, simply captioning the photo, "she said yes" with a black heart emoji. J.Lo followed suit by re-sharing the shot with a string of black heart emojis.

While their Instagram posts were relatively brief, Rodriguez took to his Instagram Story a few hours before the announcement to share a video of his fiancé walking in to a hotel room he'd completely decked out with red roses and rose petals spelling out the words "I love you." He also shared a quote reflecting on the meaning behind a soulmate, and his words will honestly melt your heart.

It's just one more example of all the sweet things this power couple has said about each other, and people are low-key freaking out that we'll be seeing J-Rod become official sooner rather than later.

I'm already getting so excited anticipating the details of what's bound to be an over-the-top ceremony and show-stopping wedding dress, but in the meantime, congratulations to this power couple!