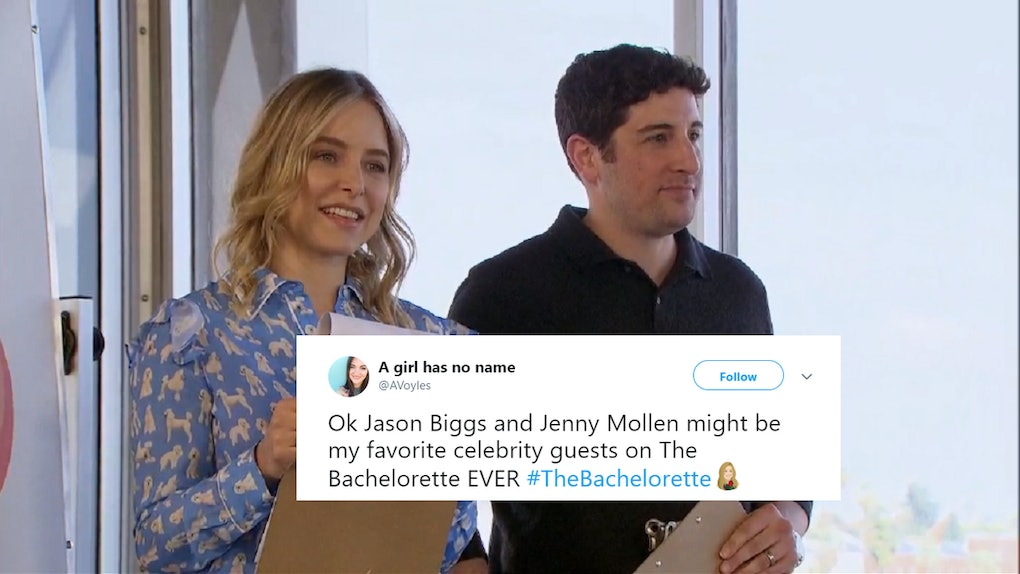 On Episode 3 of The Bachelorette, Hannah invited John Paul Jones, Cam, Tyler C., Mike, Kevin, Jed, Jonathan, and Matteo to a group date that turned out to be a trip back to health class. As a key factor of being the Bachelorette is deciphering a crop of men's fatherhood potential, Hannah found it necessary to give the guys female anatomy lessons and an insight into childbirth and a woman's true strength. "I need a man that's gonna be there with me through all the pain," Hannah told cameras. "And I mean all the pain."

Just as Kutcher and Kunis showed up for Rachel's Season 13 date focusing on childcare, Hannah had the celebrity guidance of Jason Biggs and Jenny Mollen, who have been married since 2008. Biggs, best known for his roles in the American Pie movies and Orange Is the New Black, joined Angel actress Mollen in leading a birthing class for the men. Props to ABC for giving millions of women the visual of men sporting pregnant bellies, feeding a baby, and experiencing a simulation of labor pains. Has John Paul Jones' reaction to the shock become a viral GIF yet?

Celebs usually tag along on Bachelorette group dates to provide comedic, slightly snarky commentary, essentially playing the role of live-tweeting fans in real time. Biggs and Mollen's opinions didn't disappoint, but if you thought sex ed in middle school was awkward, sitting through this date was almost as uncomfortable. I'll let some of Hannah's men's ignorance about the placenta slide, but Cam not knowing that pregnancy lasts nine months is unforgivable.

By the looks of Twitter, Bachelor Nation loved Biggs and Mollen's cameos. There's nothing like a guest appearance that doubles as a major throwback, right?

Fans were also dying over the men's hilarious lack of knowledge about babies and reproduction.

Biggs and Mollen are longtime fans of the Bachelor franchise, having previously voiced their displeasure with the Final Rose pick of Season 12's JoJo Fletcher at the time of her finale. Of course. JoJo is still engaged to Bachelorette fiancé Jordan Rodgers three years later, so their radar on contestants' intentions might be off, but Mollen and Biggs definitely helped Hannah single out some keepers. Singer-songwriter Jed proved his worthiness in both the written test and the labor simulation, while Tyler C. managed to look modelesque even during all that pain. Knowing how a man will keep his cool in a delivery room is a must, right?