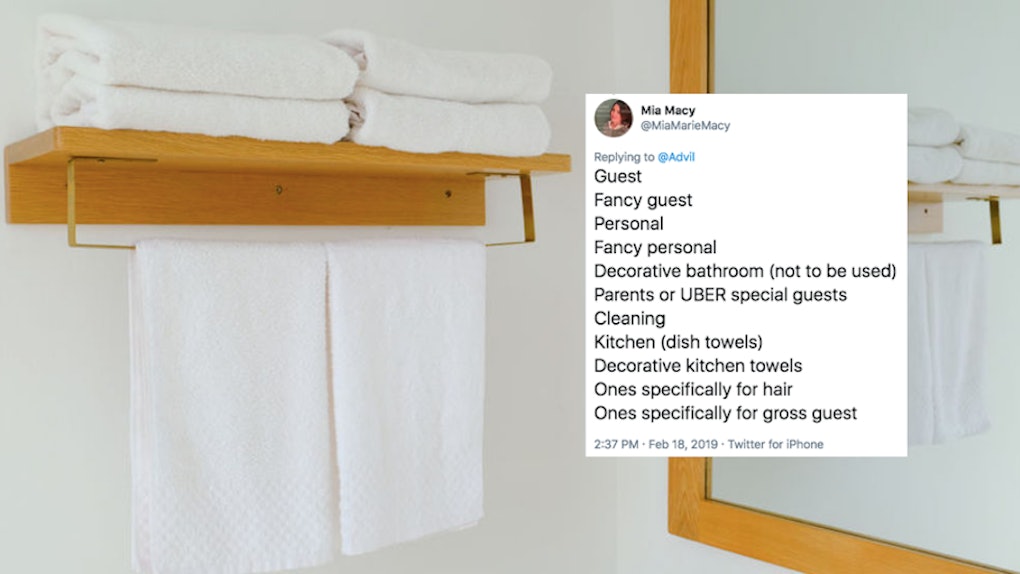 Have you ever wondered how many towels you and your partner should have? Well, even if you haven't, these tweets about how many towels couples should have prove that other people have been thinking about it a lot. Twitter has all but erupted over a debate about what constitutes as the perfect number of towels for a family to have. Like, I have two towels, my roommate has two towels, we have a couple of beach towels, about eight hand towels, and two bath mats. I didn't realize until just now that this might be the most scandalous thing about me. No, seriously, these people on Twitter take their opinions on the whole towel number debate very seriously.

So, how did all of this madness begin? Well, a guy who somehow managed to snag the username @Advil turned to Twitter for what I would have assumed was a pretty innocuous question. Little did he know, his innocent little question would turn out to be one of the most divisive scandals to hit the internet since the 2016 election. Just kidding, but, like, not really. It's a seriously puzzling question, people! Are two enough? Three? What if you have guests?

First, this guy came in strong with a count of exactly how many towels every couple should own at the very least.

I am just truly perplexed as to how or why any couple would need more than 10 bath towels for the two of them but, hey, to each their own!

This woman also has some strong opinions.

But, of course, they're completely different from the above guy's opinions because nobody can agree in this extremely intense debate.

And people aren't afraid to call people out for bad hygiene. Things are getting super heated.

Maybe he does a lot of laundry, Calvin! Sheesh.

OK, this guy is on another level.

I didn't want to have an opinion but, come on... a new towel every time?! That's just madness.

Things are getting so heated that people are only privately supporting their friends.

This debate is so intense that people are legit afraid to publicly get involved... in the debate over towels. Towels!!!

People are turning it into a larger class issue.

Shoot, is my minimal amount of towels a sign that my bank account is lower than "average"? Whatever shall I do?!

Having a son really mixes up the towel formula.

I agree with this lady. Don't go overkill on the towels! What ever happened to less is more?

This woman lives alone and may possibly be the most extra person alive. Mad respect.

All I have to say is: 50 washcloths. This woman has 50 washcloths because she's too good for sponges. Respect. Mad Respect.

This guy keeps it simple with two bath towels per person.

This guy understands that there's really only one objective answer here.

C'mon, Abdul! Just give your girlfriend what she wants!

Ah, how could we not take into account long hair?!

I will admit that I have longer hair and having just two towels does get a little bit difficult, especially on laundry days. I'd prefer four bath towels if I was really treating myself.

I'm just dying to know how you differentiate between a regular "guest" and a "fancy guest."

And dogs!! Dogs throw a whole other twist into the mix.

And, apparently, they're allowed to have up to six times as many towels as their people.

So that is why my towels haven't been absorbing as well. Mystery solved!

You can never have too many kitchen towels, as far as this lady is concerned.

I mean, I'm more of a paper towel person so I guess I'm sort of biased. But I guess I don't see any harm in having an infinite supply of kitchen towels.

Let's let towels be the one thing that should doesn't apply to.