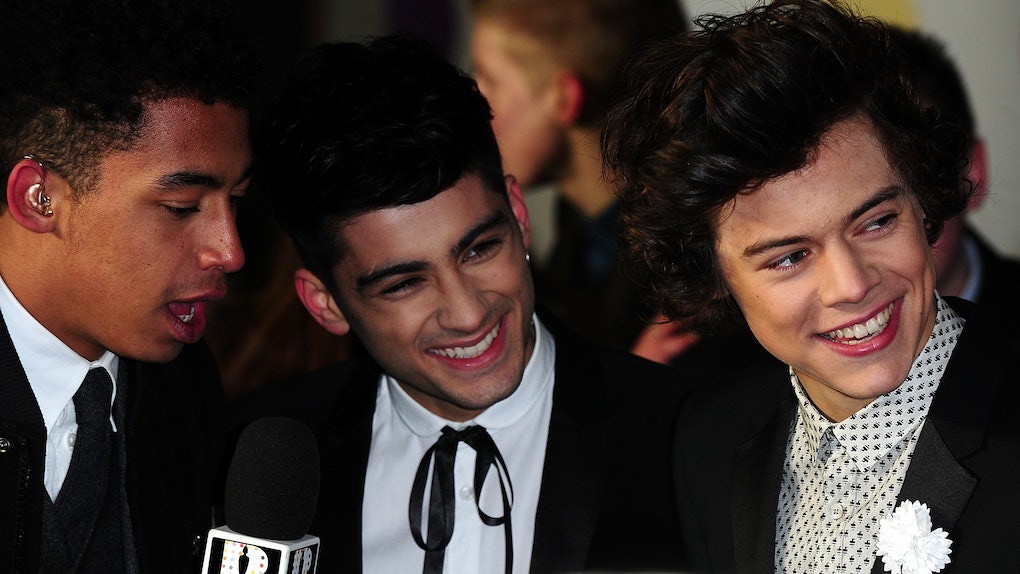 On Saturday, Nov. 16, Harry Styles made his hosting debut on Saturday Night Live a memorable one with a throwback, albeit seemingly barbed, reference to his 1D days. Before performing "Lights Up" and "Watermelon Sugar," the singer weighed in on his beginnings in the music industry — and he appeared to take the claws out while referencing Zayn Malik. While Styles didn't reference his former One Direction bandmate by name, these tweets about Harry Styles shading Zayn Malik on SNL are majorly taking sides after the apparent dig.

Before Harry Styles, Zayn Malik, Niall Horan, Louis Tomlinson, and Liam Payne had their own solo careers, they were gifting Directioners with hits like "What Makes You Beautiful" and "Story of My Life." But that ended when One Direction announced an indefinite hiatus back in 2015. Considering the group's history with SNL — they appeared in a 2012 SNL sketch playing host Sofia Vergara's kids before appearing again in 2014 opposite Amy Adams — Styles decided to make mention of his "brothers" while seated at a piano during his opening monologue.

"I don't know if you heard or not but I'm not in a boy band anymore," Styles began, addressing the audience. "I was in a band called One Direction. How crazy would it be if they were here tonight?"

However, the singer quickly crushed all hopes of a potential reunion, deadpanning, "Well, they're not."

The "Lights Up" hitmaker's monologue then took on a more heartfelt note as he said, ""I love those guys. They're my brothers. Niall, Liam, Louis, and uh..."

"I'm so grateful Simon Cowell grew us in those test tubes," he added.

Considering that it's not the first time that the Styles has had some shady things to say about Malik, who was the first band member to leave the group on March 25, 2015 to pursue a solo career, the Twitterverse erupted. Fans on both sides of the aisle proclaimed their support for #TeamZayn or #TeamHarry, and the discussion got heated.

A few users pointed out that it was likely that Styles didn't write the joke himself and the line was probably referring to the fact that like Starr, who was the first to leave The Beatles, Malik had also been the first to leave One Direction. However, both Malik and Styles have made no secret of the fact that they weren't the closest before or after their time in the band.

Back in 2017, Malik told US Weekly that he "never really spoke to Harry" even when they were in the band together, adding, "I didn’t really expect that much of a relationship with him."

He added in a later interview with Billboard that he didn't really have a relationship with any of his former bandmates, saying "I don't talk to any of them, really."

For his part, Styles responded to comments that Malik said that One Direction's music wasn't "cool" during an interview with Rolling Stone that same year.

"I think it's a shame he felt that way ... but I never wish anything but luck to anyone doing what they love," he told the publication. "If you're not enjoying something and need to do something else, you absolutely should do that. I'm glad he's doing what he likes, and good luck to him."

From the sounds of things, Directioners shouldn't hold their breath for a reunion anytime soon, but at least we can look forward to new music as Styles prepares to release his sophomore solo album Fine Line in December.