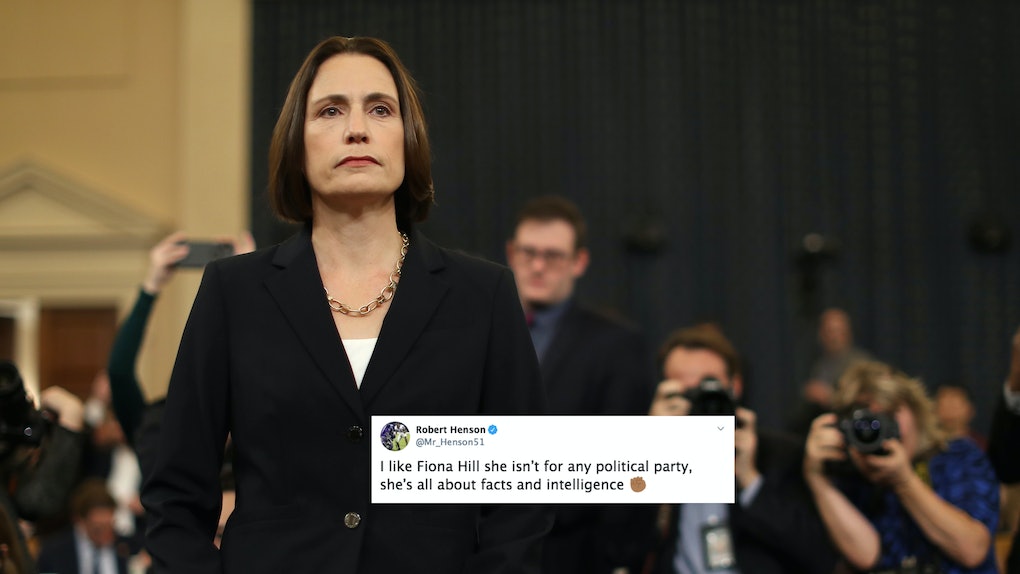 These Tweets About Fiona Hill's Testimony Cheer On Her "DGAF" Vibes

I now present to you, your new impeachment icon. On Thursday, Nov. 21, former National Security Council official Fiona Hill and State Department official for the U.S. Embassy based in Kyiv, Ukraine, David Holmes appeared before the House Intelligence Committee at 9 a.m. ET to deliver their testimonies. Right off the bat, people were captivated by straightforward Hill and her serious BDE (the D stands for "diplomacy"). These tweets about Fiona Hill's testimony can't stop talking about her complete DGAF attitude.

Hill began her testimony by stating her opening remarks would be "short," and stressed that she did not appear in a partisan manner but only to deliver the truth. "I take great pride in the fact that I am a nonpartisan foreign policy expert, who has served under three different Republican and Democratic presidents," Hill said. "I have no interest in advancing the outcome of your inquiry in any particular direction, except toward the truth."

During Hill's testimony, the former national security official directly addressed the conspiracy theory that Ukraine, not Russia, meddled in the 2016 presidential election. The U.S. intelligence community is in agreement that Russia attempted to interfere with the election. Hill referred to the claim of Ukrainian election interference as a "fictional narrative" and called it a "mistake" to believe that Russia wasn't involved. Even more impressively, she said it right to the face of Rep. Devin Nunes, who has been a major proponent of the theory. Hill said,

Some of you on this committee appear to believe that Russia and its security officers did not conduct a campaign against our country — and that perhaps, somehow, for some reason, Ukraine did. This is a fictional narrative that has been perpetuated and propagated by the Russian security services themselves. ... The unfortunate truth is that Russia was the foreign power that systematically attacked our democratic institutions in 2016.

Hill's testimony caused a stir on Twitter, as many social media users expressed their admiration for the former security official.

Some people on Twitter brought out the memes in response to Hill's straightforward opening statement and her reaction to attending the hearing.

Some Twitters users even suggested they want to grow up to be just like her.

Hill is not the first official with knowledge of the Ukraine situation to testify. On Wednesday, Nov. 20, Ambassador to the European Union (E.U.) Gordon Sondland testified to the House Intelligence Committee that Trump had allegedly directed his personal attorney, Rudy Giuliani, to pressure Ukraine in opening two investigation probes — one into political rival former Vice President Joe Biden and another in Ukraine's involvement in the 2016 presidential election as "quid pro quo." Giuliani has denied that he knows Sondland, and did not respond to Elite Daily's request for comment. Sondland also testified that "everyone" was involved with these orders. "Everyone was in the loop," Sondland said. "It was no secret."

White House Press Secretary Stephanie Grisham addressed Sondland's testimony in a statement to CNN on Nov. 20. "Ambassador Sondland’s testimony made clear that in one of the few brief phone calls he had with President Trump, the President clearly stated that he ‘wanted nothing’ from Ukraine and repeated ‘no quid pro quo over and over again," Grisham told CNN. The White House did not immediately respond to Elite Daily's request for comment.