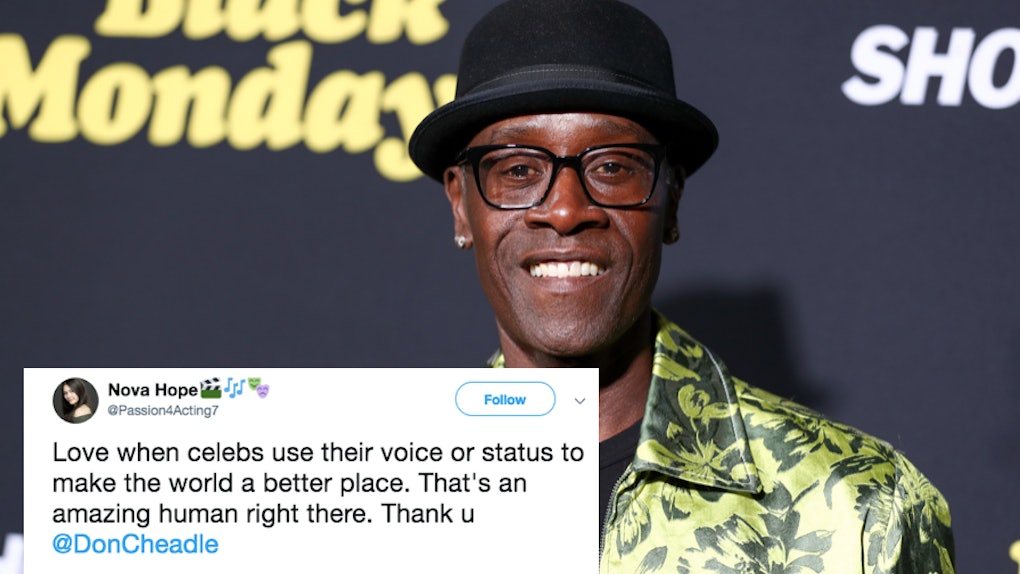 On Feb. 16, the cast of Saturday Night Live brought us another episode filled with political jabs and laughs. However, one of the biggest (and most lauded) statements of the night was from host Don Cheadle, who opted to send a powerful message with his choice of attire. These tweets about Don Cheadle’s "Protect Trans Kids" shirt on SNL are applauding the Avengers actor for using his platform to bring awareness to a cause that's a personal one for many, and they're so heartwarming. Elite Daily reached out to Don Cheadle's representation for further comment on the message behind the printed shirt, but did not hear back by the time of publication.

Viewers might know Don Cheadle from the Avengers and Iron Man series as well as other big projects like Hotel Rwanda and House of Lies. He's been a household name for decades, and I was excited that he was finally hosting Saturday, Feb. 67's installment of the long-running comedy series for the very first time.

While introducing Gary Clark Jr., the musical guest for the evening's show, Cheadle stepped out while wearing a black t-shirt printed with the powerful message: "Protect Trans Kids," and the audience was definitely feeling the simple yet empowering gesture. As the Austin, Texas-born guitarist played an electric version of "Pearl Cadillac," viewers headed to Twitter to flood the social media platform with tweets about Cheadle's fashion choice.

The response on social media was overwhelmingly positive, with viewers applauding Cheadle for standing up as an ally to the transgender community. Many agreed that the actor's message is an important one, considering the troubling statistics surrounding transgender-identifying people in the United States.

According to Forbes, 20 transgender people were killed in 2018, and the community faces systematic discrimination in the workplace and at schools, as well as regular harassment and violence. An Ipsos study found that Americans are more likely than any other Western country to believe that transgender people have a mental illness (32 percent) or are committing a sin (30 percent). Members of the transgender community are nine times more likely than the regular population to attempt suicide in response to stigma and harassment, according to the 2015 U.S. Transgender Survey. In addition, legislation under Trump's administration hasn't been the most friendly to the transgender community, most recently with the Supreme Court upholding the administration's transgender military ban in January 2019.

Obviously, society has a ways to go until the community has full equality, but Cheadle is taking a step in the right direction by raising national awareness about transgender youth, who are particularly prone to high suicide rates, per Forbes. In the meantime, it sounds like the transgender community has a superhero in their corner.