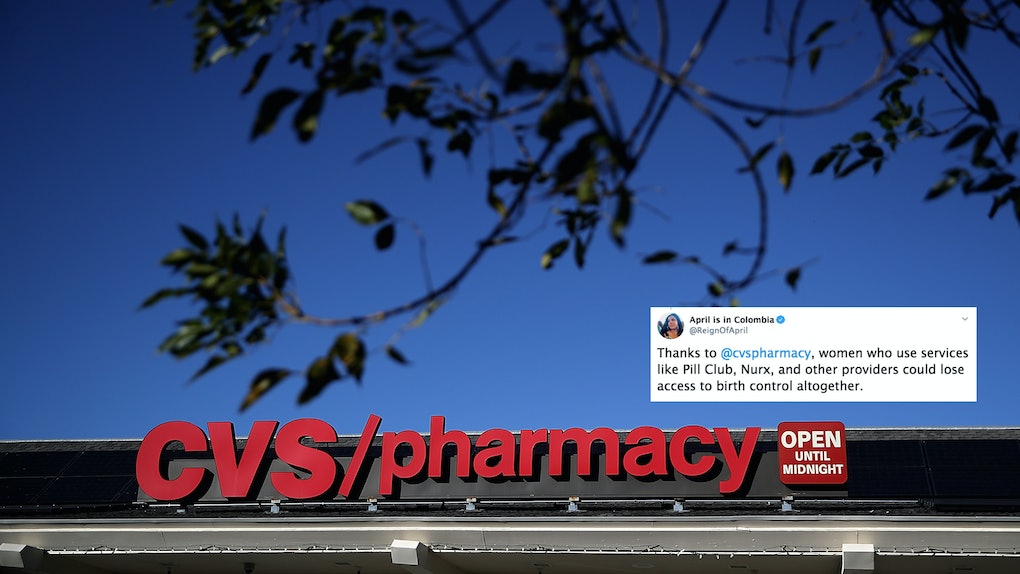 On Thursday, Aug. 15, two hashtags went viral on Twitter calling out a popular pharmacy chain for allegedly making controversial decisions concerning reproductive health for patients. In case you're curious as to what's going on, these tweets about CVS and birth control delivery coverage will fill you in.

On Thursday, Aug. 15, reports surfaced that CVS Caremark, a subsidiary of CVS Health that manages prescriptions, is allegedly cutting reimbursement rates for mail order birth control pill companies. In a page on its website, the mail order birth control service Pill Club alleged that CVS Caremark was changing its payment policies, which would in turn prevent Pill Club from being able to continue to provide birth control by mail to people using the health policy. A spokesperson for Pill Club told Elite Daily by email that the company had been notified of the change in early July, and had notified customers by email on Aug. 15. In a statement to Elite Daily, CVS Caremark called the claims by Pill Club "extremely misleading," and said,

The Pill Club continues to be a participating pharmacy in our network and there is no impact on its customers’ access to contraceptives. We are committed to providing access to women’s health care and it is irresponsible for The Pill Club to suggest otherwise in an effort to maximize their profits at the expense of our PBM [pharmacy benefit manager] clients.

In an email to Elite Daily on Aug. 15, Ali Hartley, vice president of legal compliance at Pill Club, said that the company could not share details on the pricing change due to contract confidentiality, and that if CVS Caremark did not change course in the "next few weeks" the company would not be able to provide birth control to CVS Caremark customers. She added that tens of thousands of individuals would be affected.

Hartley shared the projected impact of the change, writing,

Millions of women nationwide are already struggling to access affordable birth control, and Pill Club is trying to close that gap. ... The actions of CVS could effectively deprive tens of thousands of these women of the right to make personal decisions about their own health care. We’re urging CVS to reverse course and be a leader in the fight to help women get the basic health care they need.

As soon as these allegations surfaced, reproductive health activists and other concerned citizens took to Twitter. NARAL Pro-Choice America President Ilyse Hogue pointed out on Twitter that by allegedly cutting these rates, birth control could become inaccessible to "tens of thousands" of individuals across the United States. Oftentimes, patients rely on birth control delivery if a pharmacy is not close to them, or if they have disabilities that prevent them from traveling. Individuals may also choose mail-order birth control for privacy reasons or issues of cost.

According to a July 2018 report from the Guttmacher Institute, four out of five women in the United States have used birth control pills, and pills are the most widely used contraceptive method among women in their teens and 20s, as well as childless women and college graduates. So, these allegations could seriously impact millions of people across the country.

The conversation surrounding reproductive health in the United States is only getting hotter, but clearly Twitter isn't backing down without a fight.

More like this
Will Colleges Require A Coronavirus Vaccine In Fall 2021? The Rules Are Clear
By Rhyma Castillo
Ivanka Trump's Women's Initiative Failed Inspection, & It's A Mess
By Rhyma Castillo
These Tweets & Memes About Matt Gaetz's Venmo All Make The Same Joke
By Cianna Garrison
Stay up to date