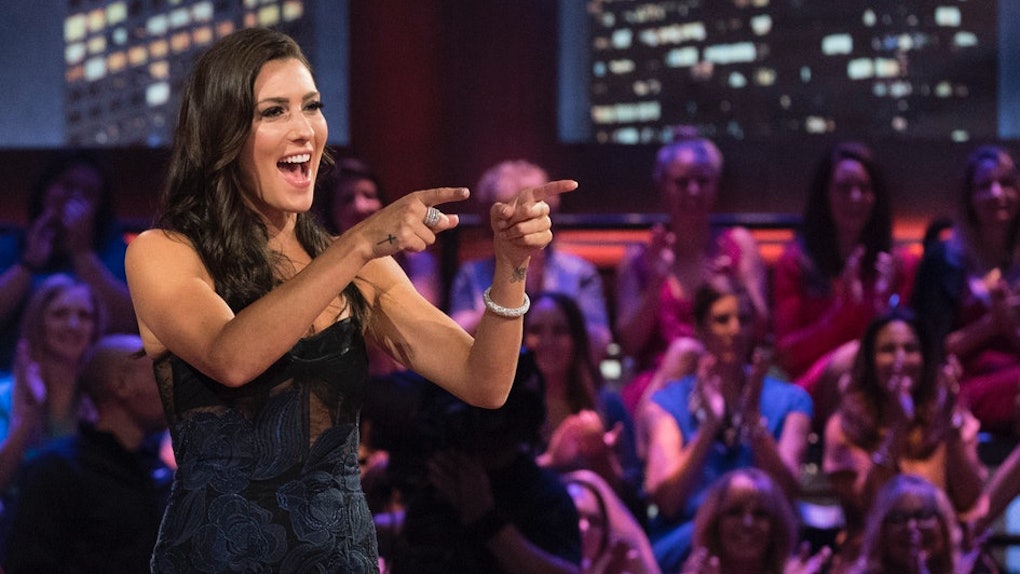 Everyone knows by now that Bachelor in Paradise is one of the most dramatic reality shows on TV. It's why people watch it, after all. But something happened tonight that people weren't expecting at all: Becca showed up to have a talk with Colton ...and probably to start some drama. The whole situation left Colton (and Tia!) with some really uncomfortable feelings to grapple with. And fans are all about it. These tweets about Becca on Bachelor in Paradise prove that Bachelor Nation is all in when it comes the show's dramatic twists and turns.

Everyone's jaw basically dropped to the floor when Becca showed up. But no jaw dropped lower or harder than Colton's. So, what was the purpose of Becca's visit? She was essentially talking to all the gals about the guys. I mean, she knows practically all of them, so of course she'd be the best person to talk the girls through all the drama.

As expected, Becca took Tia aside to have a conversation about everything that's gone down so far. That fact left Colton in tears, which was totally unexpected.

And fans were pretty much eating it up. There are fans on both sides of the situation, of course. On one hand, some fans really feel for Colton, especially because his one chance with Becca was totally ruined by Tia. On the other hand, they're starting to see Colton's true colors on Paradise (he hasn't exactly been fair to Tia) and they're not exactly feeling sorry for him.

In any case, Bachelor Nation had a whole lot to say about the dramatic situation. Some fans were super confused about why Tia was even there, which is totally valid:

Like I said before, some people were feeling really sorry for Colton. I mean, he cried, so I guess that's a valid way to feel for him.

Other members of Bachelor Nation were all about the drama.

Becca's arrival in Paradise came just as Colton was trying to navigate the end of his relationship with Tia and what the aftermath would look like. Apparently, he wasn't terribly interested in pursuing a relationship with Tia right away. He even told her he wanted to explore all his options, which people on the show thought was ridiculous since they have so much history together. Thankfully, Tia took the high road and decided to move on.

In any case, Becca came to clear the air and make sure all was perfect in paradise, so to speak. And that was obviously a really confusing and uncomfortable situation to confront ...especially for Colton.

"I want to throw up. I don't feel good," Colton revealed while Tia and Becca were having their private conversation.

Colton was so caught off guard about the fact that Becca showed up that he had to excuse himself from the rest of the guys. He was clearly disturbed by the whole situation, which is unfortunate, but makes for some really interesting television. I guess Bachelor Nation will have to see how this all plays out.