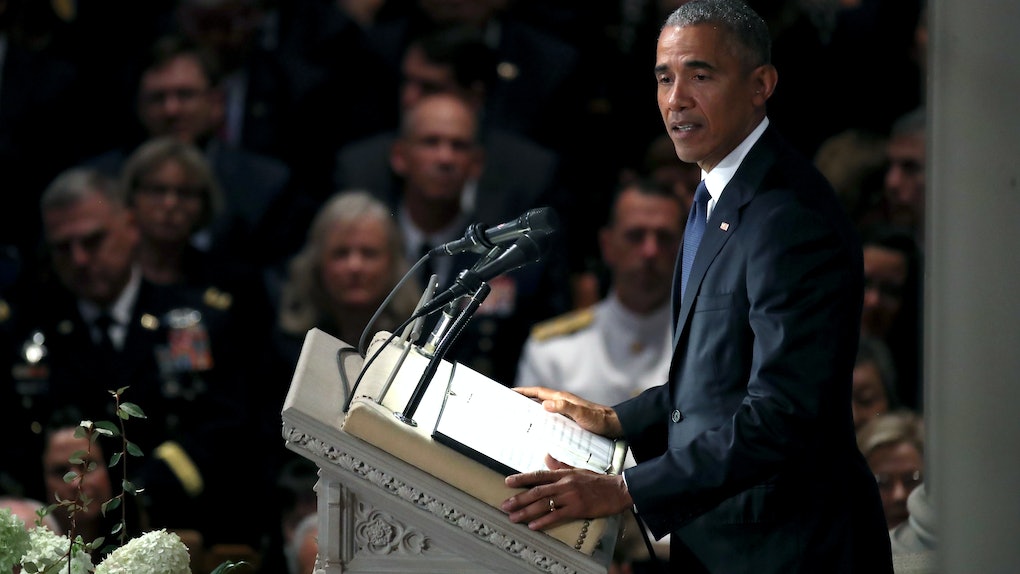 On Friday, Sept. 7, former President Barack Obama delivered a speech in Illinois to an outpouring of reactions, both in the crowd and online. Among a host of issues, he spoke about current President Donald Trump and the need for change in the country. And if the tweets about Barack Obama's Illinois speech are any indication, a lot of people were more than ready for his message.

Obama was speaking at University of Illinois at Urbana-Champaign Friday to receive an ethics award. His speech was met with noticeable awe-struck silence interrupted by bursts of applause.

In speeches previous, Obama and his wife, Michelle, have avoided using the president's name, opting to make references to him instead. But in a rare move, Obama mentioned his successor by name in his Friday speech. "This did not start with Donald Trump. He is the symptom, not the cause," he told the young-leaning crowd. "He is just capitalizing on resentment that politicians have been fanning for years. A fear, an anger that is rooted in our past but is also borne in our enormous upheavals that have taken place in your brief lifetimes."

Notably, he slammed the president for his response to the Charlottesville attack and not taking a stronger tack against white supremacists.

But the former president's speech wasn't just a bash-Trump session. He largely criticized the GOP and stressed the importance of getting beyond hyper-partisanship.

Obama also devoted a good portion of his remarks to encouraging people — young people especially — to take their power to the polls and vote in the November midterm elections.

"You have the power to make sure America sees a brighter future," Obama said. "If you don't like what's going on right now — and you shouldn't — don't complain. ... Don't put your head in the sand, don't boo. Vote!"

On Twitter, lots of users were clearly in support of not just Obama's message, but how he delivered it.

In fact, it was because Obama didn't just focus his speech on Trump, and didn't stoop to "his level," that many users seemed to applaud it.

The speech apparently even brought up some Michael Scott-gif-worthy emotions for some users.

One user even swung low by referencing a speech by Trump on Thursday night wherein he struggled to say the word "anonymous" when talking about the unknown staffer in his administration who authored the op-ed this week.

In fact, Obama's speech seemed to come at a moment ripe for the picking. The midterm elections are just over eight weeks away, and Democrats are gaining steam to flip the House from red to blue. This week, Trump's presidency endured one of its most trying weeks yet, with the publication of an anonymous op-ed by someone inside his own inner circle, and a damning book forthcoming from Bob Woodward. The president's own former campaign chairman, Paul Manafort, is scheduled to stand trial for the second time later this month after being convicted on eight counts of financial fraud on Aug. 21. The same day, Trump's former personal lawyer pleaded guilty to financial crimes and invoked the president as an unnamed co-conspirator. A few other former Trump staffers are cooperating with FBI Special Counsel Robert Mueller in his investigation into connections between Russia and the Trump campaign.

Despite other public appearances, this was Obama's first honest foray back into the political sphere since leaving office. Friday's speech kicked off a series of planned speeches for Obama to rally for his fellow Democrats up for reelection this fall. So if you missed this speech, you'll have more chances to hear him in action. Or, you can watch it here. (Trust me, it's worth it.)