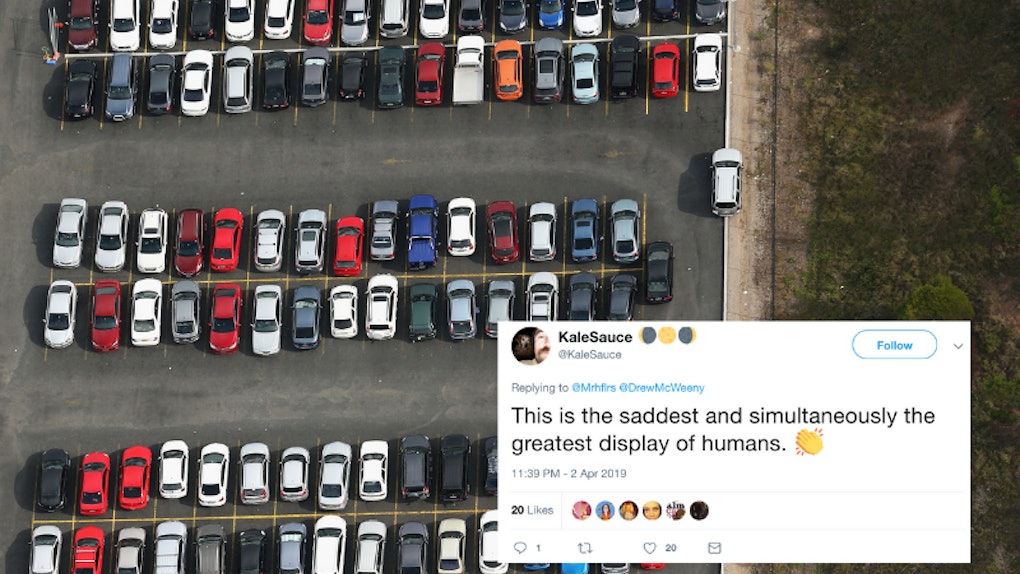 When it comes to living in L.A., you can always count on sunny weather, bad traffic, and standoffs over the very limited parking that's available. Angelenos can get aggressive about marking their claim, and one Koreatown resident took to Twitter to document one such showdown between two cars who refused to back down. Twitter user @Mrhflrs live-streamed the hours-long exchange on the social media platform, and these tweets about a Koreatown parking spot standoff in L.A. are losing it over the drama.

On Monday, April 1, the internet rallied behind #TeamSilverCar and #TeamBlack Car as they watched the two drivers face off on Twitter user @Mrhflrs's feed. Mariah, an L.A. resident who lives in the city's Koreatown neighborhood, took to Twitter late Monday night to let viewers know that a silver car was blocking a black car from parallel parking in a parking spot. From a video timestamped at 6:35 p.m. to the conclusion at 9 p.m., @Mrhflrs documented the hours-long tense exchange as the two drivers faced off and refused to budge on the coveted spot.

She shared what all of us were thinking when she captioned a video of the cars both turning on their blinkers but refusing to move "Petty level 6,000" 15 minutes after the standoff started. Little did she know that that was just the beginning, as the cars would go on to disrupt traffic, cause slowdowns, and lead to a "symphony of horns" are other drivers attempted to navigate past them.

At 7:19 p.m., Mariah offered some insight on how the stalemate got started.

"I would like to add that I have no clue how us 3 ended up here but it seems like black car drove past a spot and then did a fast stop and reverse and silver cars was like, ‘Absolutely the f*ck not’ and did a classic box in," she tweeted.

In a statement to Elite Daily on April 3, Mariah clarified, "I sort of just walked in on this weird stalemate, but it seems like the black car was in the right."

Several users who commented on the tweet said that while it originally looked like the black car had given up the spot by driving past it, it's likely that it was doing so in an effort to parallel park.

At 7:30, it looked like the more than one-hour standoff would come to an end when a car in front pulled out of a parking spot, leaving them both free to park.

In an unlikely turn of events, Mariah reported that both drivers seemed unwilling to make the first move to leave their vehicles, either because it was an awkward situation or they were scared of their opponent, but the silver car passenger finally got out and left. @Mrhflrs left a note on both of their cars asking for their side of the story, but told Elite Daily that she hadn't heard back yet.

Still, Twitter is taking this whole showdown into their own hands and airing their thoughts on the whole thing, because it's a saga.

It was, as one user referred to it, the "duel of a century" with followers taking both sides. Even Chrissy Teigen put her two cents in.

Others quipped that the petty exchange was just a day in the life of an L.A. resident struggling to find parking.

Still, others couldn't help but notice that the situation was very much like a certain Seinfeld episode. When life imitates art, ladies and gentlemen.

As Monday, the apparent driver of the silver car responded with a long, flowery explanation of what went down.

Someone who identified themselves in an email as "Silver Car" shared that the black car and silver car go way back, and what might seem like taunting someone over a parking spot is actually nothing more than true affection. LOL, I'm not sure about that. Since "Black Car" has yet to weigh in, you can still turn to the Twitterverse to see how people are supporting their car of choice.