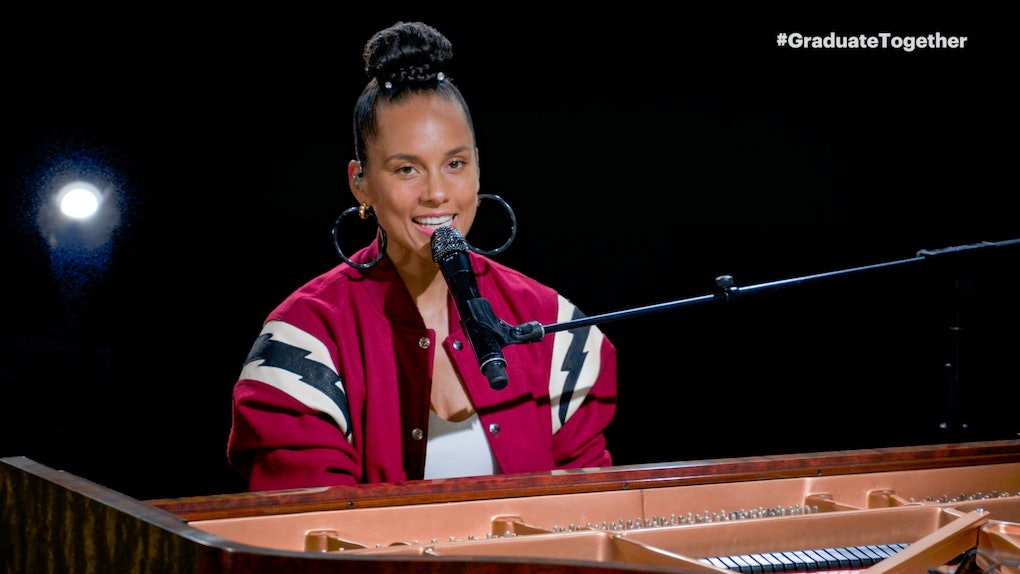 The entertainment industry is full of strong, unique women with an abundance of talent. Luckily, many of those women in the music world channel their personalities into their work to create music magic for their fans. Over the years, dozens of artists have put out songs about girl power full of emotion, strength, and individuality.

Girl power songs are the perfect addition to any playlist. Especially those for birthday outings, bachelorette parties, backyard hangouts, or simply anytime you and your best gals get together. If you need a song that will make you feel like the badass you are, these are perfect options. These tunes are also go-tos for if you're struggling with self-confidence, or are looking to embrace your womanhood as you embark on a new journey, whether that be school, work, or in your personal life.

Scroll down to listen to the best of the best songs about girl power and be sure to add them to your playlist ASAP.

Key's 2012 hit is all about how strength comes within. The chorus reflects how a positive attitude can change everything: "Everybody stands, as she goes by / Cause they can see the flame that's in her eyes / Watch her when she's lighting up the night / Nobody knows that she's a lonely girl / And it's a lonely world / But she gon' let it burn, baby, burn, baby."

Who run the world? GIRLS!

Beyonce even says so. In this anthem, Bey gets women fired up by singing, "This goes out to all my girls / That's in the club rocking the latest / Who will buy it for themselves / And get more money later."

Lauper gets real about not letting a man, or anyone else, hold her back.

She sings: "Some boys take a beautiful girl / And hide her away from the rest of the world / I want to be the one to walk in the sun / Oh girls, they wanna have fun."

Swift digs deep into the world of sexism with this song. On the chorus, she croons: "I'm so sick of running / As fast as I can / Wondering if I'd get there quicker / If I was a man / And I'm so sick of them / Coming at me again' / Cause if I was a man / Then I'd be the man."

The apple doesn't fall far from the tree when it comes to where Cyrus got her bad*ss vibes.

"Don't f*ck with my freedom," she sings on this girl power anthem. "I came back to get me some / I'm nasty, I'm evil / Must be something in the water or that I'm my mother's daughter."

This song will make any girl feel good as hell anytime you listen to it. Like when Lizzo belts out: "Woo girl, need to kick off your shoes / Got to take a deep breath, time to focus on you / All the big fights, long nights that you been through / I got a bottle of Tequila I been saving for you / Boss up and change your life."

Steinfeld sings about how all women are different, but there's one thing they all have in common: being awesome.

"Most girls are smart and strong and beautiful," she sings. "Most girls, work hard, go far, we are unstoppable / Most girls, our fight to make every day / No two are the same."

Lopez knows there's more to being a woman then cooking and cleaning and she wants others to know that too.

After listening to Grande's song, you, too, will start believing that God is a woman.

If any girl is in a funk after going through a bad breakup, this song by Lipa can help get you out of it. In it, she sings about kicking a terrible ex completely out of her life, because she doesn't need that energy.

"Confident" will make you feel like you can take on the world with lyrics like “It's time for me to take it/ I'm the boss right now," and "I make my own choice/ B*tch, I run this show."

Here, instead of using the phrase "Like a Girl" to belittle others into thinking they’re weak, Lizzo recasts it to remind girls they’re powerful and encourage them to be strong and independent.

"Rare" is about that moment in a relationship when you realize you’re so much better off without that other person. Gomez sings in the chorus, "I know that I’m special (So special), yeah/ And I’ll bet there's somebody else out there/ To tell me I’m rare." If you’re ever feeling like you’re less than what you’re worth after a breakup, blast "Rare" because the lyrics will remind you that you’re special and loved.

Megan Thee Stallion’s original "Savage" track off her Suga EP was amazing already for it’s messages about having pride and confidence in yourself, so Beyoncé’s verse in the remix only made it that much more powerful. During Beyoncé’s part, she declares, "I'm a boss, I'm a leader, I pull up in my two-seater," before dedicating her fierce attitude toward her mother. "And my mama was a savage/ Got this sh*t from Tina."

BLACKPINK’s "How You Like That" is the ultimate power anthem because it’s all about being unapologetically yourself. "Don't like me? Then tell me, how you like that?" the group sings.

"Strip" — a song by the British girl group Little Mix — will give you an instant boost of confidence because it’s about loving all types of bodies. "Jiggle all this weight, yeah/ You know I love all of this/ Finally love me naked, sexiest when I'm confident," they proudly sing.

In "Roar," Perry sings about once being afraid to speak up, but now that fear is all gone because she’s learned to trust herself. The chorus goes: "I got the eye of the tiger, a fighter/ Dancing through the fire/ 'Cause I am a champion, and you're gonna hear me roar/ Louder, louder than a lion."

This list couldn’t be complete without some classic Christina Aguilera. "Fighter" is about going through difficult experiences, but coming out of those challenges a tougher and stronger person who can handle anything. "'Cause it makes me that much stronger/ Makes me work a little bit harder/ Makes me that much wiser/ So thanks for making me a fighter," Aguilera belts on the track.

Max declares herself "no damsel in distress" on her Heaven & Hell track "Kings and Queens." Instead, she calls herself a queen who can slay her dragons on her own.

"Don't need to save me/ Once I start breathin' fire, you can't tame me/ And you might think I'm weak without a sword/ But if I had one, it'd be bigger than yours," she sings.

"Wannabe" is the perfect song for a dance party with your friends because it’s about celebrating yourself as you are. In the chorus, ITZY sings: "There's no need to be something/ I'm the best when I'm myself/ I wanna be me, me, me."

"Woman" is an empowering anthem about women not needing men to look after them — they can do everything by themselves. "I buy my own things, I pay my own bills/ These diamond rings, my automobiles," Kesha sings, before launching into the chorus that goes, "'I’m a motherf*cking woman, baby, alright/ I don't need a man to be holding me too tight."

Nothing says girl power more than an all-female collaboration. K/DA — the virtual girl group made up of Madison Beer, Jaira Burns, and Soyeon and Miyeon from (G)I-dle — dropped their single "POP/STARS" for the 2018 League of Legends World Championship, so of course, the lyrics make you feel like nothing can tear you down. "So keep your eyes on me now/ You’ll like whatever you see/ You can't reach my level," the girls sing on the track.

This article was originally published on Sep. 1, 2020

More like this
These Tweets About BTS' 'Bang Bang Con 2021' Sum Up The Epic Performance
By Cianna Garrison
These Songs About Loving Yourself Need To Be On Your Playlist
By Michele Mendez
These Tweets About Taylor Swift's "Mr. Perfectly Fine" All Ask 1 Important Question
By Sydney N. Sweeney
Stay up to date