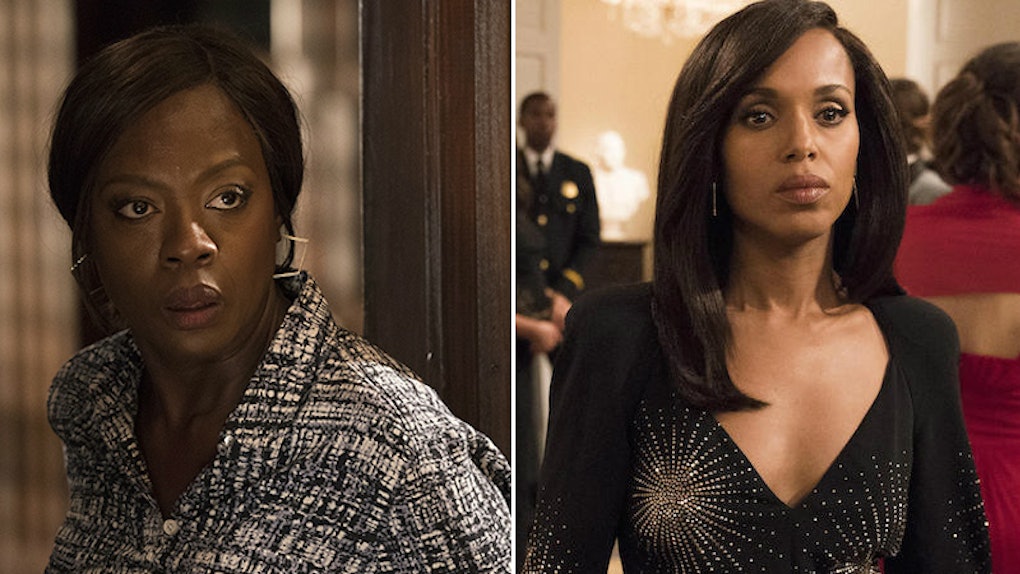 These 'Scandal' & 'HTGAWM' Crossover Details Are So, So Juicy

When Grey's Anatomy debuted back in 2005, little did ABC know they were at the beginning of an empire known as Shondaland. Now expanded to cover the entire Thursday night line up on ABC, soon to colonize sections of Netflix, and with a recently launched website, there seems little Shonda Rimes' empire can't do, except crossover their flagship shows... until now. This week's announcement of two of her biggest series meeting up sent fans into a tizzy. And now we have insight into how it happened along with Scandal and How To Get Away With Murder crossover details.

Scandal and How To Get Away With Murder feature two of Rimes' most popular leads. Kerry Washington stars in the former as political fixer Olivia Pope, and Viola Davis stars in the latter as Annalise Keating, a law professor and defense attorney. The two shows are multiple Emmy and NAACP Image award winners, with Davis becoming the first black woman to win an Emmy Award for Outstanding Lead Actress in a Drama Series for her work on the show. Both shows are notable for being some of the few broadcast network series to star strong black female characters in the leading role.

Moreover, fans have been fantasizing what would happen should Olivia Pope and Annalise Keating ever meet up one day. Would it be an explosion? Would they get along like a house on fire? Would they team up to become an unstoppable force?

We're about to find out.

How did this come about? Talking to Deadline, How To Get Away With Murder's Peter Nowalk revealed the juicy details.

At the beginning of the season, my writers and I were planning out Viola’s entire arc and something in her story organically came up that was very appropriate for Scandal. When I went to Shonda, she heard it. I said, we don’t have to do it, Viola’s arc doesn’t need this, but it’s possible that their stories could cross really organically. She actually pulled up a clip of something from Scandal and their side of the story coalesced perfectly. So it was one of those serendipitous things where we both realized it was good for both characters, and it almost felt like we had been planning it since last season.

One thing that fans should note, this would be the last year that any sort of corssover could happen between these two characters, at least while both shows are on the air. While How To Get Away With Murder is still going strong in the fourth season, Scandal announced this summer that Season 7 would be it's last.

Norwalk confirmed both shows are taking advantage of their positions on the broadcast schedule. Scandal airs at 9 pm on Thursday nights on ABC, How To Get Away With Murder follows directly after at 10 pm. This crossover event will span both hours. But it won't be set in just one character's world.

If I were a viewer, the thing I would want to see is Kerry and Viola in a scene together, that was really the reason to do it. To have storyline together and really shed light on both of their characters in a new way. That, of course, means that Annalise is in Olivia’s world during the Scandal episode, so she’ll be meeting the Scandal characters, and Olivia is in the Murder world, and she’ll be meeting some of the Murder characters. You’ll see that crossover.

This isn't a stand alone event either. Norwalk says the reason he and Shonda agreed to do it is that their meeting will be pivotal to both story arcs, and since it occurs a few episodes before the Scandal series final, probably feed into that show's ultimate ending.

Shondaland's powerhouse of shows, Grey’s Anatomy, Scandal and How To Get Away With Murder will all return to ABC with their respective Season 14, Season 7 and Season 4, at 8, 9 and 10 pm on Thursday, Jan. 18, 2018.