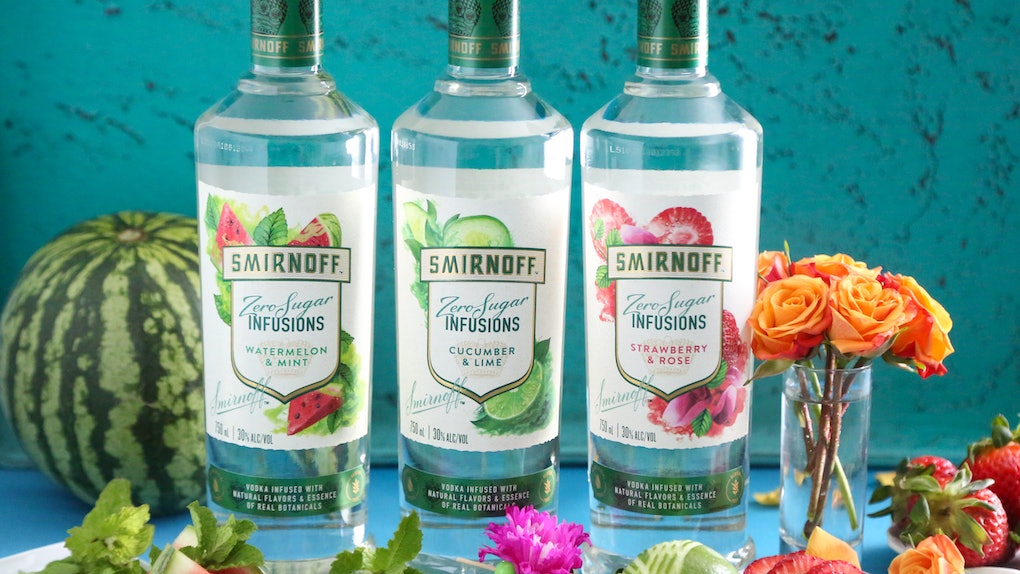 I know it's hard to believe, but patio season — and its accompanying warm weather-approved sips and bites — are just a few weeks away. If you're still on the lookout for a tasty summer libation that you'll want to reach for on all your day drinking excursions, you'll want to check out the new Smirnoff Zero Sugar Infusions Flavored Vodkas for a lighter, more health-conscious twist on your favorite boozy sips. With three tasty sugar-free options rolling out in the coming weeks, you won't have to worry about scrimping on flavor once summer officially starts.

According to a press release shared on Tuesday, May 2, Smirnoff Vodka announced that it will be launching three sugar-free vodkas featuring the flavor combinations of cucumber and lime, watermelon and mint, and strawberry and rose nationwide this month. If you're a vodka devotee, chances are that you've already sampled Smirnoff's extensive lineup of flavored vodkas or you've at least heard about them. While I tend to go for more straightforward vodka-based cocktails, there's a part of me that loves that Smirnoff's flavored creations are pretty much like dessert in a glass. Whether you're sampling boozy sips inspired by the flavors of Cinnamon Churros or Whipped Cream, or opting for a fruity or sour offering, you can always count on treating your tastebuds to an imaginative concoction.

So, when I heard that Smirnoff was rolling out three sugar-free vodkas in three trendy flavors, I was understandably pretty stoked. That, plus the fact that the 30% ABV infusions are all gluten-free and made without any artificial flavors or colors makes them an attractive alternative for anyone who doesn't want a ton of additives in their summertime sips.

The Watermelon & Mint Zero Sugar Infusion immediately piqued my interest, because this sounds like a refreshing ready-made cocktail in a bottle. Per the press release, you'll be tasting, "Juicy watermelon flavor balanced with the taste of fresh mint for a refreshing-tasting finish," so I'd make sure to grab a bottle if that flavor profile sounds right up your ally.

Meanwhile, the Strawberry & Rose infusion sounds like a treat for anyone who's been loving the rose water trend in cocktails. It's described as "a delicate and slightly sweet strawberry flavor with a light rose petal finish," and the company suggests pairing the spirit with some soda water and some slices of strawberry for a bubbly beverage that you'll want to drink all summer long.

Last but not least, citrus lovers who are looking for a more cleansing-palate finish will gravitate towards the Cucumber & Lime infusion. If you favor crisp and refreshing notes over any sweetness, you'll love this vodka, which is exactly what it sounds like: "The crisp, cool flavor of a fresh cucumber paired with the bright citrus notes of lime."

Whichever option you choose, you can't go wrong, because all promise to deliver sugar-free sips without scrimping on flavor for just $11.99 per 750mL bottle.

Jay Sethi, the Vice President of SMIRNOFF at Diageo North America, said in the press release:

As a leader in the vodka category, Smirnoff has built a reputation for creating breakthrough innovations based on consumers' evolving taste preferences. Now more than ever, consumers are demanding lower sugar options that are still delicious.

He continued, "With the launch of new Smirnoff Zero Sugar Infusions, we are proud to embrace the zero sugar trend in order to grow the category and give everyone 21+ an accessible way to enjoy a zero sugar spirit."

Again, all three of these offerings will be rolling out nationwide starting in May, so you'll have at least a few weeks to play mixologist and craft some unique cocktails before summer officially starts. Cheers!