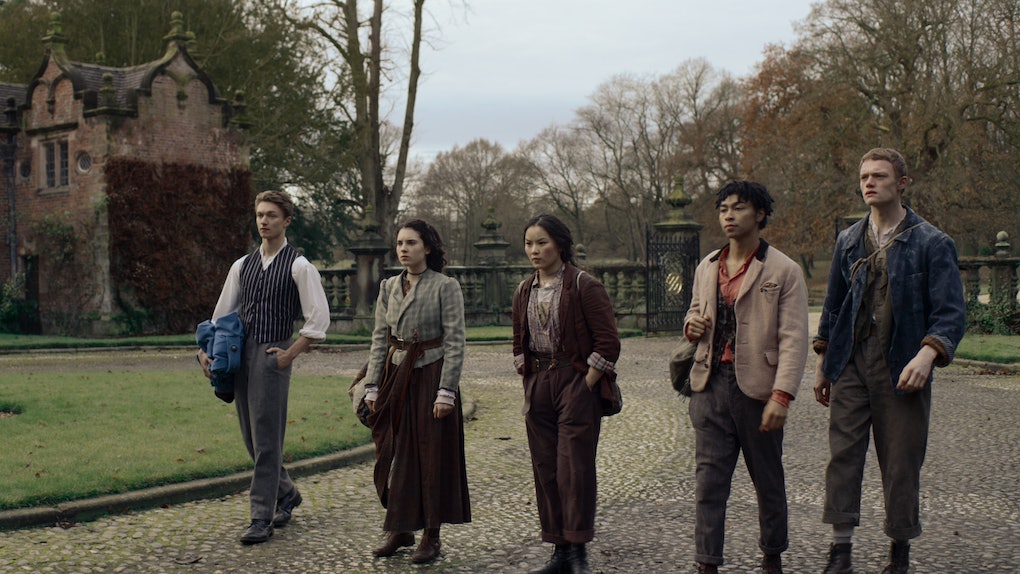 For Netflix viewers, The Irregulars is the second Sherlock Holmes-related title in less than a year. The first, Enola Holmes, was filled with top-level names recognizable from Netflix's most prominent series, including Millie Bobby Brown (Stranger Things), Henry Cavill (The Witcher), and Helena Bonham-Carter (The Crown). But what about The Irregulars? Fans may feel like they've seen some of these actors before, and they're right. These movies and TV shows starring The Irregulars actors will remind you how many roles they've already played.

There's a bit of a running joke in the British TV fandom about how many familiar faces show up in different mystery series. "Where Do I Know That Actor From?" is a game PBS and Netflix fans play when watching British imports. But The Irregulars has a secondary crossover group. Netflix has also taken to casting the same actors over and over from one streamer hit to the next. So, not only will fans recognize some of these faces from other British shows they've seen, but also from other Netflix projects.

More importantly, some of those previous projects are fantastic shows and movies fans should def check out if they haven't seen them — or watch them again if they have. Here's a rundown of where you've seen (or should see) these actors:

Netflix viewers who are into fantasy will most likely recognize Graham right away as Iona from 2020's The Letter for the King. Although Iona was technically not the leading character, Graham stole damn near every scene she was in. The series is currently streaming on Netflix.

Before that, Graham was part of the ensemble cast in 2019's Curfew, a pandemic-themed near-future science fiction series that starred Sean Bean (Game of Thrones) and Adam Brody (The OC). It's currently streaming on Spectrum.

Graham also recently starred in the BBC's miniseries Us, which will air this summer on PBS.

Another actor who Netflix viewers will recognize, Jojo Macari is best known for his role as Kyle in Sex Education, the first two seasons of which are streaming on Netflix.

Macari also recently appeared in Netflix's Cursed as Mogwan. Before that, he played Prince Henry in the final season of Harlots, streaming over on Hulu.

McKell David got his start in 2011 as part of the cast of the original season of Black Mirror, all seasons of which are streaming on Netflix. Since then, he's made appearances in several series, including Marcella (also on Netflix) and Holby City (on Amazon Prime).

But his most prominent role before The Irregulars was on Snatch, co-starring alongside Rupert Grint (Harry Potter) and Phoebe Dynevor (Bridgerton). All three seasons are streaming on Crackle.

Alice doesn't show up until halfway through The Irregulars, but fans will recognize Eileen O'Higgins at once from the award-winning film Brooklyn, in which she co-starred with Saoirse Ronan. She also appeared with Ronan in another award-nominated film, 2018's Mary, Queen of Scots. Viewers most recently saw her in the hit mystery series Dead Still, which is streaming on Acorn TV.

5. Sheila Atim As The Tooth Fairy

Sheila Atim is another familiar face. Hulu fans will know her best from her turn on Harlots (streaming on Hulu), in which she played Limehouse Nell.

Fans will have all sat up when Rory McCann turned up as the man who controls birds in The Irregulars. The actor is most famous for his role as The Hound in Game of Thrones (streaming on HBO Max).

Royce Pierreson is another face familiar to Netflix watchers. His highest-profile role on the streaming service before The Irregulars was as Yennefer's boyfriend Istredd in The Witcher, which is on Netflix. Before that, he was in Wanderlust (also on Netflix) and Our Girl (Amazon Prime).

Before those, his most significant role was as a series regular on the smash BBC hit Line of Duty.

Henry Lloyd-Hughes got his start at Hogwarts as Ravenclaw student Roger Davies in Harry Potter & The Goblet of Fire. Since then, he's gone on to star in a variety of high-profile series, including the BBC's infamous The Inbetweeners (streaming on Amazon Prime), PBS' hit Indian Summers (also on Amazon Prime), and Agatha Christie's The Pale Horse (yep, Amazon Prime).

More recently, Lloyd-Hughes was seen on BBC America's Killing Eve as tech villain Aaron Peel. Netflix fans will most likely recognize him from starring in The English Game from Downton Abbey's James Fellowes, which is currently streaming on Netflix.

9. Clarke Peters As The Linen Man

Clarke Peters has a career stretching back to the 1970s, but his breakthrough role came in the early aughts as Lester Freamon in HBO's The Wire (streaming on HBO Max). Since then, he's starred in tons of stuff, including HBO's Treme and most recently His Dark Materials.

Fans might recognize him as Oscar Clemons from Marvel's Jessica Jones (streaming on Netflix) and Otis in Spike Lee's Da 5 Bloods (also on Netflix). His next role is in Oscar-winner Alejandro Amenábar's first TV series, La Fortuna, which arrives on AMC in the summer of 2021.

The Irregulars Season 1 is on Netflix now.

More like this
This 2021 'Game Of Thrones' Season 8 Trailer Is So Confusing... & So Good
By Ani Bundel
When Will 'Riverdale' Season 5 Return In 2021? Its Mid-Season Break Is Long AF
By Rachel Varina
'The Handmaid’s Tale' Season 4: Release Date, Trailer, Cast, Plot, & More
By Ani Bundel
Stay up to date