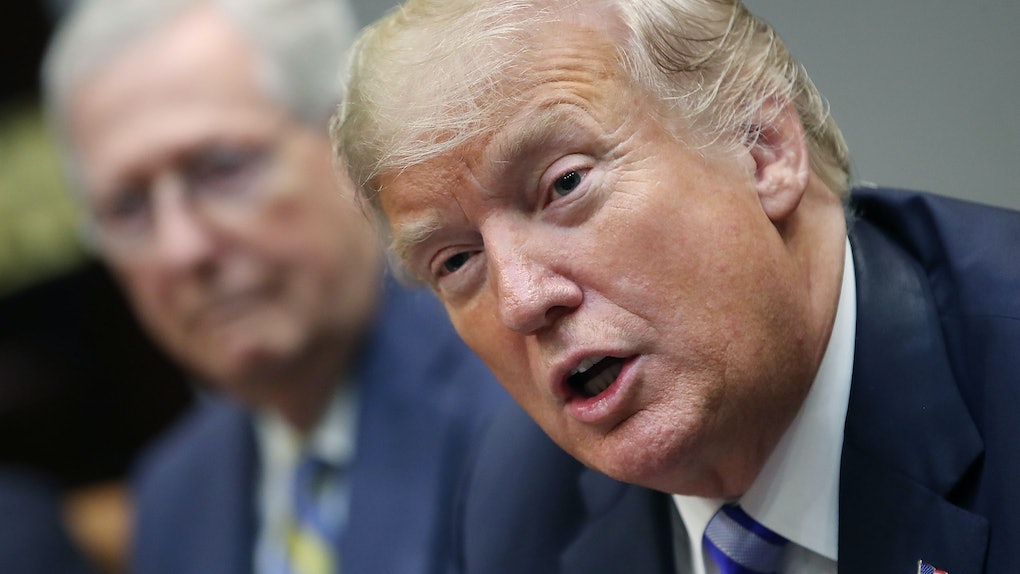 Shockingly, on Wednesday, Sept. 5, The New York Times published an anonymous op-ed (something they pretty much never do). But it wasn' the anonymity of the op-ed that shocked everyone, but rather that the op-ed, which was unabashedly critical of President Donald Trump and his administration, reportedly came from one of Trump's "senior officials." With news like that, it didn't take long for the Internet to react. These memes about The New York Times "resistance" op-ed are so entertaining, I can't even.

The New York Times' op-ed titled "I Am Part of the Resistance," reportedly authored by a "senior official" in the White House, took the internet by storm. The piece makes the claim that many "senior officials" in Trump's administration are working "from within to frustrate parts of his agenda and his worst inclinations," the author writes. The piece alleged that high-ranking members of Trump's staff think he's "amoral" and unprincipled, and try their best to keep him in line for the benefit of the country. In fact, the article slammed Trump's leadership style as "impetuous, adversarial, petty and ineffective." While there might be a "resistance" in Trump's White House, some readers found the piece a little ridiculous, since in the end the writer was still working for the White House and supporting its controversial policies. So what did the internet do? Everyone meme'd the heck out of the op-ed, of course.

A lot of people went to the point that the author might claim to be part of the resistance, but in the end they still work for Trump.

We resist on Wednesdays.

Doritos Locos for anyone who solves the mystery.

And some folks really just wanted to know the source.

Us civilians weren't the the only ones to tweet about the piece, though. Trump sent out his apparent thoughts first in a one-word tweet on Wednesday, Sept. 5. "TREASON?" was all he wrote. He then tweeted again a bit later asking "Does the so-called 'Senior Administration Official' really exist?" Then adding that if the source does exist, the Times is obligated to turn him or her in for "national security purposes."

I don't think the source of the op-ed is going to be revealed any time soon (or ever), but the public did get some info on who it isn't. After its release, people speculated that the op-ed was written by Vice President Mike Pence because it used the word "lodestar"— a term often used by the vice president, according to The Week. However, on Thursday, Sept. 6, Jarrod Agen, Pence's communications director, put out a statement on Twitter denying that the veep penned the op-ed and insisted that Pence signs all the articles he writes. Agen wrote,

The Vice President puts his name on his Op-Eds. The @nytimes should be ashamed and so should the person who wrote the false, illogical, and gutless op-ed. Our office is above such amateur acts.

Was "lodestar" there to throw people off? Would Pence be that sloppy, knowing his job could be on the line should he be outed? Who knows? What I do know, however, is that this whodunnit will probably get really interesting before it gets solved.