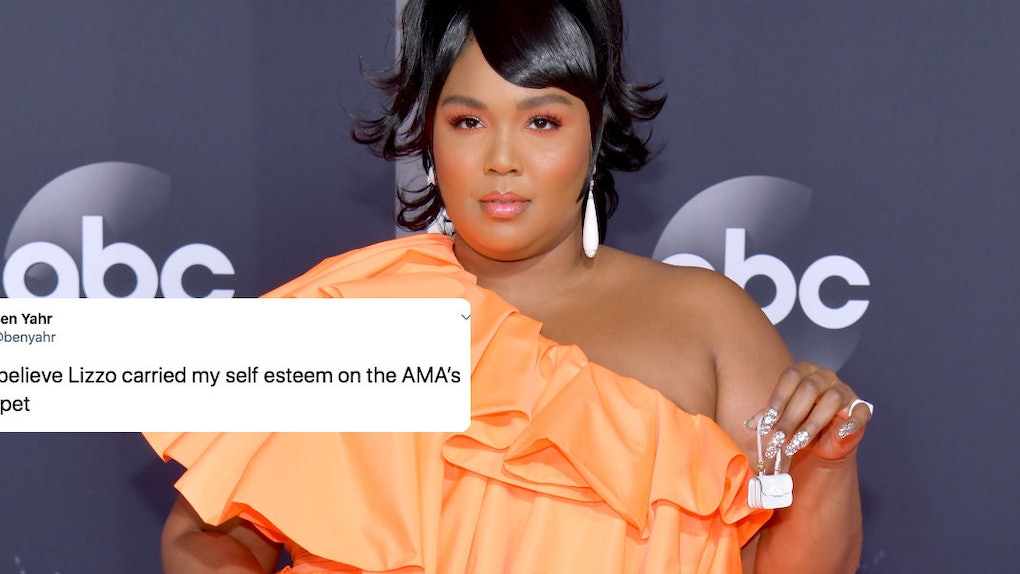 These Memes About Lizzo's Tiny AMAs Purse Are Such A Mood

Lizzo looked good as hell at the 2019 American Music Awards on Nov. 24, but it was her tiny purse that stole the show on the red carpet. The "Truth Hurts" singer stunned in an orange Valentino mini-dress with gorgeous ruffles, but all eyes were on the miniature (I'm talking Barbie doll-sized miniature) handbag she confidently held up while posing for photos. These memes about Lizzo's tiny AMAs purse will help you beat the Monday blues.

Lizzo was honored with three nominations at the AMAs: Best New Artist, Song Soul/R&B, and Favorite Soul/R&B Female Artist. While she didn't walk away with any wins, Lizzo had the crowd in their feelings when she gave an emotional performance of her song "Jerome." While Lizzo's performance got a lot of buzz on social media, fans couldn't help but focus on her little accessory from earlier in the night.

Lizzo was feeling herself at the show, and gave a shoutout to her purse ahead of the AMAs. Such a mood.

"@maisonvalentino bag big enough for my f*cks to give," Lizzo captioned the photo with her purse on full display. "Big body b*tch in a Valentin-HO custom look for @amas."

Cue the hilarious and way-too-relatable memes about Lizzo and her tiny, statement purse.

Even Lizzo posted her own meme.

Some fans recalled Frankie Muniz's tweet to Lizzo on Sept. 25.

The humor wasn't lost on the former Malcolm in the Middle star.

If you're wondering what Lizzo was doing while she retweeted dozens of purse memes, here you go:

On a more serious note, Lizzo reflected on her AMAs performance, responding to a fan who thanked her for never giving up on her music dreams.

Lizzo wrote: "8 years of touring, giving out free tix to my undersold shows, sleepless nights in my car, losing my dad & giving up on music, playing shows for free beer & food w/ -32$ in my bank account, constantly writing songs, hearing ‘no’ but always saying ‘yes’ Glad I never gave up."

Between Lizzo's shockingly tiny purse and amazing performance, she is living proof that she is 100% that b*tch that can do anything she puts her mind to — even if it's just giving fans life by posing with a microscopic accessory.