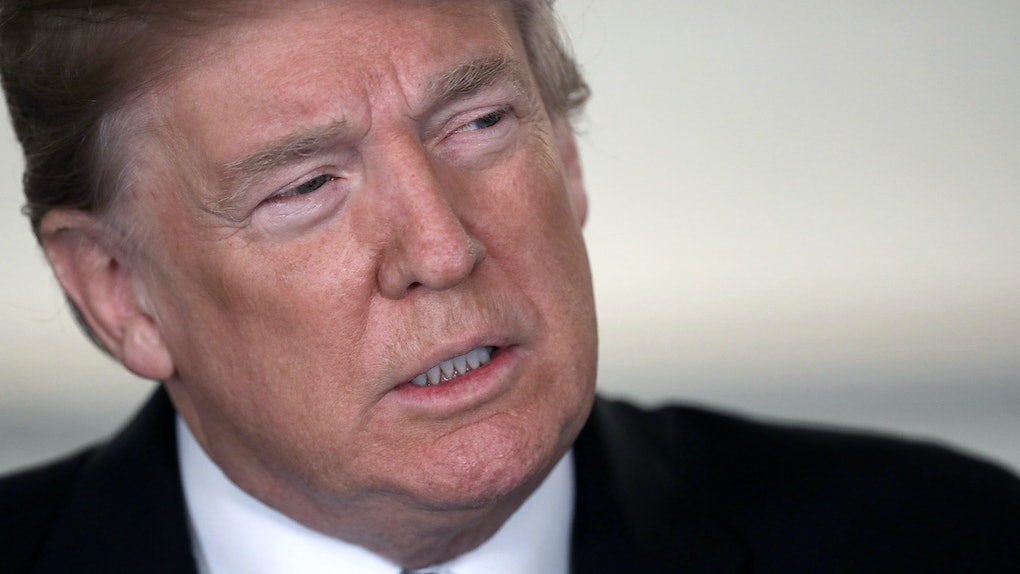 President Donald Trump's words tend to prompt a lot of emotions, from fear and discomfort to shock and anticipation. And many times, just downright confusion. Such was the case on Wednesday, Jan. 23 when the president unveiled what appears to be a new slogan for his border wall with Mexico, and the responses to his new phrase are taking over the internet. These memes about Donald Trump's new border wall slogan are actually perplexed AF.

Here's what he's come up with (and don't laugh): "Build the wall and crime will fall." He announced the slogan via Twitter early Wednesday morning, adding that it's here to stay. "This is the new theme, for two years until the wall is finished (under construction now), of the Republican Party," read Trump's tweet. "Use it and pray." Elite Daily reached out to the White House for any additional comment on or clarification of the president's new slogan, but did not hear back by the time of publication.

And he's serious. After that tweet, he sent another chanting his slogan, tweeting, "BUILD THE WALL & CRIME WILL FALL!"

It didn't take long for Twitter users to flood his mentions, calling out his slogan, offering their own phrases, and mocking him with nursery rhymes.

LOL. The White House did not immediately respond to Elite Daily's request for comment on the responses to the president's slogan.

For his part, Trump has really been trying to drive home the idea that having a wall at the United States southern border will lower crime rates. He has repeatedly asked for $5.7 billion in wall funding to fix what he says is a "humanitarian and security crisis," painting a picture of drugs, gangs, and violence at the border. However, multiple reports have countered that, saying that most drugs enter the U.S. through legal crossing points and that border crossings are at historic lows, which he has yet to address.

Additionally, Democrats just aren't willing to give up that much money for what they say is an "ineffective" and "expensive" wall. Instead, they have offered just over $1 billion for border fencing and barriers in a take-it-or-leave-it kind of deal. Trump has made it clear that that's not enough for him, though, and has threatened to keep the government shut down (precipitated by the fight for border security) for as long as it takes to get the $5.7 billion, even for "years." As of writing, the government has been closed for 33 days and counting, and there's no end in sight. Elite Daily reached out to the White House for further comment on his remarks about keeping the government shut down for "years" at the time, but did not hear back.

Clearly, there are a lot of people with a lot of thoughts about the government shutdown. But there seems to be a pretty easy solution to get people to stop making fun of it: open the government again. Heck, you could even make it its own slogan. Sounds good, right?