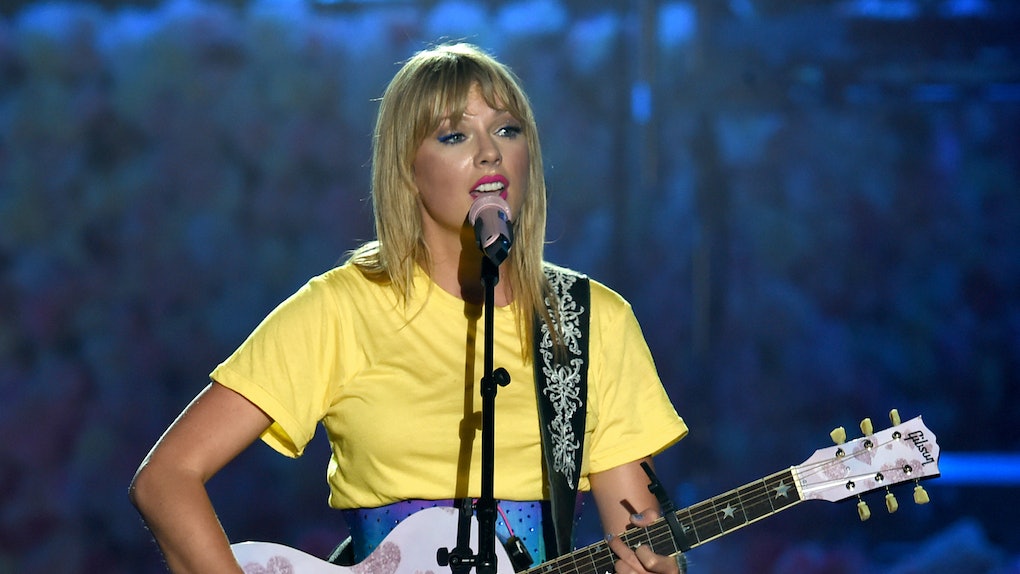 Swifties are anything but calm now that Taylor Swift's dropped her seventh studio album, Lover. It's definitely been a journey from Reputation to Lover, and it's hard to believe that this new era began on March 14 all because of Swift's shoes at the 2019 iHeartRadio Music Awards. If you didn't know, Swift wore heels with butterflies on them, and fans believed this was a clue for her new era. Now, the full album is out, and fans have so many songs and lyrics to think about, including these 'Lover' Instagram captions.

Swift's Lover era has been one big ball of sunshine and love. On April 13, Swift released "ME!," which is all about loving yourself, and then on June 14, she released "You Need To Calm Down" in celebration of Pride Month. In July, we got "The Archer," and just days before the album release, we got the last single, "Lover."

Like I said, a lot of songs on Lover have positive themes, but not all of them. I mean, it wouldn't be a Taylor Swift album if the songs didn't make you feel every emotion, whether that be feelings of happiness, sadness, or anything in between. Whatever mood you're in today, Swift's got a perfect lyric for that Instagram caption you've been looking for!

And there's a dazzling haze, a mysterious way about you, dear, have I known you 20 seconds or 20 years?

My heart's been borrowed and yours has been blue, all's well that ends well to end up with you

I've got 100 thrown-out speeches I almost said to you

From "You Need To Calm Down":

And snakes and stones never broke my bones

'Cause shade never made anybody less gay

Baby doll, when it comes to a lover, I promise that you'll never find another like me

'Cause one of these things is not like the others, livin' in winter, I am your summer

Devils roll the dice, angels roll their eyes, what doesn’t kill me makes me want you more

Bad, bad boy, shiny toy with a price, you know that I bought it

I'd be a fearless leader, I'd be an alpha type

From "I Think He Knows"

I am an architect, I’m drawing up the plans, it’s like I’m 17, nobody understands

He got my heartbeat skipping down 16th Avenue

From "Miss Americana And The Heartbreak Prince"

It's you and me, that's my whole world

I hate accidents, except when we went from friends to this

We were in the backseat, drunk on something stronger than the drinks in the bar

We were a fresh page on the desk, filling in the blanks as we go

From "Death By A Thousand Cuts"

Saying goodbye is death by a thousand cuts

I look through the windows of this love, even though we boarded them up

They say home is where the heart is, but that's not where mine lives

He likes my American smile, like a child when our eyes meet

From "Soon You'll Get Better"

Desperate people find faith, so now I pray to Jesus, too

I'll paint the kitchen neon, I'll brighten up the sky

I know heaven’s a thing, I go there when you touch me, honey

You’re the West Village, you still do it for me baby

Fighting with a true love is boxing with no gloves

Just don't go, meet me in the afterglow

From "It's Nice To Have A Friend"

Feels like home, stay in bed the whole weekend

Call my bluff, call you babe, have my back every day