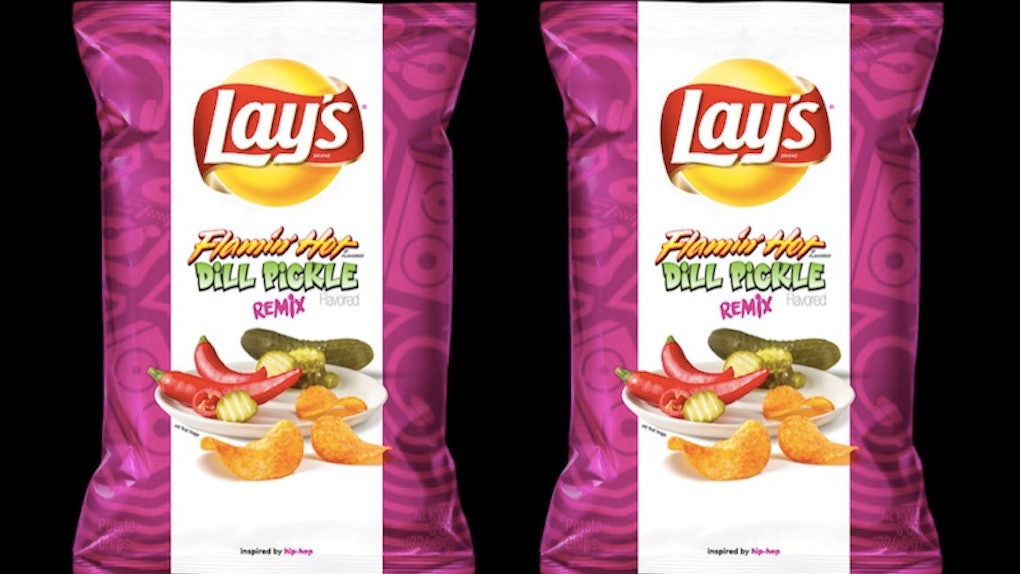 Lay's is about to bring snacking on potato chips to a whole new level, everyone. Why is that, you ask? Well, the company recently unveiled a new collection of flavors that are inspired by music genres (talk about sensory overload). There are three new flavors, to be exact, and each one of them was created to evoke the same emotions that you'd feel after listening to certain tracks. More specifically, Lay's' "Turn Up the Flavor" chips with Bebe Rexha will literally make your tastebuds sing.

Lay's announced its new "Turn Up the Flavor" chips via press release on Wednesday, Feb. 27. According to the company, the three new flavors include Lay's Wavy Electric Lime and Sea Salt, Lay’s Flamin' Hot Dill Pickle Remix, and Lay's Cooked Classic Beer Cheese. The upcoming selections will be on shelves nationwide starting on March 4. (As someone who's obsessed with pickle-flavored everything, I'm particularly excited for that one — but I digress).

Even though each new flavor sounds delicious, you're probably wondering what they have to do with music. You're probably also curious about why Grammy-nominated artist and singer-songwriter Bebe Rexha is involved. Trust me: Once you find out, you'll be reaching for a bag and turning up the volume on your stereo.

In short, each new "Turn Up the Volume" chip flavor is inspired by a music genre, and Bebe Rexha created a custom song fit for each selection. The "tangy and vibrant" Wavy Electric Lime and Sea Salt option was inspired by pop music, while the Flamin' Hot Dill Pickle Remix bag honors hip hop. The Cooked Classic Beer Cheese, on the other hand, is reminiscent of rock and roll.

So, where does Bebe Rexha fit into the flavor mix? According to Lay's' press release, the artist remixed an original song called "Right Here, Right Now" so it fits three separate music genres: pop, hip hop, and rock. When you buy a bag of the new "Turn Up the Volume" chips, you can go to LaysTurnUpTheFlavor.com and use the code provided to download Rexha's music. The remix that you're able to download will depend on which flavor you've chosen.

In other words, you'll be able to listen to music inspired by the Lay's' new chip flavors while you're eating the chips. Again, talk about a sensory overload.

Rexha talked about the musical collaboration in Lay's' press release, and said,

As an artist, I love immersing myself in different music genres because they all make you feel a variety of emotions. You can feel those same emotions when tasting different flavors. That’s why this collaboration with Lay’s felt so right, because we’re bringing an awesome blend of music and flavor to our fans - three flavors, three music genres, and three songs that not only taste and sound great, but make you feel good too.

By now, you're probably making room in your snack cabinet and clearing your kitchen counter for a stereo system. However, as I previously mentioned, you'll have to wait until March 4 to grab a bag. Once that date comes around, try the new flavors ASAP, because they'll only be available for a limited time.

In the meantime, catch yourself up on Bebe Rexha's music and prepare your tastebuds for a flavor overload.