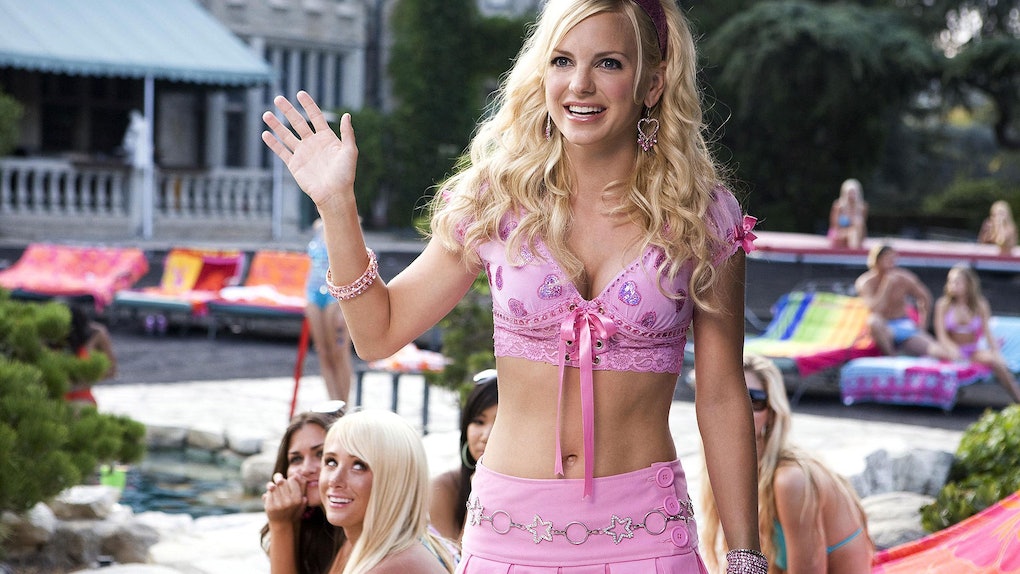 These 'House Bunny' Behind-The-Scenes Secrets From Anna Faris Are So, So Hilarious

A world where we barely knew who Anna Faris and Emma Stone were seems like such a strange one, but it's officially been 10 years since the two women first came onto our radar in the 2008 comedy The House Bunny. The story of Faris' aspiring Playboy girl Shelley helping a sorority of shy and awkward girls gain confidence is an understated classic, and the leading lady has definitely reminded us of that. These House Bunny behind-the-scenes secrets from Anna Faris are hilarious, and you're definitely long overdue for a re-watch of this movie ASAP.

Promptly dismissed from her glamorous life in the Playboy Mansion, Shelley finds herself at the rundown sorority house for the Zeta Alpha Zetas in The House Bunny. Although the socially awkward girls are initially turned off by Shelley's persona, they take her in when they see how easily she captures the attention of guys. As their new house mother, Shelley begins to teach the girls how to be popular and and tries to recruit enough new members for their sorority to remain active. While hanging out with young women so different from herself, Shelley also falls for Colin Hanks' Oliver, a smart guy who definitely isn't the same as men she's dated in the past.

Cute clothes, female friendships, and essentially a young Tom Hanks clone as a love interest? Why isn't this movie talked about more often?

In honor of The House Bunny's anniversary, Faris posted some behind-the-scenes secrets about the film on Twitter. As expected from the funny Faris, some tweets veered more on the humorous side, but I wouldn't necessarily complain if she decides to work on a House Bunny sequel about Shelley's dark path to meth addiction.

Taking a more serious note, Faris then revealed that it took 24 times for the House Bunny team to sell the movie pitch and that in order to gauge such an intense reaction from other actresses when Shelley meets the sorority girls, Faris spoke in a surprise funny voice.

As with any movie involving fashion in some way, Faris pulled a Reese Witherspoon in Legally Blonde and kept several pieces of Shelley's wardrobe. After suspecting that she had more than 70 costume changes throughout the film, Faris also tweeted that five pairs of Shelley's shoes essentially sat unused in her house because she's "forgotten how to walk in them." Same, girl, same.

In The House Bunny, Faris joined a cast that also included Stone, American Idol alum Katharine McPhee, Kat Dennings, Cheetah Girl Kiely Williams, and Rumer Willis. Also celebrating the movie's milestone, McPhee quoted what's inarguably the best line in cinematic history on her Twitter, while Dennings shared an alternate title for the movie on Instagram. Kudos to this film's casting department, because it managed to find stars whose careers have only skyrocketed since The House Bunny premiered.

Since The House Bunny, Faris' presence in comedy has only increased. She has starred on the CBS sitcom Mom since 2013 and headlined several blockbuster comedies such as Overboard and Take Me Home Tonight. The actress also shares portions of her personal life with fans through her podcast Anna Faris Is Unqualified. Who would've thought that the bubbly blonde at the center of The House Bunny would be such a household name today?

Happy birthday, The House Bunny! Thanks for helping us discover a love for the word "manhole" and an appreciation of our eyes as the nipples of the face.