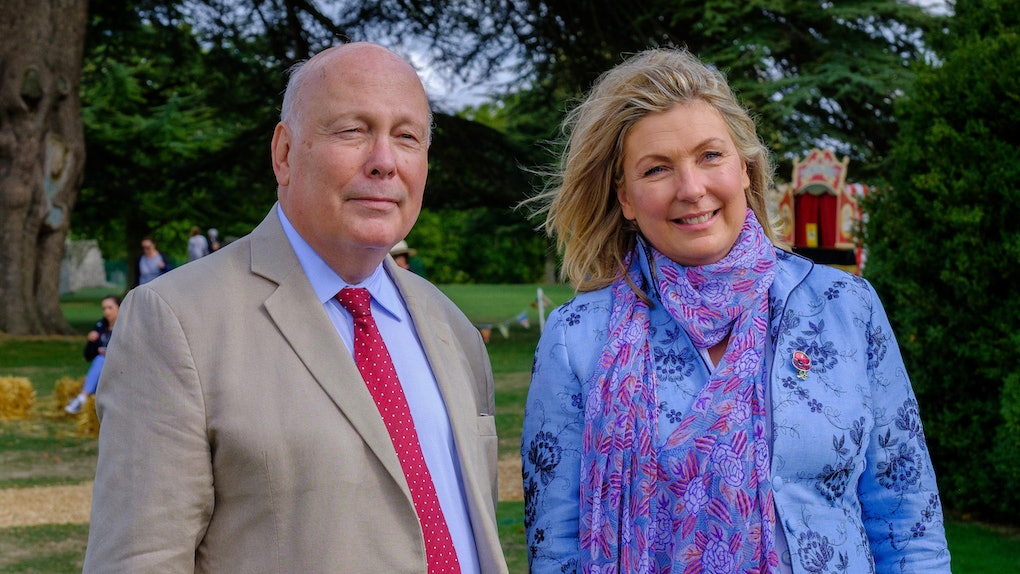 Downton Abbey is returning for one last round, but this time it's not coming to television. Writer Julian Fellowes is penning a movie, set sometimes after the final season in the later 1920s. The movie will be filmed in the same location the TV show was, Highclere Castle – a working castle in England about an hour north of Oxford. Lady Carnarvon, who is the current lady of the estate, admitted she had the perfect way to avoid Downtown Abbey spoilers.

Speaking at the Heroes of Highclere event, just before the estate closed to begin filming for the movie, Lady Carnarvon said:

I try not to be too close to the script, so I don’t say anything wrong to all of you. That’s one of my best techniques actually is not to try to overhear too much... particularly with the TV show, you saw it being filmed, whether Hugh Bonneville lost his money in the railways, whether he lost it and it hasn’t been shown yet, or it has been shown yet, whether it hasn’t been shown in America, but it has been shown in this country. You know how they brought it all out at different times? God, it got muddling.

When asked about the logistics of having a TV show or movie filmed in one's home, Lady Carnarvon revealed the prop shop actually doesn't bring much in:

Anyone who has a stately home where you have filming, you have to manage it quite carefully, because it’s our home, it’s not just a set, it’s not in a studio. They don’t bring very much in. Through they sometimes bring a frilly lampshade in. They sort of share the prop store with Sally in the gift shop and the tea shop room, which is not huge. They bring in some of their own china, which isn’t particularly precious so that if, say, a boom hit the china, I don’t cry because it’s their china.

As for how it actually gets done:

My husband has to get up first thing in the morning to let them in, cause he’s better in the morning than I am, and I tend to let them out at night really. But they come with a program, they’re filming in the dining room, they’re setting up their computers in the saloon, they’re going to use the library as a green room, and they’ve got this scene to do and that scene to do. It’s all very carefully planned how they’re going to shoot each scene, nuanced words, or bit of story. They like being outside. They’re very excited because they’re shooting in autumn, and they used to shoot from February to July.

The most fun memory Lady Carnarvon shared was how they staged the original press screening for the first season.

We had the press screening, which I thought was one of the best. All the press were in the library and that first scene of that particular episode where all the staff are undoing the blinds on the screen and then at the end, we did it for them in the library in real life.

The Downton Abbey movie is expected to arrive sometime in 2019.

More like this
Here's How To Stream 'Nomadland' So You Can Finally Get The Hype
By Rachel Varina
Is Netflix Making A 'To All The Boys' Spinoff Series About Kitty? Here's The Tea
By Rachel Varina
These Tweets About Regé-Jean Page Leaving 'Bridgerton' Are Royal Bummers
By Cianna Garrison
Stay up to date