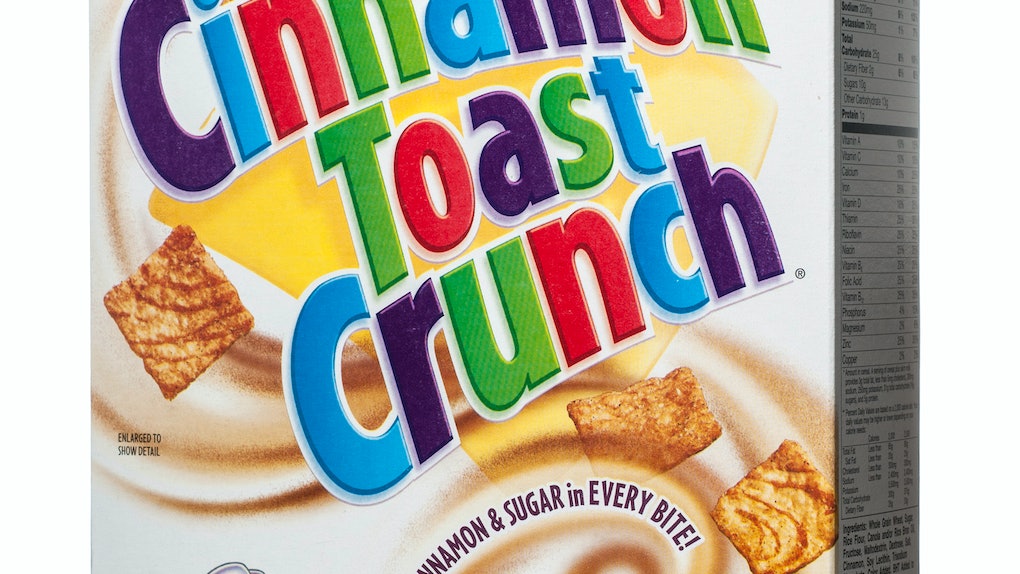 A couple days after #ShrimpGate rocked the internet, Twitter is making light of a stomach-turning situation by imagining finding things other than shrimp tails in their bowls of Cinnamon Toast Crunch. It's been a wild ride since a California man reportedly found what appeared to be shrimp tails in his box of cereal — and the internet quickly got invested in the case. To deal with it the best way people on Twitter know how, they turned to memes, and these Cinnamon Toast Crunch shrimp memes range from hilarious to horrifying as people shared photoshopped surprises of what else they might discover in their cereal bowls.

It all started when Jensen Karp, a comedian who is married to Boy Meets World star Danielle Fishel, took to Twitter on March 22 to ask Cinnamon Toast Crunch, "Why are there shrimp tails in my cereal?" alongside a photo of what appeared to be two shrimp tails coated in the cinnamon sugar topping. In response, Cinnamon Toast Crunch wrote back on Twitter that the so-called shrimp tails appear to be an "accumulation of the cinnamon sugar that sometimes can occur when ingredients aren't thoroughly blended," adding, "We assure you that there's no possibility of cross contamination with shrimp."

A saga ensued as Karp shared tweets of his correspondence with the Cinnamon Toast Crunch Twitter account.

Karp, who responded, "after further investigation with my eyes, these are cinnamon coated SHRIMP TAILS, you weirdos," later said he reportedly found a black substance on the pieces of cereal he'd been eating and what appeared to be dental floss in a taped up bag of the cereal. Karp documented the horrifying evidence by sharing the photos online. According to screenshots of an email response from parent company General Mills on March 23, the company advised him to "provide these items to [his] local law enforcement." It appears General Mills will investigate the matter further with testing, per a screenshot of DMs between Karp and the company, and Cinnamon Toast Crunch released a March 23 statement advising consumers of what to do if packaging appears to be tampered with:

While we are still investigating this matter, we can say with confidence that this did not occur at our facility. We are waiting for the consumer to send us the package to investigate further. Any consumers who notice their cereal box or bag has been tampered with, such as the clear tape that was found in this case, should contact us at 1-800-328-1144.

While finding anything other than cereal in your box would be concerning, people are making light of a nightmare situation and Cinnamon Toast Crunch's response by imagining some other unlikely surprises you might stumble upon in your cereal.

Others made light of the fact that Cinnamon Toast Crunch tried to pass off shrimp tails as cereal, and reimagined how starting your day off with a bowl of CTC would look like.

According to Karp's latest tweets on March 24, he'll be sending in what he believes are shrimp tails to General Mills for testing and will also have a crustacean researcher examine the findings. Only time will tell what the company concludes about the contents of the questionable boxes, but you can head to Twitter in the meantime to join in on the shrimp memes.