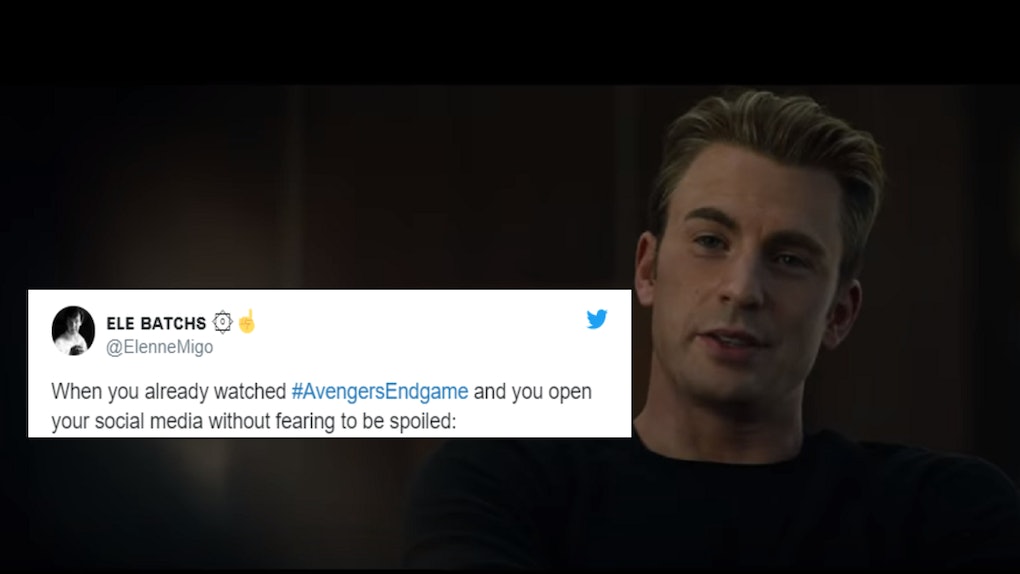 These 'Avengers: Endgame' Memes Will Help You Laugh Through The Tears

This post may contain spoilers for Avengers: Endgame. Avengers: Endgame is still blowing the minds of moviegoers worldwide, but fans on Twitter are trying to protect the movie's details for anyone who has yet to make their way to the theater. Your Twitter feed is usually where spoilers thrive, but Marvel enthusiasts are trying to share their love for the film without ruining it for anyone not in the know. These Avengers: Endgame memes will keep latecomers to the movie calm, but if you're caught up with the Marvel saga, prepare for some laughs after all that sobbing at your Endgame screening.

Detailing the aftermath of Thanos' Avengers: Infinity War disintegration of half of the world's population, Endgame proved hardcore theorists right when it turned out to be a time travel adventure with plenty of throwbacks to the Marvel Cinematic Universe's early days. It takes a devoted superhero fan to keep all of these timelines, cameos, and Easter eggs straight, but regardless of how well they might have followed the story, viewers are paying online tribute to some of their favorite Endgame moments. But how are they doing so without spoiling anyone who didn't manage to snag an opening weekend ticket?

Ahead of the film's release, Endgame directors Joe and Anthony Russo tweeted a statement requesting fans to avoid spreading spoilers. Now that the flick has been out for a few days, people are taking their message seriously, but they're not staying silent. Instead of breaking down specifics with words, Marvel fans are honoring Endgame through a "spoilers with no context" format on Twitter.

This brilliant idea involves posting pics representing bits of Endgame that wouldn't make sense to anyone who hasn't seen the film yet. People holding out on seeing the movie can scroll through Twitter without clawing out their eyeballs, while those who have seen it are in an endless state of LOLing thanks to these memes. Who would've thought that the internet could be great when it follows this kind of guideline?

There are a few recurring images in fans' context-free spoilers, so those unaware could probably figure out a vague concept to anticipate in Endgame. But other than that, good luck in trying to decipher these hilarious posts.

A few Twitter users have also managed to celebrate the film in other ways without spilling major secrets. People have poked fun at a very different set of Russo brothers and are commemorating an action-packed weekend that also included an epic Game of Thrones episode. Even without focusing on the movie's intricate plot, these posts definitely capture the world's whirlwind of emotions since Endgame officially hit theaters on April 26. Has anyone actually recovered from this high yet?

Leave it to Marvel fans to get creative with their love for a movie. While nothing will quite match this finale spirit, the fandom can regroup for even more meme magic when Marvel's Spider-Man: Far from Home debuts this summer. Until then, here's to more Endgame celebration.