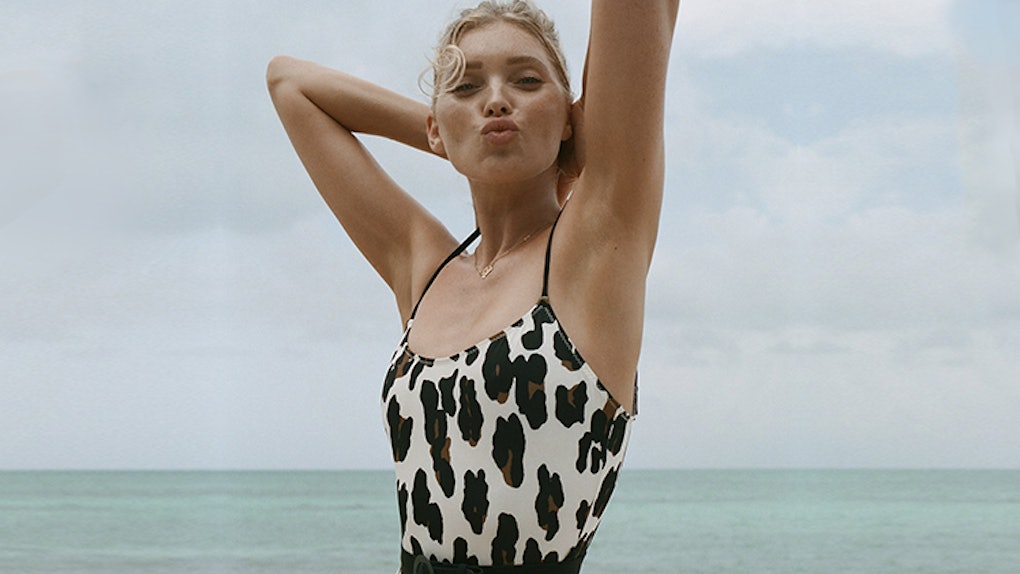 These 8 2019 Swimwear Trends Will Be Everywhere This Summer, According To Lyst

When I was a teenager, you could never catch me in a one-piece bathing suit. Back then, Blue Crush was everyone's summer movie anthem, and mismatched two-piece bikinis with extremely tiny, low-rise bottoms sprinkled beaches everywhere. Then, a few years ago, one-piece bathing suits became the trendiest vacation-friendly silhouette on Instagram, and it didn't take long for me to get rid of all my two pieces. Well, it's about time for everyone to overhaul their bikini stashes again, because these 2019 swimwear trends are too good to pass up.

Every year, Lyst, the global fashion search platform, releases a report predicting the biggest swimwear trends of the summer. Its algorithm compares the shopping behavior of more than 5 million online consumers per month and analyzes the data to determine trends. It also monitors social media mentions and tracks engagement statistics around the world, keeping its finger on the pulse of what fashion lovers everywhere are talking about. It's all very technical on its end, but we're all left with a comprehensive guide to the biggest trends of the year — the holy grail for anyone looking to up their swimwear game this summer. Here are the eight trends you'll want to try stat.

Silhouettes aside, Lyst's report reads, "Searches for bright coloured pieces have seen a 96 percent increase, with customers showing a particular interest in lime green and neon yellow." The search platform confirms the bright hues made a major splash at Coachella's first weekend and have been mentioned on social media more than 35,000 times since January.

Lyst reports that demand for polka dot bikinis spiked 61 percent in January after Nicole Kidman was spotted wearing a black and white polka dot bikini, and demand surged again another 12 percent ahead of Coachella. Both Emily Ratajkowski and Kendall Jenner were spotted (pun intended) wearing the trend during the first weekend of the festival.

Since 2018, Lyst has seen a 66 percent increase in searches for sustainable fashion, including sustainable swimwear. Mara Hoffman is the most-searched-for brand in this category, with searches increasing by 139 percent since the beginning of January. Reformation saw a 43 percent rise in searches in March, while searches for California-based brand Vitamin A increased by 19 percent.

Since March, searches for sequin bikinis spiked 76 percent, mostly in the UK and United States. More specifically, the search platform confirms sequin bikini tops generated 40 percent more page views on Lyst since the beginning of March. Additionally, metallic swimwear is also having a moment ahead of festival season. Lyst says the keywords “metallic one-piece swimsuit” and “metallic swimwear” were the most used by online shoppers, mostly on ASOS and Fashion Nova.

You can thank Selena Gomez for singlehandedly making white swimwear a 2019 summer staple. After she wore a white two-piece in February, searches spiked a whopping 500 percent.

It's no secret the logo trend of the '90s is seeing a major resurgence in fashion, but the throwback style is making its way to swimwear now, too. In March alone, searches for branded swimsuits rose 39 percent. Thanks to celebrities such as the Kardashian-Jenners, Alicia Keys, and Miley Cyrus, bathing suits by brands such as Gucci, Fendi, and Moncler are the most popular searches.

Online searches for animal print swimwear went up 111 percent since January, with Norma Kamali, ASOS, and Melissa Odabash being the most popular brands. Leopard, snakeskin, and cow prints are the most popular prints currently being searched.

Now that Lyst did all the work for you, the hardest part is figuring out which looks you'll rock on the beach all summer long.