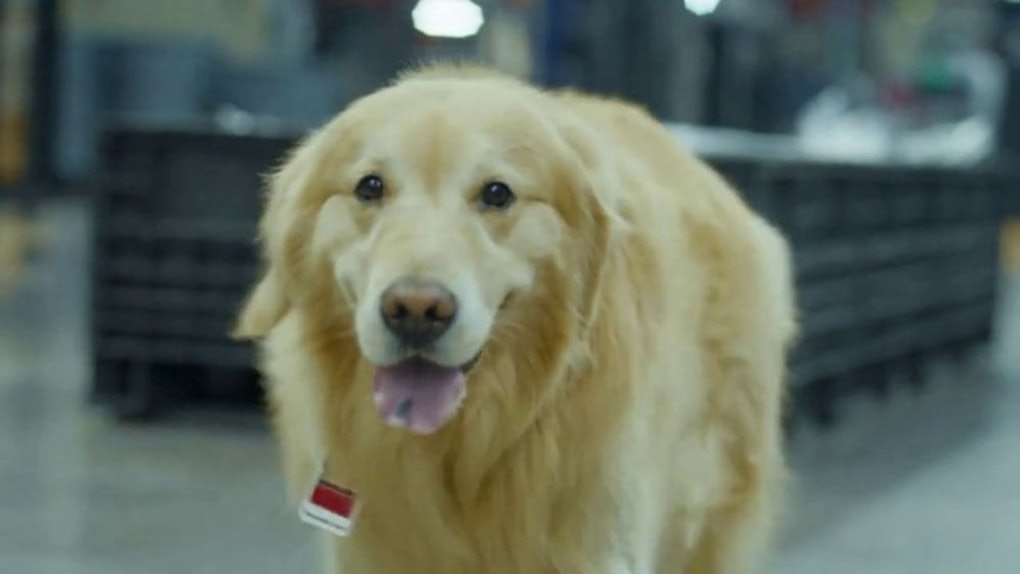 Can I get a "D'awww?" I thought the most emotional I'd get while watching this year's Super Bowl would be if the Pats won yet again and my local, friendly neighborhood Pats super-fan friend would continue to be annoying AF for another year. But I was dead wrong — and it looks like the rest of America agrees with me. In fact, these tweets about Scout in WeatherTech's Super Bowl commercial prove that this Super Bowl isn't about accomplishing the impossible, but rather, the impawsible.

WeatherTech founder David MacNeil underscores one of his greatest passions, his love for dogs, in his latest Super Bowl commercial. The ad promotes his newest line: PetComfort pet-feeding bowls. According to Forbes, the bowls are also premium in terms of the safety of the materials, canine ergonomics and price. The commercial follows the journey of Scout, Macneil's own pup, along with his son Cooper and daughter Devon. According to Sportscar365, MacNeil says he was inspired to create the pet feeding system after losing his last three dogs to cancer. After researching the harmful toxins that can exist in pet bowls, he resolved to make a change.

I think I speak for all pet lovers alike when I say — Thank you, MacNeil. This commercial, along with the new feeding bowl, is a gift.

Fans of the game are falling in woof with him.

I don't know if I'd choose the word booger, but he definitely is beautiful!

Hey, buddy! Can you hear? Do you see me? Does this count as FaceTiming?

5. We Have A Prodigy In Our Midst

Dogs roaming the halls? Riding the elevator up and down? Sounds like my kind of work environment! Are you guys hiring?

So nice to see some fair canine representation at the Super Bowl this year. Great bark, you guys!

8. Take ALL My Money

If loving commercials featuring adorable golden retrievers is wrong, I don't want to be right!

I'm pretty sure they meant to say... pretty "paw"-some!

D'aww. This Super Bowl is shaping up to be less "ruff" than I was expecting!

Scout turned out to be such a heartthrob, he has puppies all over America swooning at the TV. I guess you could call him a "catch!"

12. Josie Has Cast Her Vote

Let's just say that if the Super Bowl commercials were a race to the finish line, Scout's chances of coming in first place would be "golden!"

One thing is for sure: One way to win over the Super Bowl crowd is by creating a product with a whole lot of heart. That's exactly what WeatherTech did: MacNeil didn't just create a bowl — he created a super bowl. And by doing so, he didn't just win over pups all across America, but their owners as well. By purchasing one of WeatherTech's new PetComfort pet-feeding bowls, you're not only investing in your dog's happiness, but in its health as well. If Scout taught us anything, it's that sometimes, you need to go the extra mile to remind your lil bud that you "woof" him with all of your heart.