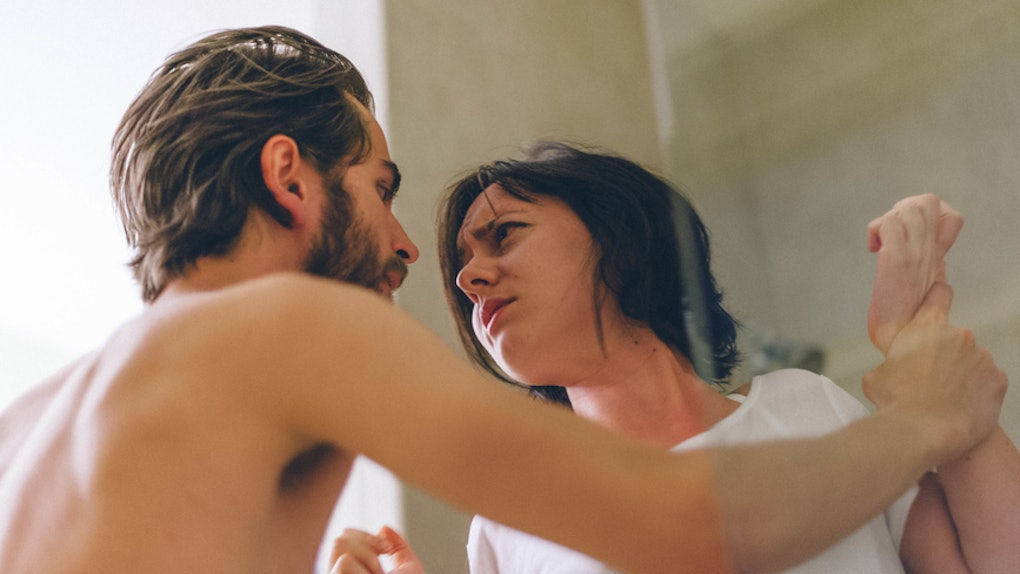 No breakup is ever easy. No matter how mutual or how trivial the relationship, you've still invested time and energy in this person. At some point, there was a hope that this would work out, and now, that hope is gone. That being said, there's a nice way to break up with someone and there's a million and one totally rude and unacceptable ways to dump someone. In a new Reddit AskMen thread, men reveal their worst breakup stories where they themselves were the bad guys.

The original thread asked men a pretty simple question: "What's the shittiest thing you ever done to a woman?" Men responded with dozens of stories about horrible ways they ended things with women who they dated. From the guy who left the woman who was pregnant with their child for another woman to the dude who accidentally dumped his girlfriend on her birthday, these stories are pretty freaking brutal.

So brace yourselves and thank your lucky stars that you (hopefully) have never dated any of these men.

He dumped her on her birthday.

Broke up with a girl after she had done so much for me. She wanted to move in together and I felt she was just moving way too fast. I hadn't realized what day it was and it turned out I broke up with her on her birthday.

He dumped her the day before Valentine's Day.

Broke up with a girl the day before Valentines Day, because it was the right move. Still, I felt like shit for doing it, but it was better than waiting until after.

He forgot to tell her that he's, ya know, moving across the country.

I moved to the other side of the country and didn’t tell her.

He pretended he liked her to get laid.

He "accidentally" lost her number... then blocked her.

I've accidentally lost the numbers of quite a few girls. And then accidentally blocked them on WhatsApp and Facebook, as well.

She sent me nudes. Then I unmatched with her. (Reading other comments makes me feel like what I did isn't so bad.)

He had sex with her twice then never spoke to her again.

Fucked a girl I worked with twice, then never said a single word to her or responded to a text ever again. She quit pretty soon after that. Hope it wasn't me.

Some girl that I was really into did the same thing to me a bit after that. What goes around comes around, I guess.

He had sex with her best friend.

Girl was making me wait for a relationship. My impatient self said 'f*ck it' and I went for her best friend. Her friend and I f*cked not a week after we secretly started seeing each other. Note that all three of us were close friends. She was aware that I liked her, too.

Cheated. Was a verbally abusive jerk on a level that got me doxxed. Now I prefer exercise to sex and therapy to relationships.

He had sex with her then dumped her.

He dumped her out of the blue after two years together.

Broke up with her completely out of the blue after two years. I never talked to her about how incompatible I felt in the relationship because she would tell her parents all of our problems and I didn't want that pressure. It devastated her, as she had been talking to her friends about marriage or moving in with me. But we couldn't have been on a more different page, and I did it all at once with no warning or signs. We were 23.

He dumped her on Christmas Eve.

I dumped a woman on Christmas Eve.

He convinced her to cheat on her long term boyfriend with him.

The worst thing I did was convince the nicest girl I've met to cheat on her long-term boyfriend with whom she lived, with me, for several months, with no intention of actually breaking them up and dating her.

He dumped her because he didn't like her body type.

I met a girl who was super amazing and nice to me in everyway. We dated for a short time.

I broke up with her because I felt ashamed of myself for having shallow thoughts. She was a little heavier then I was usually OK with. I have a history of self-sabotaging behavior and thoughts.

He dumped her the day after Valentine's Day.

I broke up with a girl on February 15.

He left her for another women when she was pregnant with their baby.

Left her when she was pregnant with our child and started seeing someone else. It is my biggest regret in life. Luckily I was blessed enough for her to forgive me. She is now my wife of seven years.

Oof, these were pretty brutal. Here's to hoping every single one of these women has moved on from these jerks and is thriving in every way.