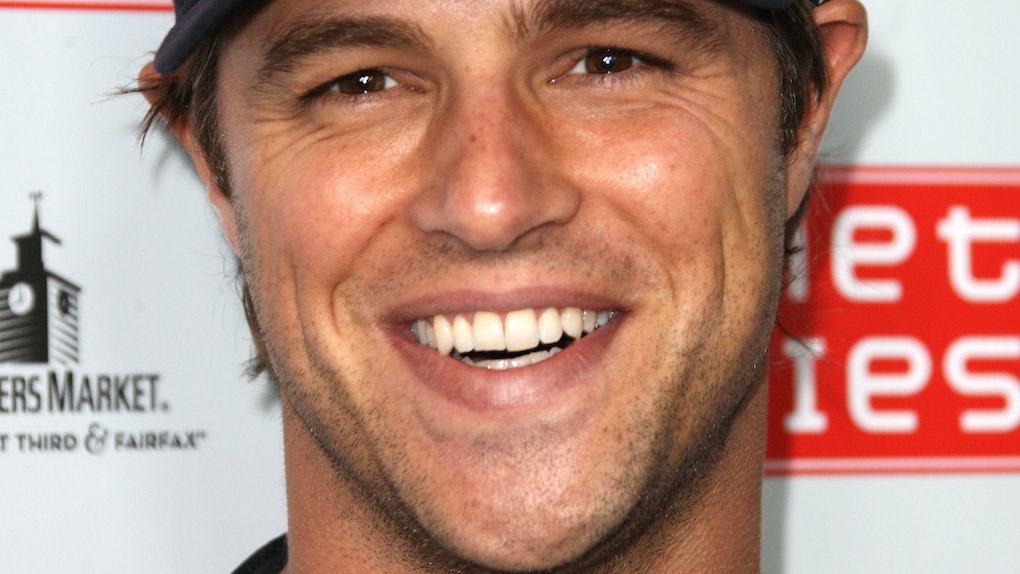 I don't know about you, but I love myself a good how-we-met story. For example, my boyfriend and I met at a bar when he drunkenly decided to get down on one knee and propose to me (a total stranger, as far as he was concerned). The whole thing was hilarious and I, personally, thought it made for a great story. But after reading about how Sam Page met his wife Cassidy Boesch, I think my pitiful little bar encounter sounds like CHILD'S PLAY. Seriously, you guys. The story is adorable.

In a recent interview with Cosmopolitan, the actor opened up about how he met his wife of nearly four years, Cassidy Boesch. “One year, my best guy friends and I made a solemn promise to stay single the whole summer. Two weeks later, I met my wife," he explained. "I went to my friends and said, ‘Hey, guys. So, I meant that promise when I made it, but... I’m out.’ I hadn’t been looking for a relationship, but I recognized the greatest person in my life when I saw her.”

The GREATEST PERSON IN HIS LIFE?! Are you freaking kidding me? That's what fairytales are made of. How many straight dudes are sensitive enough to recognize something like that?

“Growing up, I probably read Cosmo more than most girls," he admitted to the publication. "I have two older sisters, so it was always in the house. I was like ‘Wait! They just leave these lying around?’ I learned a lot. Women’s magazines are very forthcoming. Men play it a lot closer to the vest."

Yep, he's an extremely hot straight man who believes in love at first sight and reads women's magazines. This is not a drill, people. Unicorns really do exist.

He eventually married this amazing women in a beautiful ceremony held at a villa outside of Santa Barbara, California in November of 2014. He simply captioned a photo of the two of them locking lips by the altar, "making it official." He also used Instagram to post another adorable picture from that day, a selfie of himself and his groomsmen (presumably the friends he had promised to be single with) with the caption, "On the runway, first class, about to walk down the aisle, and this is my groomsmen detail. Great men all of them. #cassidyandsam."

Since tying the knot four years ago, Sam and Cassidy have experienced plenty of milestones, including having their first child, a son named Logan, back in 2016.

He took to Instagram to announce the birth of his son with an adorable picture of his baby leaning against their golden retriever dog.

"The newest, best and brightest part of my life hanging out with the chillest and hairiest part," he shared on Instagram. "These two are going to learn a lot from each other."

He also added as part of the caption, "Welcome to the world, my son Logan."