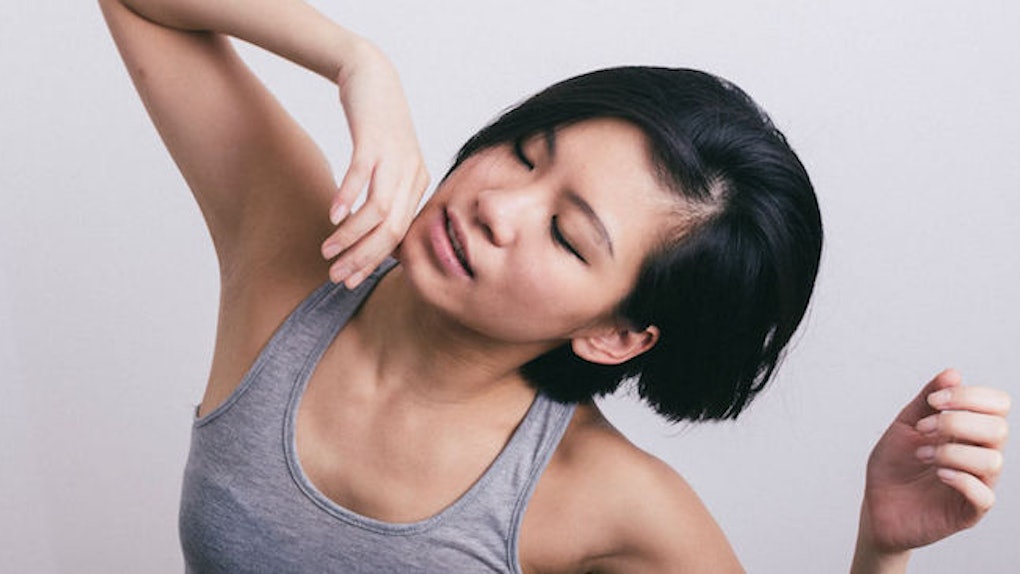 You've probably heard that idiomatic phrase "the nose knows," but what you might not know is how accurate those words actually are. Let me explain: A new study says that breathing through your nose is amazing for your brain health, so it might be time to start taking better care of your good ol' schnoz, my friends. Seriously, though, noses aside, the way breathing affects your brain isn't something that can be ignored, and it's pretty interesting how the latest research continues to discover just how much the simple act of breathing affects the rest of your body, and of course, your brain.

So let's talk about this nose study, shall we? According to ScienceDaily, researchers from Karolinska Institutet in Sweden recently published a report in The Journal of Neuroscience that revealed how breathing through your nose, rather than your mouth, is apparently really good for boosting your memory.

To conduct the study, as per ScienceDaily, the researchers had their participants learn 12 different smells in two separate sessions. After the participants learned the first set of smells, they were asked to breathe through either their mouth or nose for one hour. When the hour had passed, the subjects were presented with the old smells once again, as well as a set of 12 completely new smells, and the researchers asked them to identify which session (the first or the second) each scent had come from.

According to the study, the researchers found that the participants' ability to distinguish between the different scents was much stronger when they were asked to breathe through their nose, rather than their mouth, between the time of learning and recognizing all of those smells. In other words, breathing through your nose appears to strengthen your memory in one way or another — like I said, guys, the nose knows. Do not fight me on this.

Dr. Artin Arshamian, a researcher at the Department of Clinical Neuroscience, Karolinska Institutet said in a statement, as per ScienceDaily,

Our study shows that we remember smells better if we breathe through the nose when the memory is being consolidated — the process that takes place between learning and memory retrieval.

The idea that breathing affects our behavior is actually not new. In fact, the knowledge has been around for thousands of years in such areas as meditation. But no one has managed to prove scientifically what actually goes on in the brain. We now have tools that can reveal new clinical knowledge.

Nancy Gerstein, a yoga teacher, author of the book Guiding Yoga’s Light, and founder of Motivational Yoga, confirms how powerful the breath can be for your well-being — and she says some students in her yoga classes ask her one question in particular about how to breathe: "As a yoga teacher, my new students always ask, 'Should I breathe out of my nose or my mouth?'" Gerstein tells me over email. "This is one of the greatest questions in yoga because the answer teaches us all about the powers of the breath."

When it comes to yoga specifically, Gerstein says it's important to breathe through the nose. "Prana (the body’s life force) can’t be fully absorbed into the nadis (the body’s energy channels) from breathing through the mouth," the yoga teacher explains. "It can only be fully received through nose breathing."

Not only does breathing through your nose stimulate your brain and focus the mind, says Gerstein, but the nose is also a miraculous filter for your body, as your nostrils are lined with tiny hairs called cilia. According to the yoga teacher, those little hairs help to warm or cool the air you're breathing before it enters your lungs. As a result, she tells Elite Daily, "breathing through the nose allows us to have a complete and even breath that calms the nervous system, lowers our heart rate and blood pressure, and clears the mind."

As for breathing through your mouth, Gerstein says this can raise your heart rate, increase dehydration, cause your body to go into fight-or-flight mode, and overall, she says it inhibits your ability to enjoy a complete, satisfying breath. "The late yoga master B.K.S. Iyengar has been quoted as saying, 'The nose is made for breathing, the mouth is made for eating.' So, if you breathe through the mouth, I will have to feed you through your nose," Gerstein jokingly tells me.

If breathing through your nose feels a little unnatural to you for one reason or another, Veronica Parker, a kundalini yoga teacher and meditation coach, says there are plenty of simple, effective ways to start getting into the habit. For example, the "one minute breath," according to Parker, is an empowering form of breathing that can help to alleviate feelings like fear and worry, and promote mindfulness and presence.

What's most important here, according to Parker, is that your inhales and exhales are balanced and equal in terms of length. "Practice this for three to seven minutes to start. Your goal is to do it for 31 minutes," she explains.

"Breathing through the nose allows us to have a complete and even breath that calms the nervous system, lowers our heart rate and blood pressure, and clears the mind."

Breathing through only your left nostril for just a few minutes, Parker explains, can help you feel more at ease in a moment of stress. For the meditation coach, she tells me, she likes to do this right before going to sleep, when her mind tends to feel especially restless. "Also, I love to practice it when I’m feeling jittery right before I’m about to take off on a plane," Parker adds.

Rest assured, left nostril breathing is super easy, guys. Here's how to do it: Start by sitting in a comfortable position, then "close your right nostril with your right thumb, and have your other fingers stretched straight up pointing to the sky," Parker explains. "Your left hand will be in your lap with your index finger touching your thumb. Close your eyes and focus on your third eye, in the middle of the forehead. Begin to breathe deep and long through your left nostril. Continue for three minutes."

Not feeling either of these breathing practices? Try the "2-1 breathing technique," which is another of Parker's favorites, she tells me.

Here's how this one is done: Sit comfortably in a chair, on a mat, or even a cushion, keeping your spine straight, and your eyes gently closed. Begin by inhaling through your nose slowly and deeply, Parker explains, to the count of four. Exhale through the nose fully to the count of eight, and continue this for about three to five minutes, she says.

Then, open up your eyes, Parker says, and notice what has changed within you. "It’s important to take your time, not just to practice these breathing techniques, but also when you are finished," she explains. "Try not to get up right away and go rushing about your day. Rather, take at least one to two minutes after you finish the exercise to pause, breathe, and notice how you are feeling."