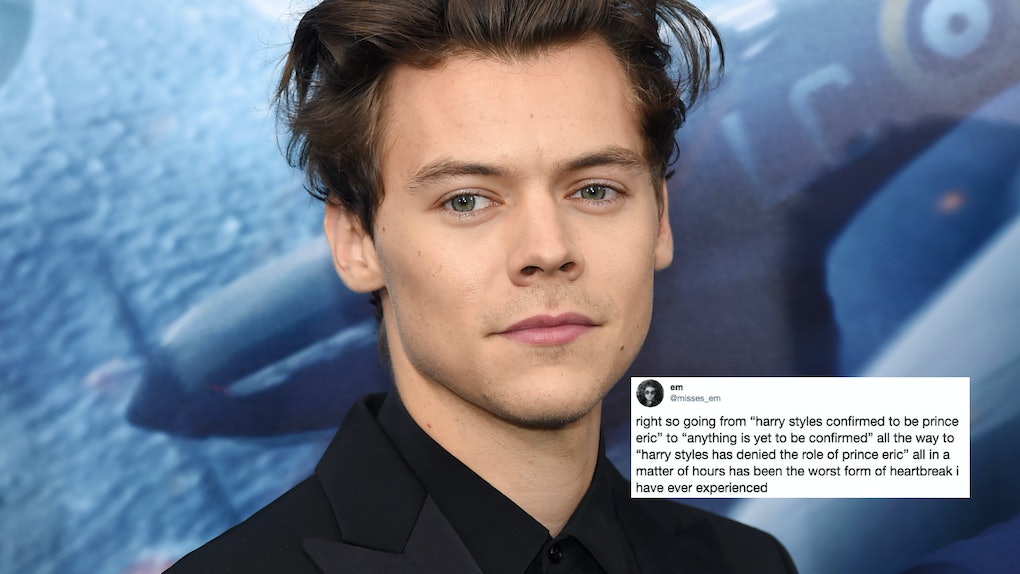 It looks like Styles playing Prince Eric was never actually a done deal. According to Variety, "initial reports about his casting were premature" and Styles, while he was seemingly offered the role, he reportedly passed on it. He won't be going under the sea anytime soon.

To give you some context, in July, early reports saying Styles was "in talks" to play Prince Eric started surfacing. On Tuesday, Aug. 13, it was reported that Styles had officially booked the role, causing the Styles fandom to lose their sh*t in excitement. AMC Theaters tweeted that the casting was confirmed, but the tweet was quickly deleted, causing mass confusion.

Later that night, reports that Styles had declined the role came out, and here we are. Just goes to show that when it comes to movie casts, don't believe anything you hear until it comes from the people making the movie, especially when it's Disney. They have the money and resources to recast literally anything at literally any time, so don't sleep on the idea that they can change a casting decision on a dime.

Now that Styles isn't playing Eric (the hottest Disney prince... fight me), the Styles fandom feels like a bunch of clowns for believing it was going to happen.

Seriously, they're tweeting a bunch of clown memes about it.

Halle Bailey is still playing Ariel, however. That's been confirmed by Disney and Bailey herself. Melissa McCarthy is still reportedly playing Ursula, although McCarthy hasn't confirmed it.

In an interview with Jimmy Kimmel, McCarthy downplayed her reported involvement in the film, playing coy by saying if it were to happen, she'd be excited. That could mean she's not fully locked in as the tentacled sea witch just yet, or it could mean she is, but is not able to talk about it in interviews.

Reports that Javier Bardem is in talks to play King Triton have so far not been refuted, but as Styles has made clear, these people could dip at anytime. Jacob Tremblay is reportedly in talks to play Flounder (aw!), and Awkwafina has reportedly been tapped to play Scuttle (excellent). The Little Mermaid is my favorite Disney movie ever and is one of my favorite movies of all damn time in general, so the fact that they have an Oscar nominee and the best character actor ever, Melissa McCarthy, tapped as Ursula, and Oscar winner Javier Bardem tapped as Triton is the respect. This. Film. Deserves.

Hey Disney, if you're still in need of someone to voice some characters in this, I'm available! Unlike Harry Styles, I will accept literally any role you offer me. I will be a fish. I will be a singing flamingo that only appears in "Kiss The Girl." I will be one of Ursula's seaweed creatures that look like Mitch McConnell. I will literally play anything you want me to, just pick me. Choose me. Love me.

More like this
Emma Stone's 'Cruella': Premiere Date, Trailer, Cast, Plot, & More
By Abby Monteil and Dylan Kickham
'Thor: Love & Thunder' Cast, Plot Details, Premiere Date, & More
By Ani Bundel
Here's How To Stream 'Nomadland' So You Can Finally Get The Hype
By Rachel Varina
Stay up to date