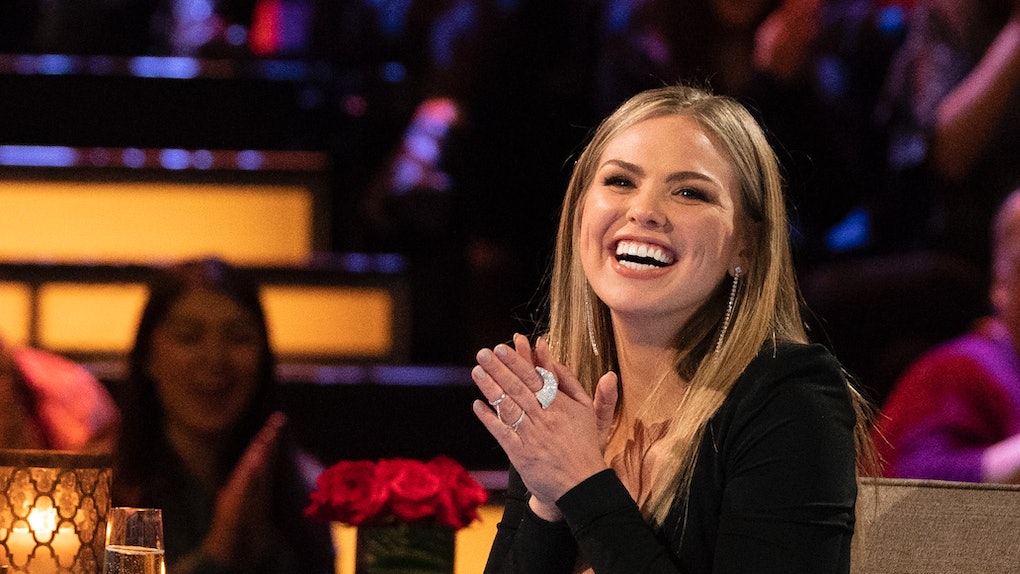 The Tweets About Hannah B. On "Women Tell All" Appreciate Her Mature & Vulnerable Outlook

Hannah B. is back in business as a befuddled beast on The Bachelor. She got off to a rough start with Bachelor Nation, but before we knew it, the former Miss Alabama had risen to a cool and graceful persona who knew her worth by the time Colton Underwood eliminated her. Her time on March 5's "Women Tell All" episode was dedicated to one of her earliest goofs when she was tongue-tied over a toast on her first date with Colton, but she delivered a new, mature version of the awkward moment. The tweets about Hannah B. on "Women Tell All" appreciate her vulnerable take on her Bachelor experience, and I hope everyone is blessed someday with as smooth of a transformation as hers.

In case you forgot, Hannah always had a hearty "Roll tide!" prepared for her on-camera moments, but when it came to her first private moments with Colton, she faltered. Colton asked her to deliver a champagne toast to commemorate their day together, but Hannah awkwardly laughed it off. This inspired Colton to wonder if she would struggle in opening up, but the rest of the date turned out perfectly fine. Dealing with her insecurity about Caelynn's popularity for the following weeks, Hannah later struggled with not feeling liked.

But when Colton sent her home right before hometown dates, Hannah seemed to get that he wasn't meant for her, telling cameras, "I will not allow myself to not feel chosen every single day, and I’ll wait ‘til whenever that is."

Bachelor fans took a while to warm up to her, but it looks the tide is turning in Hannah's favor. You go, girl!

Becoming an unlikely fan favorite, Hannah kept her cool for most of the "Women Tell All" episode. Before spending time in the hot seat, she played the diplomatic card when she backed up Katie's version of Caelynn and Cassie's Bachelorette conversation and refused to discuss the specifics of her pageant past with Caelynn. Between her cool-headed contributions and fierce wardrobe choices, Bachelor Nation mostly liked what they were seeing.

Perhaps sensing how people would now see her, Chris Harrison wanted to keep Hannah humble. He nudged her to open up about her struggles with perfection, and Hannah explained how she once thought she'd marry and start a family right out of college. Then never understanding why she should settle for someone unexciting, Hannah voiced the motto of the year when she talked about wanting everyone to love someone fiercely.

"For so long I thought my life was going to be a certain way," she said. "[Colton] jumped a frickin' fence for Cassie, [but I want someone] to choose me no matter what."

How can I set her motivational speech as my new ringtone?

Harrison then gave Hannah the chance to redo her ill-fated toast from the first one-on-one date with Colton. She managed to deliver a more composed toast (with a Roll Tide nod, of course). Twitter had some thoughts about Hannah's second chance and how she came across, and while a few viewers weren't fans, many continued to love her wise take on her experiences.

We still have to wait another week for the big announcement, but based on the Twitter buzz, maybe we can expect to see Hannah B. take over the reins of the next Bachelorette season. If she can keep rolling out both hilarious and wise one-liners like she did tonight, we'd be in for a fun ride.

The Bachelor continues on Monday, March 11, at 8 p.m. ET on ABC. The season finale airs on Tuesday, March 12.